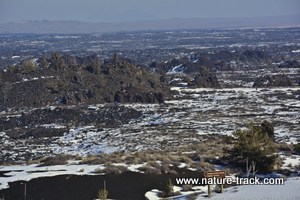 Lava flows from the Great Rift created the raw and wonderful world of Craters of the Moon National Monument and Preserve over a period of about 12,000 years.

Shoshone legend tells of a serpent on a mountain that, angered by lightning, coiled around and squeezed the mountain until liquid rock and fire shot from cracks, and the mountain exploded.

Is it the fanciful imaginings of a primitive culture? As I gazed across the rugged landscape of the Great Rift last week, I didn't think so. In fact, the most recent volcanic activity there was 2,100 years ago, so the description was likely from eyewitness accounts.

The Great Rift is a fault in the Earth's crust, running more than 50 miles northwest to southeast from the Craters of the Moon lava field near Arco to the Wapi lava flow near the Snake River south and west of Aberdeen.

It all started about 15,000 years ago. As a weak point in the crust, the Great Rift provided a pathway for lava to wriggle to the surface. For about 12,000 years, the Earth's molten mantle would ooze, spray, spit and erupt, with each successive flow covering the last or finding a new path.

In eight eruptive periods, 60 lava flows were formed that are still easily visible from space.

The forces at work weren't as awesome as the explosions of Mount St. Helens, but they were impressive. Imagine lava snaking through tubes up to 50 feet in diameter for up to 45 miles. Or envision lava flowing like blood from a massive wound, or blowing out like huge cannonballs.

For instance, at King's Bowl at the top end of the Wapi flow at the southernmost end of the rift, lava pushed up through ground water, flashing the water into steam and blasting a jagged crater 280 feet long, 100 feet across and 100 feet deep in the crust and an ice cave beneath.

Black lava oozed and spread in great thick waves over the millennia, changing more than just the color of the landscape. When impervious flows blocked its path, the Big Lost River was pushed north severing its link to the Snake River and forcing it into the sinks basin near Howe. Even the mighty Snake was bullied far to the south by advancing and indomitable lava flows.

When I first heard of the Great Rift, I envisioned a large crack or fissure in the surface lava. While that is true in places, it is only part of the story. The rift is really a series of cracks, not a single one. And more, the thousands of years of lava flows have created cinder cones, shield volcanoes, spatter cones, lava tubes, ice caves, craters, blue dragon lava and giant fields of ropelike pahoehoe lava and jagged 'a'a lava along its length. Some are barren and rough as if they had just cooled yesterday; others are weathered and filling with windblown soils, sediments and native plants.

If the ninth eruptive event were to happen today, we would likely call it a natural disaster and try to find some way to prevent or somehow control it. Too bad we just can't enjoy the process.