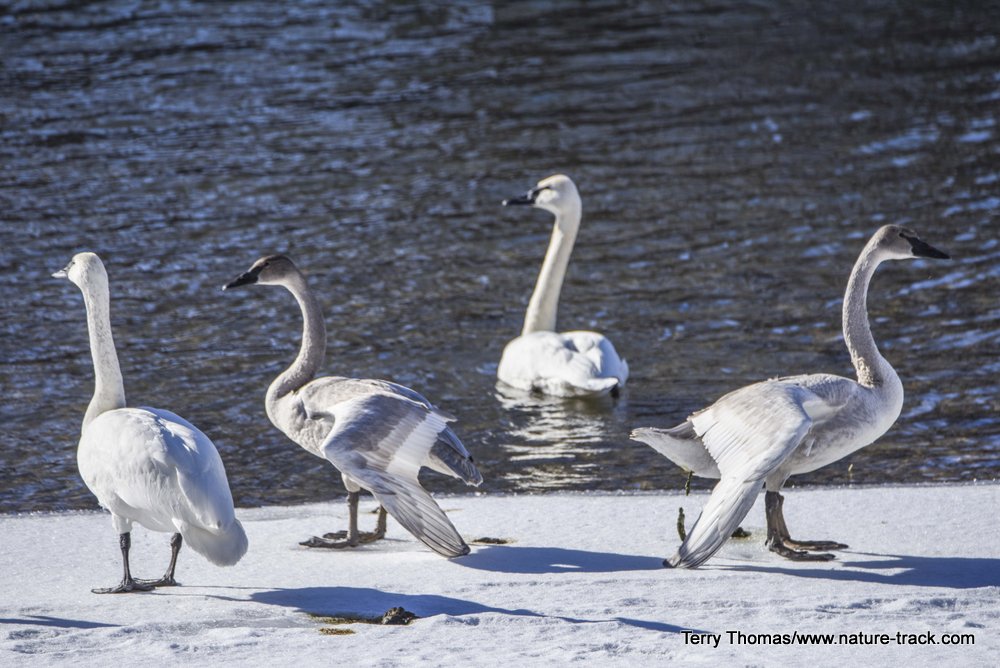 Swans and other waterfowl can stand on ice and swim in freezing water because their feet are designed to withstand the cold through heat exchange.

Last week I was caring for my son’s new German Shorthair puppy, Moose. As we walked on the snowy streets of Herriman, Utah, it didn’t take long before Moose began showing signs of having cold feet despite his excitement about being on a walk. He would arch his back, lift one paw at a time and whimper, then charge on, only to repeat it a bit later. He seemed happy to go back inside at the end of his exercise.

Inside, I immediately exchanged my boots for slippers, intent on keeping my own toes from suffering like Moose’s did and wondering if he needed boots too. That experience led me to think of wildlife and how they keep their feet and other extremities warm in the winter. They have no warm house, no slippers, no heating pads, yet their feet don’t freeze off. There must be a secret or two.

For hoofed animals, one strategy is that they have hooves. Hooves are basically toenails and do not require a good blood supply. This gives them an insulating layer between them and contact with frozen ground, snow or ice.

At rest, many animals curl their legs beneath them to take advantage of the body’s mass and heat. Animals with long tails, foxes, squirrels, coyotes and wolves, for instance, can also use their furred tail to protect feet, ears and noses.

Animals that live in extreme cold, such as the Arctic fox, may also have shorter ears and legs for less exposure. This follows Allen's Rule, which states that certain extremities of animals are relatively shorter in the cooler parts of a species' range than in the warmer parts.

For most animals in the cold though, blood flow seems to be their primary defense. Logic would dictate that in cold weather, more warm blood should flow to the extremities. After all, a common complaint from people with poor circulation is cold hands and feet. However, with animals that must live outdoors, sending warm blood gushing to their feet, ears and tail could be deadly if it causes them to burn through too much energy or cools the rest of their body below a threshold.

The strategy then, is really to maintain the extremities, especially feet, closer to the temperature outside (ambient temperature). Part one of this strategy is that, as a rule, the lower portion of an animal’s leg is largely tendon, ligament and bone, requiring less blood than muscle to function.

Part two of the equation for, if not warmer feet then feet that don’t freeze, is called countercurrent exchange.  In this, animals have veins with cold returning blood lying next to arteries with warm blood from the heart. Heat passes down the gradient, so the warmth of the arterial blood is shunted to the colder venous blood. When the arterial blood reaches the extremity, it is cool and thus loses less heat to the environment and maintains just enough heat to keep things from freezing.

The other advantage of this system is that the warmed venous blood that re-enters the heart doesn’t cool the body’s core. This trade-off, cold feet for a warm heart, is critical to the overall survival of the animal.

In waterfowl, this system of heat exchange is highly developed. In what is called, rete mirable, or miracle net (Latin), veins and arteries are interwoven together in a fine net that allows for even better heat exchange.

Puppy Moose, it turns out, really doesn’t need boots. He is built to tolerate the cold feet, but since this was his first winter, learning about snow was just a bit of a surprise.