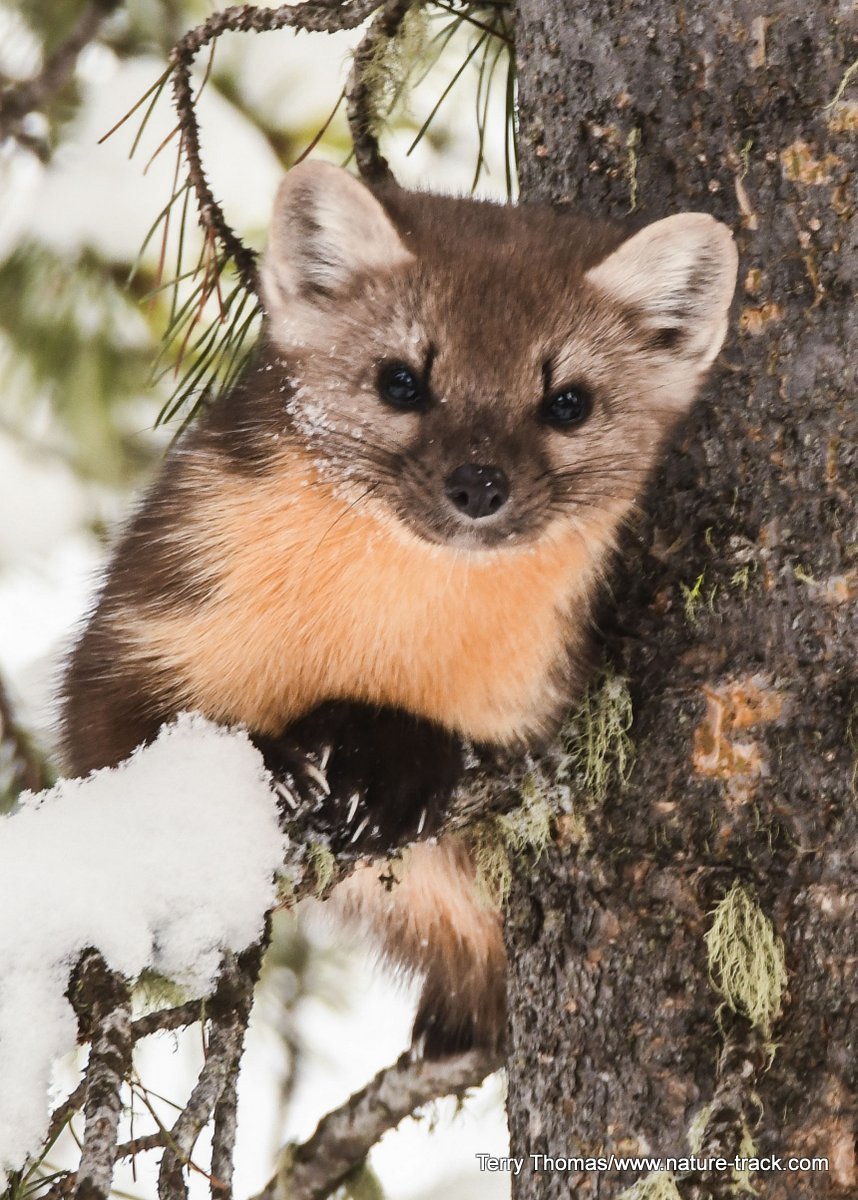 The internal bone framework of this pine marten is held together at a series of joints that allow incredible flexibility and movement while still providing support for the body.

The pine marten bounded effortlessly across the snow in my yard, curiously looking up each tree, climbing a short distance up a few of them before doing an about-face and scampering back down. I marveled at the fluidity of its movements, all made possible because of an articulating skeletal system.

In the vertebrate world, all our muscles are given strength and form by an internal skeleton. This skeleton is made from inflexible bone and would make for some pretty awkward movement if it was one solid piece. But it is not. The human skeleton, for instance, is comprised of 206 bones. Many mammals have a similar number of bones—a horse has 205, a mouse has 225 and a right whale has 177. Because of fusing of bones and weight restrictions necessary for flight, birds often have fewer bones than mammals. For instance, a turkey has 200 bones and a chicken only has 127.

The secret to movement is that these bones are connected with a series of joints, often called articulations, that provide the flexibility needed to do the amazing things animals do. Because these bones often articulate on both ends, there are many more joints than there are bones in a body. For example, humans, with 206 bones, have 360 joints.

Joints can be classified in a number of ways, depending on how the joint moves and functions. There is usually significant overlap between any type of classification though as joints run a long gamut of types.

Possibly the least common joint is the immovable type, known as a synarthrosis. The bones in these joints are very close together and separated only by a thin layer of fibrous connective tissue. The plates of the skull are of this type, joining together along tight suture lines. Teeth set into a jaw are also synarthrosic joints(specifically called gomphosis).

The second type is the semi-flexible joint known as an amphiarthrosis. In this type of joint, the bones are connected entirely by cartilage. Ribs connect to the sternum this way and vertebrae are connected via intervertebral discs.

The third and most common type is the fully articulating joint known as a diarthrosis or, more commonly, a synovial joint. This is where most of the variability comes in joint type and function. The most basic of these is known as a simple joint with two articulation surfaces and it moves in one direction like a hinge. But there are other joint movements such as pivoting, gliding, ellipsoid, saddle and ball and socket that are more intricate and are known as compound, complex and/or combination joints. The most complicated joint in the human body, the knee, is considered a modified hinge joint.

These joints are lined on the connecting surfaces with hyaline cartilage. This acts like a Teflon© coating and protects the ends of the bones from wear. They also have a space between the bones that is filled with fluid to lubricate the joint and to absorb shock. The ends of the bone are usually shaped to fit with their counterpart—if one is concave, the other is convex to fit it.

Since these synovial joints are not connected like the semi-flexible joints, ligaments, which join bone to bone, are required to hold the joint together. In addition, muscles, with their attaching tendons, help to anchor and strengthen joints. In humans, the importance of muscles in joint support is most easily seen in the rotator cuff of the shoulder. This group of four muscles essentially holds the shoulder together and allows for the incredible motion of the shoulder joint.

Joints give our otherwise rigid skeletons the ability to move and for vertebrates to thrive. If humans wear out a joint, it is common practice to get an artificial replacement. For animals, losing the use of a joint and the mobility it offers is usually fatal.