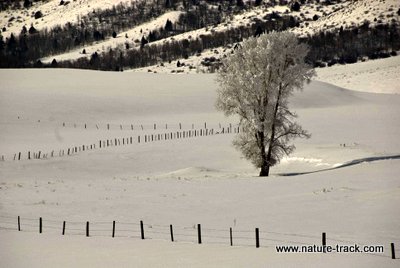 Well before the snow, ice and cold get serious, plants are preparing for the upcoming freezing weather.

If I get fed up with shoveling snow and layering up for the cold, I can follow the birds to southern Arizona and enjoy some relief. Plants aren’t so lucky. Nothing is more tied to one location than a plant. Once that seed sprouts, the plant has cast all its dice into the game. It is a huge gamble and each plant lives or dies in that place. If roots can’t reach adequate water and nutrients, if there is too little or too much shade or if the place is just too dang cold, it will die.

It is this last one that is fascinating this time of year. How do plants keep from freezing when sub-zero temperatures reign for much of the winter? How do they survive cold in the winter when a lesser cold snap during the spring may kill them? They don’t produce their own heat like mammals and they can’t run or fly away from the cold so what do they do?

Although I will never be one to adore cold snowy weather, I do realize that over the course of winter I adapt to the cold. After a few weeks of single digits, 25-30 degrees can feel like a spring day, especially if the sun is shining. Plants essentially survive cold by getting used to it as well.

For plants, the process is usually referred to as cold hardening and it occurs at a cellular level. This is a process, triggered in part by the shorter days of autumn but even more directly by decreasing temperatures. A warm autumn can retard hardening but as temperatures slowly drop with the advance of winter, hardening will eventually begin.

This is a progression too, not a given moment in time. Hardening happens in stages, with the plant becoming increasingly more cold hardy after each stage. It may take weeks for a plant to completely harden.

Hardening can be reversed or increased depending on conditions. A few years ago, late February and early March temperatures were unseasonably warm. The west (sun facing) side of my apricot trees “woke up” and when temperatures suddenly plunged for several days in a row, the west-facing half of both trees died.  Conversely, if an extreme cold front settles in during mid winter, plants have the ability to harden even further to combat the decreased temperatures.

The process of hardening is both simple and so complex that botanists have yet to document exactly how it works. It is conceptually simple to recognize that in order to avoid freezing, water must be removed from the plant cells. How that works, exactly, still hasn’t been completely worked out. Botanists know that the cell wall becomes much more permeable, allowing water molecules to escape the cell, but the exact chemical triggers haven’t been identified. Whether or not scientists can pinpoint the exact mechanism, nature’s solution has allowed life to thrive in colder climates.

While I wouldn’t mind a bit more ability to harden against the cold, I must be cautious about hardening in other ways. It is far too easy to miss the beauty of life through a hardening of my attitude.