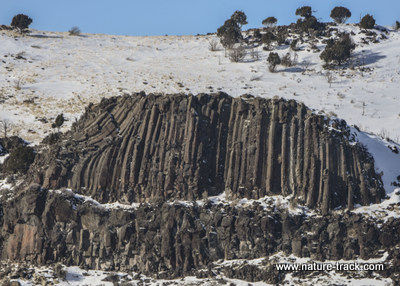 Columnar basalt, like this example from the Blackfoot River near Wolverine, is a remarkable geologic formation. This example contains both colonnade and entablature forms.

Over eons, volcanoes have done much of the heavy lifting in the shaping of Idaho. Lava, ash and other volcanic rocks known as volcaniclasts, have oozed, spewed, bubbled, flowed, drifted and blasted their way into all but four of Idaho’s 44 counties. Only the two northern most and the two southeastern most counties were shaped completely by other forces. By county, volcanic building blocks range from scattered fragments to wholesale lava fields still black and untamed by weathering.

Basalt is the main rock formed by volcanic action in Idaho. For instance, in Nez Perce County on the Clearwater River, basalt laid down 17 million years ago, makes up the great majority of the county’s geologic landscape. Basalt can be found on the surface at places like Craters of the Moon, but more often it is deeply buried and only exposed through millions of years of erosion. Then you may see multiple layers of basalt, sometimes separated by many feet of soil, sometimes one layer on top of another. It is clear that the formation of the landscape we enjoy today was a long hot process.

Basalt is the most common of all the volcaniclasts and is the foundation of oceanic tectonic plates, the core of many ocean islands such as Iceland and Hawaii, and is even found on the moon, Mars, and Venus.

Basalt forms from lava. Typically, it is not blasted from a classic cone volcano but rather, oozes from fissures that lead back to the molten mantle or crust of the earth. It is defined by its mineral content. Basalt is usually low in silica and high in iron and magnesium. It is considered fine grained which results from the lava cooling too quickly for large crystals to form.

Basalt is usually easy to recognize from its color. Unweathered basalt is coal black to dark gray. However, exposure can change it to brown or rusty red as minerals, particularly iron, oxidize. Even then, geochemical processes in some places in the world create basalt that is almost the color of sandstone.

Basalt can sometimes be recognized by a characteristic that is uncommon in other rocks—columns.  These columns can be several feet to several yards in cross section, up to hundreds of feet tall and may be three to seven sided, although five to six sides are far more common. Whether or not columns form depends on uniform cooling of the mass of lava, which contracts and fractures as it cools. As one column forms, it influences the cooling of surrounding lava and large collections of columns are created.

To get the feel for what columnar basalt looks like, think of a vertical bundle of six-sided fence posts. When the columns are stick straight, they are called colonnade. They are often fan-shaped or lean toward the horizontal as well though, and an irregular array is termed an entablature.

Columnar basalt occurs worldwide and creates some fascinating geological features. Giant’s Causeway in Ireland is a beautiful example of columnar basalt, as are Wyoming’s Devils Tower and California’s Devils Postpile. The latter two are both National Monuments.

There are many nearby examples of columnar basalt. Yellowstone’s Sheepeater Cliffs and the Yellowstone Canyon near Calcite Springs are both excellent examples.

In our country, just about anywhere you look you can find basalt. It is the foundation of some unique ecosystems and adds drama and interest to any landscape. Its presence provides a peek into the riotous history of this earth, a history I think I am glad I wasn’t around to witness.