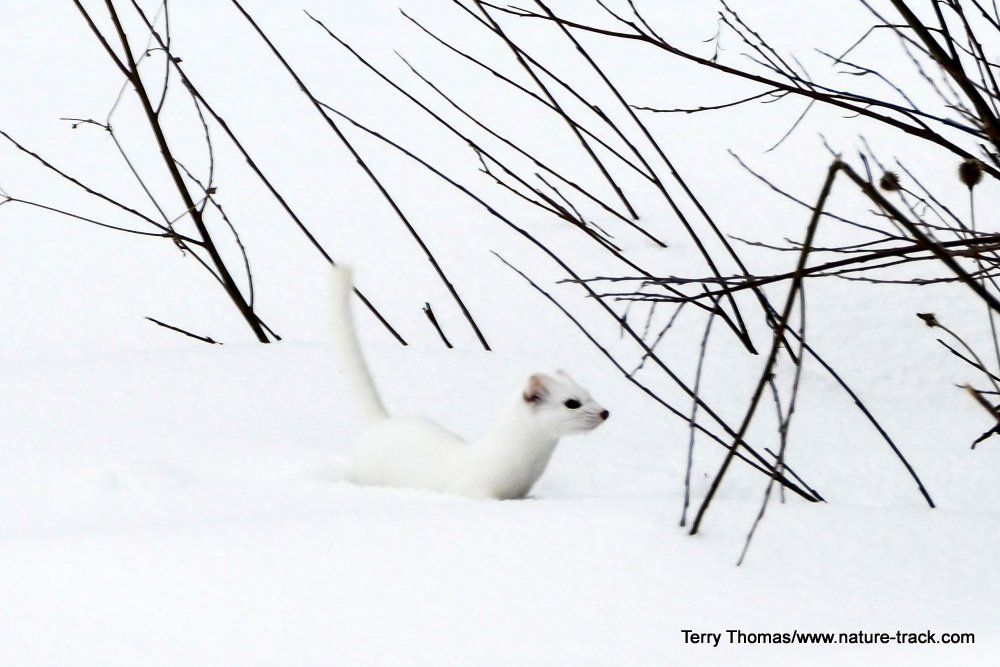 This long-tailed weasel has somehow lost the black tip to his tail, causing me to hope that I had seen my first least weasel.

The snow was deep near Pebble Creek in Yellowstone National Park’s Lamar Valley and it forced the big bull bison to use his head as a snowplow, smashing from side to side, clearing away the white stuff from the somewhat green stuff below. With new snow falling and his face covered in a crust of snow, it made for great photos and video and so I stood on the side of the road, cognizant of real snowplows and other vehicles while I tried to capture the scene.

There was something odd though happening behind the bison. Every couple of frames I would detect motion behind him. It wasn’t a bird; it was more like moving snow. Finally, I stopped and focused on this distraction for a moment. When I did, I gave a delighted shout. It was a weasel, dressed in its finest snow season coat of white.

Getting a photo of the little beast was nigh impossible. He zipped like a snowball across my field of view and I was about 25 yards away, shooting at a target not much larger than a hotdog. I was thrilled though, because members of his ilk, the Mustelidae family, continue to elude my camera, so any shot was better than no shot.

This weasel was all white, lacking the customary black tip on the tail. At first I thought it could be a least weasel, the smallest of the weasels with a short (less than 1.5 inches) all white tail. Yellowstone is a bit south of its accepted range, but the online Montana Field Guide listed dozens of sightings in Montana including a bunch just north of the park. However, when I enlarged the photos, I could see that the tail on this fellow was nearly half as long as his body. I consulted with my friend and fellow naturalist, Adam Brubaker, owner/operator of Tied to Nature tours of Yellowstone, and we agreed that it was a long-tailed weasel, the largest of the three weasel species in North America. How he lost the black tip of his tail is a mystery. Perhaps it served its purpose and a distracted predator grabbed for it instead of the weasel’s body.

Over the course of this past summer and fall I encountered weasels several times. They were always a joy to watch as they frenetically clambered over, under and through everything on the ground in search of food. Weasels have an undeserved reputation as bloodthirsty killers. Their extremely high surface-to-volume ratio body design (think a rocket with legs) comes with a metabolism like a coal-fired locomotive. Fuel must constantly be shoveled in, up to 30 percent of its body weight a day (a 165-pound human would have to eat 50 pounds a day to match that), just to stay ahead of what it burns. They can and do routinely attack and kill prey far larger than themselves, although rodents are their primary food, and they often cache what they don’t eat.

All three weasel species on this continent turn white in the winter and are routinely collectively called ermine when dressed in white. However, only the short-tailed weasel, Mustela ermina, truly deserves the moniker as its scientific name shows.

I don’t think I will ever get to the point where seeing a weasel will become, “Ya, just another weasel.” They remain one of my favorite animals and each encounter is a treat that can turn an otherwise grueling day into a memory.