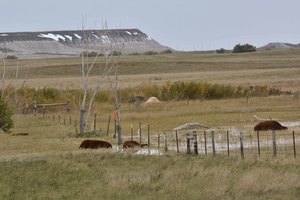 Dead livestock littered the rangeland in western South Dakota after a severe blizzard roared in and caught everyone unprepared in October, 2013.

The woman at Interior, South Dakota's only store/cafe/gas station/auto repair shop was happy to talk about the blizzard that less than a week previous had roared through western South Dakota. October temperatures had dropped from 90 degrees on Monday to below zero by Friday as 60 mph winds drove two to four feet of snow across the wide open Dakota countryside. She gravely indicated that the dead livestock we had seen a mile before town were victims of that storm, suffocated by driven snow. She concluded by telling us that officials estimated that one third of the livestock in the western part of the state had perished.

That pounding South Dakota blizzard ended up being one of the most significant yet under reported stories of 2013. It also brought to mind another storm, this one on January 12, 1888, that ravaged the Dakotas, Montana, Minnesota, Nebraska, Kansas and Texas. It too came on the heels of balmy days, in some places 74 degrees. Parents sent their children to school without their normal winter clothing, unaware that by afternoon, temperatures would plummet, dropping as low as -40°F before midnight.

An estimated four to five feet of snow fell and was propelled by hellish winds. Some teachers wisely held their charges at school to wait out the storm. Others though, dismissed the kids hoping they could find their way home. Dozens of children were hopelessly lost in the whiteout within minutes and suffocated or froze to death. In all, the storm claimed 235 lives, so many of them children that it has evermore been referred to as the Schoolhouse or Children's Blizzard.

That the death toll wasn't considerably higher can only be attributed to the fact that the storm blanketed a huge, but relatively sparsely populated area. A blizzard three months later, now known as the Great Blizzard of 1888, paralyzed a much smaller, but more densely populated area of the East Coast for weeks, killing over 400 people.

A blizzard is not just a big snowstorm. It is characterized by strong and sustained winds of at least 35 mph and lasts for three hours or more. When sustained winds push past 45 mph, temperatures plunge to 10°F or lower and whiteout drops visibility to zero, it is rated as a severe blizzard.  How much snow falls isn't really a part of the equation. In fact, it is possible to have a ground blizzard without snowfall when strong winds whip loose snow on the ground into a frenzy.

For a blizzard to form, three things must occur: There needs to be a cold front, moisture laden air, and warm rising air that ascends over the cold air.

Strangely, with a warming climate, these conditions are more likely to occur. Warming bodies of water may release more water vapor and warmer air can accept and hold more water. So, even though the average snowfall may decrease, the probability for severe blizzards may increase.

Blizzards are an awesome reminder that nature is still in charge and we had best respect that. Even the nicest winter day can quickly change into a killer blizzard for the unprepared.