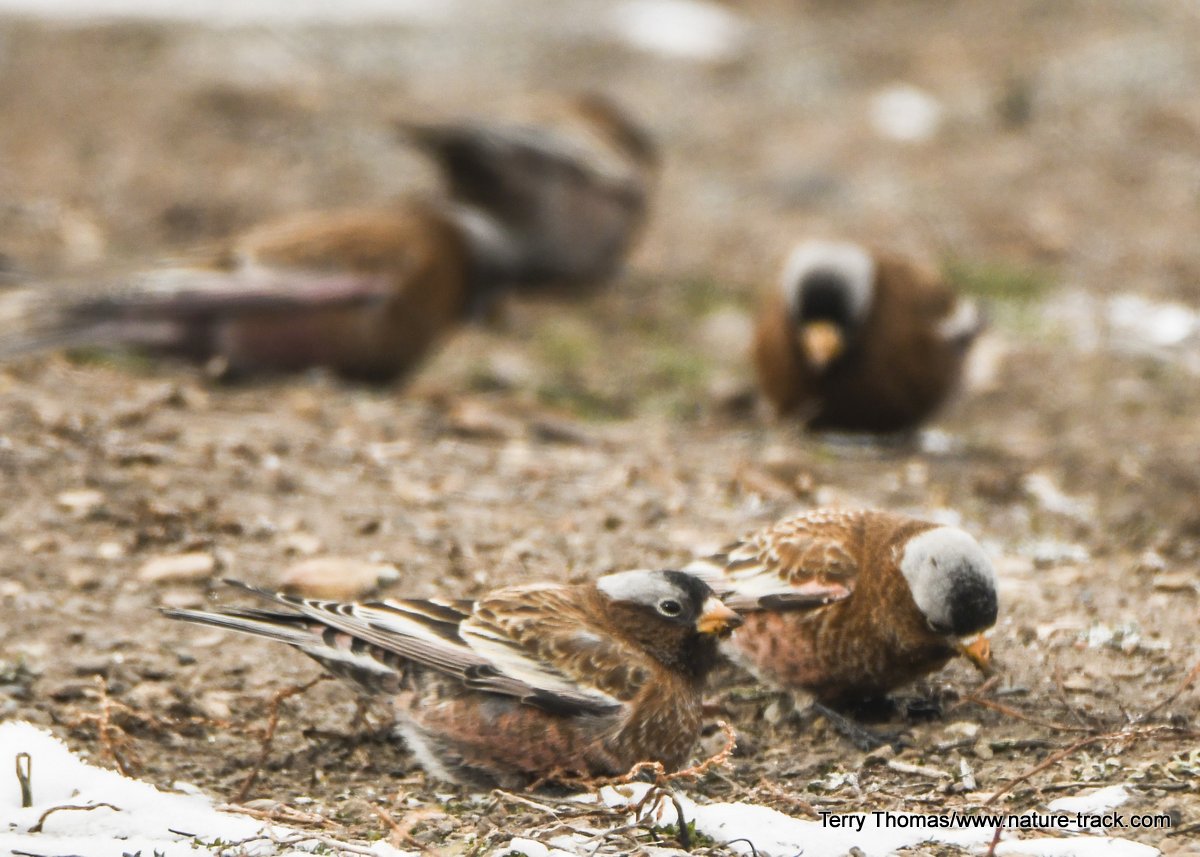 The black rosy-finch is much easier to find during the winter.

During the summer months, if you want to see a black rosy-finch, cinch up your hiking boots. The adventure will take you above tree-line and into the rocks, snowbanks and cliffs of the alpine world, about as high as you can go in any given area. These hardy little songbirds claim the highest ranges of the west as home and some biologists consider them one of the highest-elevation breeding vertebrates. Their range includes the highest mountains in northeast Nevada, Idaho, Montana, Utah, Wyoming and Colorado.

During the winter, finding black rosy-finches is a different story. These high-country denizens migrate vertically, meaning that they don’t really head south, but rather, just head to lower elevations in the same area. We discovered this last week in Yellowstone National Park where we encountered three different flocks of black rosy-finches along the road between Mammoth and Cooke City. These handsome chunky songbirds sport a gray cap that does not extend below the eye, a black forehead and chin, mostly dark gray to brown-black body with pink highlights on the wings and belly.

When snow piles up in the alpine country, it is not uncommon for these birds to find their way to bird feeding stations at lower elevations where they gorge on black oil sunflower and nijer seeds, preferring platform feeders or foraging off the ground. Sometimes they band together in huge flocks of up to 1,000 birds and forage along the margins of melting snow. They may also mingle with other species of rosy-finches or other small birds.

These are fascinating birds. For instance, the male defends a territory, but the territory isn’t a chunk of granite or a meadow. It is wherever his lady-friend happens to be. She is his territory and wherever she is, he is close by, ready to drive off intruders.

As might be expected, food is often scarce in the alpine world, requiring extended trips that may be up to 2.5 miles long. To facilitate this, black rosy-finches have a pouch at the bottom of their mouth where they can haul extra food back to the nestlings.

Black rosy-finches share a close relationship with brown-capped rosy-finches (of Colorado), gray-capped rosy- finches of the coastal mountains from Northern California to Alaska and the Asian rosy-finch of, well, Asia. These species are so closely related that from 1983-1993, they were considered a single superspecies. They also share relationships with other members of the finch family such as crossbills, evening and pine grosbeaks, goldfinches, Cassin’s finch, redpolls and more.

The crazy thing about black rosy-finches is that there are so few of them. The total population is estimated to be only 20,000 individuals with a very limited and disjunct breeding range. A breeding range map for black rosy-finches look like a bunch of amoebas scattered along the highest mountain ranges in the central portion of the Rocky Mountains. That alone is enough for Partners in Flight to list them as a Red Watch List species, with a Continental Concern score of 17 of a possible 20, a dubious honor they share with only 18 other bird species.

Part of the concern about black rosy-finches is climate change. As the climate warms, the breeding habitat for these birds will shrink as the treeline, the place where trees stop growing, creeps up hill. Since they already live at the tops of the mountains, there really isn’t much room for them to move. Some habitat will open up as the last of the permanent snowfields melt, but this may only delay the inevitable.

I hope that black rosy-finches will be able to adapt to climate changes that will transform their world. Until then, I would love to share my bird feeders with them.