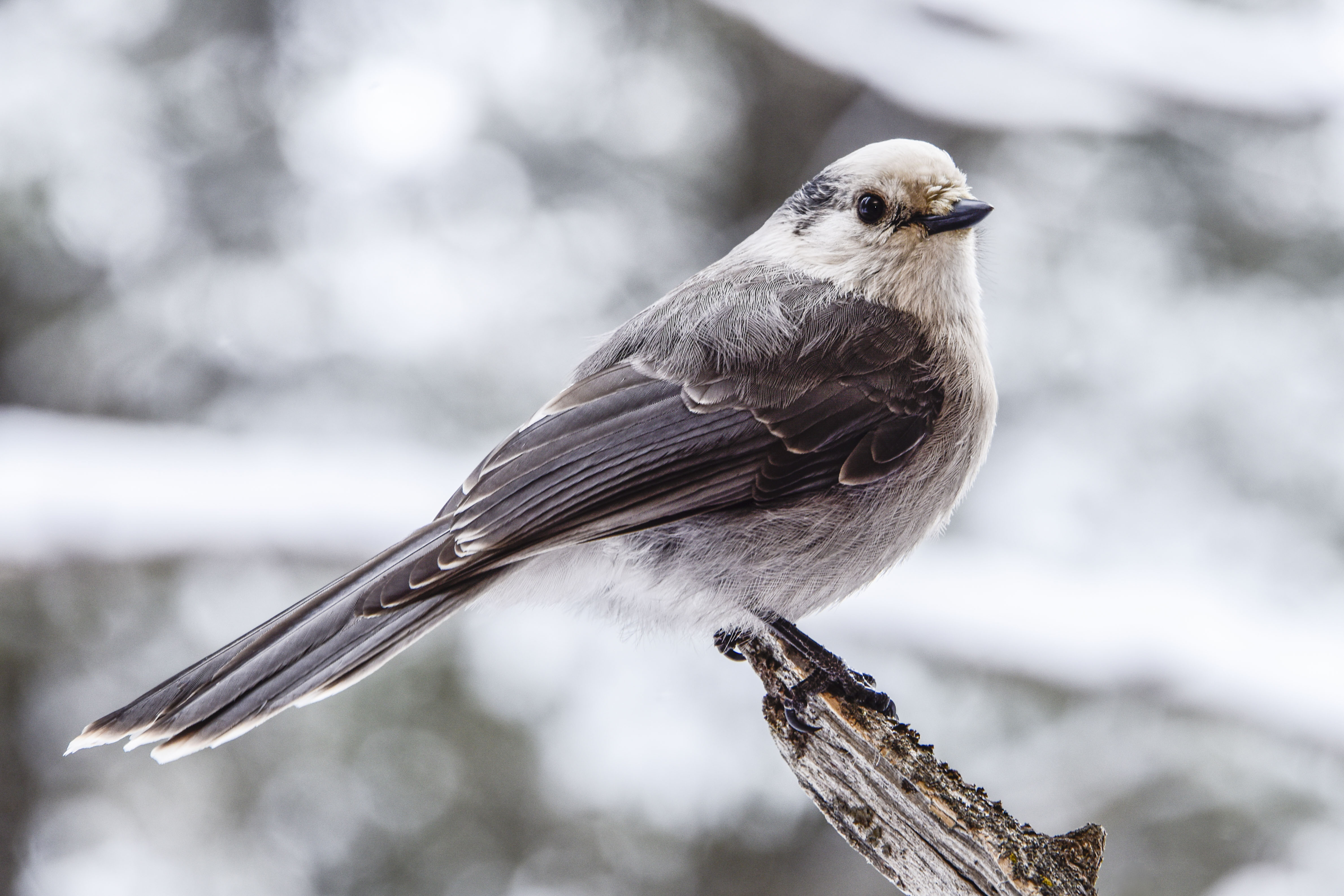 A gray jay, no scratch that, a Canada jay, poses for the camera in Island Park.

In Island Park, feeding birds during the green months is frowned upon. Bears are up and active and they will go to great lengths to get to a birdfeeder full of delicious nuts and berries (from their viewpoint). This often leads to conflicts with humans, conflicts the bear seldom wins. Many people I know anxiously await the onset of winter when bears are asleep so that they can put out birdfeeders for a couple of months.

It sometimes takes awhile to begin attracting birds so I was happy when three species immediately found my offering of peanuts and sunflower seeds. The sunflower seeds are being ignored, but the Stellar’s jay, Clark’s nutcracker and a Canada jay have absconded with every single peanut.

Yes, I said Canada jay, a newcomer in name only. Until this past 18 months, the Canada jay was known as the gray jay—a charming robin-sized forest bird with a light-colored head and chest and gray back and wings and larcenous habits that has earned it the moniker of camp robber. Actually, even that statement isn’t exactly true, for prior to the mid-1940’s it was called the Canada jay, so this is a return to a former name.

Common names and scientific names of wildlife occasionally change when taxonomists, scientists who study the relationships—genealogies if you will—of different species, find connections or lack thereof to other species. They look for differences and similarities and the advent of DNA analysis has challenged accepted norms and assumptions and clarified a lot of relationships with subsequent name changes.

Some birds, the gray partridge comes to mind, really didn’t change names, rather adopted a nickname that gained favor and common use. Gray partridge is often called Hungarian partridge or “Hun” although their name appears to have always been, gray partridge, a name that is being used more frequently these days in regulations and popular hunting articles.

However, neither was the case with the Canada jay. It was caught up in intrigue surrounding subspecies names and was sort of lost in time for a while.

The American Ornithological Society, a scientific body that’s responsible for the classification and naming of birds in North America, decided that the subspecies of birds with two or more subspecies would be named after their locale. Thus, if Canada jay was the main species name for Perisoreus canadensis, its subspecies would be called “Alaska Canada jay” or “Oregon Canada jay”. Since it was geographically confusing to have two location names in one name, they changed the main species name to gray jay. About a decade later, when the naming conventions for subspecies changed once again, the AOS admitted that gray jay could return to Canada jay, but this never happened.

Whether oversight or intentional on the part of the AOS, gray jay stuck and was the name I learned this bird by. And what does it really matter? To paraphrase Shakespeare, a gray jay by any other name is just as cool.