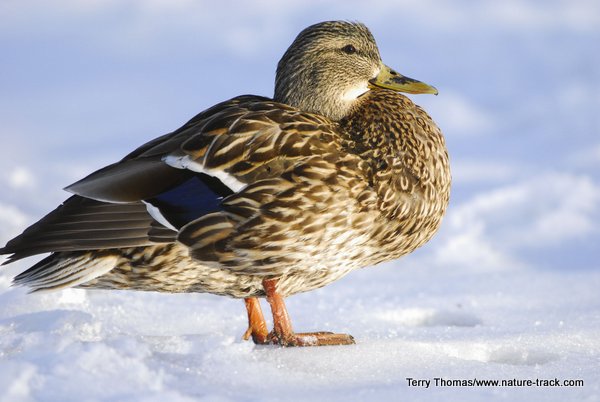 This mallard hen is standing on ice and snow as if it wasn’t cold at all. An amazing design keeps her feet from freezing.

Watching a mallard duck waddle across a frozen pond completely unfazed by the cold march, I wondered at how I would feel doing the same thing in bare feet. I suspect that pain and misery aside, it wouldn’t take long before my feet began to freeze into blocks of ice. Why then don’t duck feet freeze?

In a bit of brilliant natural bio-engineering, the duck uses a system of blood vessels, known as a countercurrent system, or more specifically, rete mirabile, to keep feet from freezing. This is a dense network of blood vessels formed by dividing up larger vessels into many small branches, like a net, and then re-uniting them into one trunk. Along the way, they intertwine with vessels containing blood flowing in the opposite direction and a heat exchange occurs.

So, in a nutshell, in the venous system, cold blood is rising toward the body from the feet. In the arterial system, blood at body temperature is headed toward the feet. As the venous and arterial veins split into many tiny vessels and intertwine, heat is transferred from the arterial side to the colder venous blood, warming it as it enters the body and thus maintaining the core temperature where it should be.

From the standpoint of the feet, the blood entering the feet is substantially cooler, lowering the differential between the feet and the environment. The blood flow to the feet is relatively constant. The goal is to keep the feet just above freezing, not warm and toasty. In this way, the duck’s feet don’t lose much heat to the environment and don’t freeze.

This incredible system of rete mirabile (plural retia mirabilia), which means marvelous network, isn’t just reserved for birds, or even heat exchange, though.

The giraffe has a problem that I get a hint of every time I tie my shoes and blood rushes to my head. With the giraffe though, the problem is greatly magnified, not in tying shoes but in getting a drink of water and lowering its head from 16 feet to the ground. Enter rete mirabile in the neck which equalizes blood pressure when its head gets below level.

Retia mirabilia are also found in the limbs of a number of mammals. As with the duck’s feet, this countercurrent system helps to reduce the temperature gradient and thus heat loss to a cold environment. However, cooling of the limbs also serves to reduce the metabolic oxygen demand by the muscles. A highly developed rete mirabile is part of how animals such as sloths and lorises can hang on to a branch long past what would exhaust another animal.

And, at last, back to birds. How do seabirds, which may spend their entire lives in salt water handle the massive amounts of salt they ingest? They use a countercurrent exchange into a “salt gland” via a rete mirabile. This gland collects the salt and then the bird “sneezes” out the brine.

That this incredible design crosses so many species and serves such different purposes is amazing to me. I truly do find it “mirabile”.