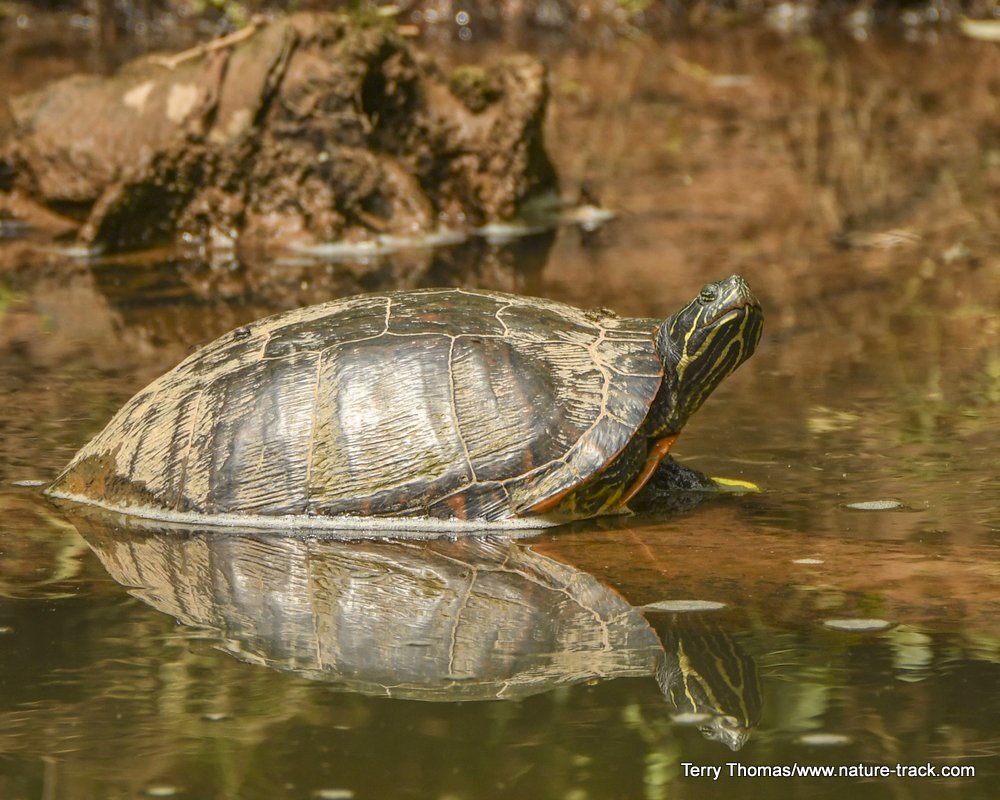 This turtle likely spends the winter tucked into the mud at the bottom of a pond or lake.

When the weather turns cold, mammals may grow an extra layer of fur. In a heartbeat, birds can abandon harsh landscapes and move to warmer locations. Humans may add a coat or crank up the thermostat. What about cold-blooded, or more properly termed, ectothermic, species such as reptiles?

Reptiles, including turtles, tortoises, snakes and lizards, don’t have hair, can’t migrate long distances, and will quickly freeze solid if left in sub-freezing weather simply because their body temperature is determined by the environment. They can’t shiver to warm up, hug each other for warmth or pull on a blanket. All they can do is head underground, hunker down and wait for warmer weather, much like a bear in its den.

In mammals this is called hibernation, a state of almost suspended animation where heart rate and respirations drop, sometimes to only a few a minute, and body temperature plummets to just a few degrees above freezing. It takes time to arouse from hibernation, during which time the animal is totally vulnerable. In this sense, bears are not hibernators and neither are reptiles. Theirs is more of a torpor, something between a long winter’s nap and hibernation.

For reptiles, herpetologists call this state brumation. As might be expected, brumation is largely triggered by environmental conditions. Falling temperatures and shortening days signal that it is time to brumate. Appetite and activity decline and the reptiles seek shelter.

For lizards, tortoises and snakes, this shelter takes the form of a hibernaculum, which is Latin for, “tent for winter quarters”. A hibernaculum is usually underground beneath the frost line and deep enough that the temperature can stay reasonably uniform.

Many species are solitary brumators, but snakes are often the exception. It is common to find dozens to thousands of snakes in a single hibernaculum and you may find several different species as well.

You may recall the tale of the home in the Upper Valley that was built on top of a garter snake hibernaculum. Garter snakes by the hundreds invaded the house when it came time to brumate, finally forcing the human occupants out.

Turtles often choose different hibernacula. It is common for turtles to burrow into the mud at the bottom of lakes and streams and wait out the winter there. During this period of inactivity and immersed in cold water, respiration needs are minimal and are met by oxygen absorption from the water by the turtle’s throat and cloaca.

Since the external world plays such an important role in signaling brumation, I was a little surprised to go into the Valley of Fire visitor center near Las Vegas, Nevada, in December and find a sign stating that the desert tortoise was “asleep for the winter”. In this indoor environment where light and darkness are artificially controlled and the temperature is always predictable, why would this tortoise brumate? It turns out that beside exogenous (external) triggers, there are also endogenous (internal) triggers that may initiate brumation regardless of the environment.  The mechanisms are still poorly understood but the process has been well documented anecdotally.

It is humbling to realize that what we consider simple creatures have found some pretty amazing solutions to complex problems such as death-dealing cold weather. Just think what they might have done with opposing thumbs!