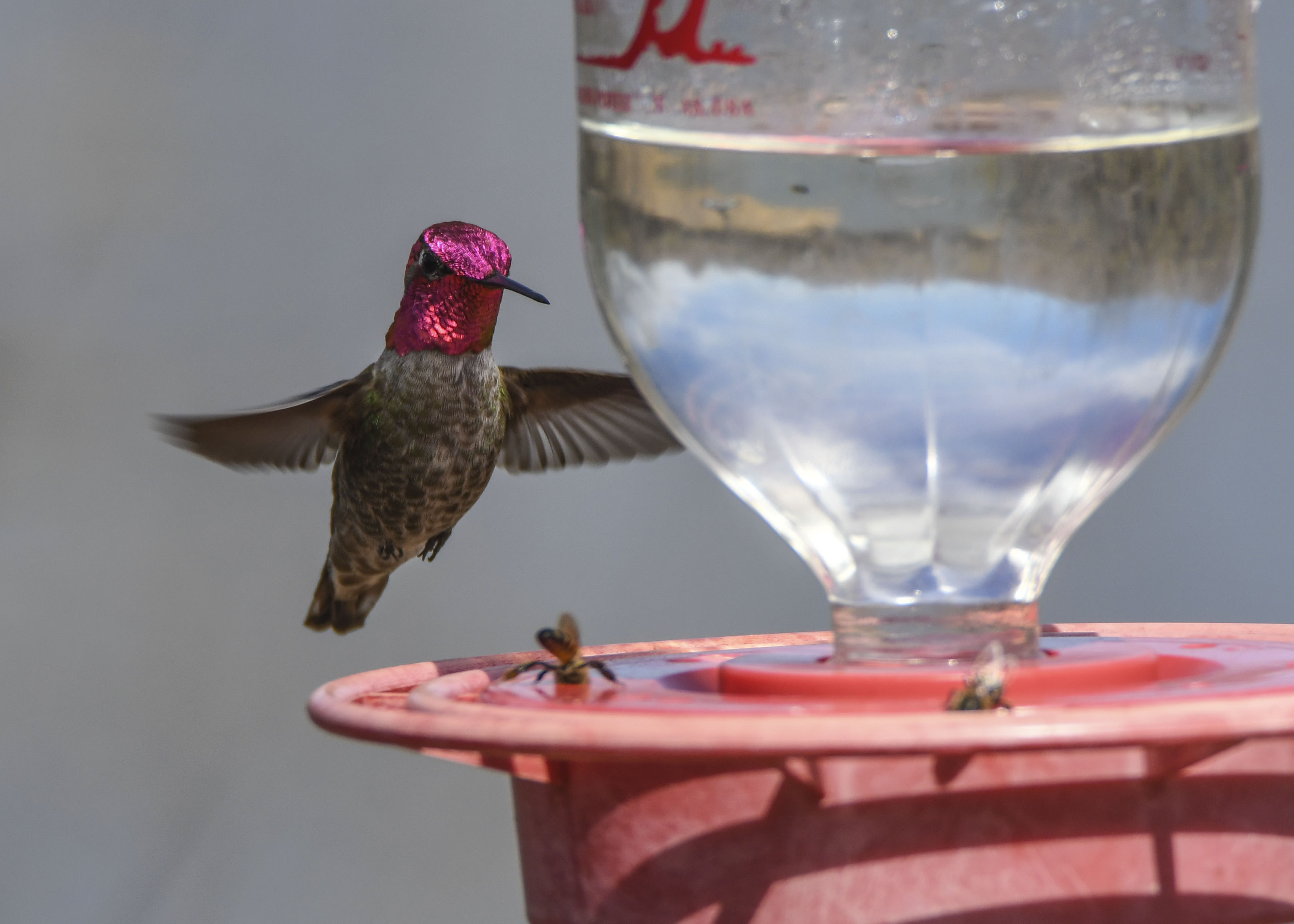 A shutter speed of 1/1250 did not stop the motion in the wings of this Anna’s hummingbird.

I am way impressed by the crazy amount of knowledge that my grandkids possess. I sit down with them to read a magazine like the National Wildlife Federation’s, Ranger Rick, only to have them start peppering me with questions I can’t answer, but they can. It is truly embarrassing for a so-called professional naturalist.

In case some of you other parents, grandparents, aunts or uncles find yourself in the same sinking boat I am in, I strove to compile a bunch of useless but fascinating and impressive facts from nature that we can use to be able to hold our own with the average Fifth-grader. So, here they are, in no particular order.

Did you know that:

The fastest hummingbird’s wings beat over 4,800 times a minute or about 80 times a second. Hummingbird hearts beat slower, up to 1,250 beats per minute. The fastest I can blink my eyes (I timed it) it about 220 blinks/minute.

For all the things elephants can do, there is one thing that they, uniquely among mammals, cannot do: jump.

An air molecule at room temperature is busier than a bee, traveling at 500 yards per second or nearly 1,000 miles per hour.

Speaking of molecules and atoms, each year, 98 percent of the atoms in our bodies are replaced. That spurs two thoughts: first, Am I really me? Second, maybe I actually can do a complete makeover and be better by next year.

The largest of the Great Lakes is Superior. It holds 3 quadrillion gallons, reportedly enough to flood all of North and South America to a depth of one foot. That is nothing though, compared to the Atlantic Ocean which holds 17 quadrillion gallons or 80 million cubic miles of water.

Energy from lightning heats the air anywhere from 18,000 degrees Fahrenheit to up to 60,000 degrees F. Raw iron ore melts at about 2,750 degrees F. Tungsten is the metal most resistant to heat and it melts at 6,150 degrees F. An acetylene/oxygen torch flame burns at about 6,332 °F. Lightning is HOT.

Light travels at 186,000 miles per second. At that speed, it would take 100,000 years to travel from one end of the Milky Way to the other side. Fathom that.

Measuring river lengths from headwaters to ocean discharge is trickier than it might seem and two rivers vie for the longest river: the Nile, traditionally accepted as longest, and the Amazon, longer only if you include the estuaries. However, the Amazon drains twice the area and has ten times the discharge of the Nile. China’s Yangtze River is third and the Mississippi is fourth. The Mississippi drains twice the area of the Yangtze but has half the discharge.

Spider silk is about twice as strong as steel of the same weight. The TV show, Mythbusters, tested this using 28-gauge steel wire vs. the equivalent weight of spider silk: 25,000 strands. The wire broke at 12.5 pounds while the spider silk held to 26.5 pounds.

The Common Poorwill is the only known bird species to hibernate. It hibernates for up to five months.

Birds aren’t known for having large brains but an ostrich’s brain is smaller than its eyeball.

You may think this is all a waste of time. I will remind you though, Ken Jennings of Jeopardy fame didn’t become a millionaire by watching soap operas. Winning 3.5 million dollars, he proved trivia is no idle pursuit. Better still, some of these facts might help you “wow” a kid in your life and that is worth even more.