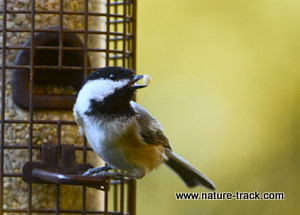 Black-capped chickadees are a favorite bird of Americans and readily visit feeders and suet blocks.

I have to admit that my attempts to attract birds to my backyard have met with limited success. Oh sure, we have great flocks of house finches and house sparrows, who doesn’t? And starlings, magpies and collared doves seem to increase yearly. However, the “cool” birds are rare indeed. We’ll get occasional visiting royalty but not like what so many others have.

This winter though, a pair of black-capped chickadees has graced our yard, quickly earning their reputation as one of America’s favorite backyard birds. We still don’t see them every day, partly because we are often at work when they like to breakfast at our suet feeders or race off with a few sunflower seeds.

Black-capped chickadees are  backyard champions for a number of reasons. They are easy to recognize and, with the apparent exception of my yard, are easy to attract with bird feeders. Further, they are curious and tolerant of humans, even to the point of taking food by hand after a bit of training.

Beyond that, black-capped chickadees are often described as “cute”. And indeed they are. They are sort of like human babies in the sense that they have an oversized head on a tiny body. The look continues with a black cap that extends to just below the eye, black bib and charming white cheeks. Pink-orange blush on their sides completes the look.

Chickadees may readily come to bird feeders, but their visits are short. They will peck at the suet for a few seconds and then they are off to the security of a nearby tree. Soon they are back to grab a seed from the feeder and off they go again, to enjoy the meal elsewhere or to hide it for later. Black-capped chickadees may stash seeds all around the yard and have been shown to remember up to 1000 locations.

One of the most fascinating facts about black-capped chickadees is that every autumn they essentially experience a memory wipe. Some brain neurons containing old information die, and are replaced with new ones ready to store new data. According to Cornell University, “this allows them to adapt to changes in their social flocks and environment even with their tiny brains.”

There is enough individual variation that even experts, which I am certainly not, often resort to geography to determine which species they are looking at. Where the two ranges overlap though, even experts may be stymied as the two species readily hybridize.

Since black-capped chickadees are very social and prefer to fly in flocks, I am hopeful that more will join the two that have found our feeders.