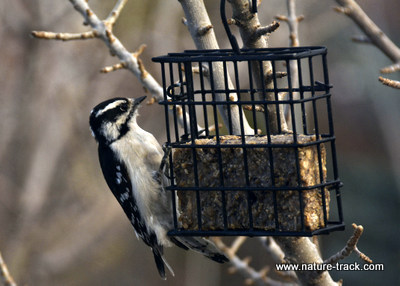 A downy woodpecker prepares to dine on a newly installed homemade suet block.

I picked up five brochures at the Saguaro National Park Visitor Center. Each one was titled, A Recipe for Inviting…(specific wildlife such as hummingbirds and desert finches) to Your Backyard. I like recipes because if followed, they should produce consistent results. I recognized that recipes for desert dwellers won’t likely work for species in Idaho, but I still like recipes for new ideas. This is mainly because the ones I have tried haven’t worked so well.

Since I built my home 15 years ago, I have tried hard to attract wildlife to my yard with mediocre results to say the least. I get the usual house sparrows, house finches, robins, goldfinches, starlings and magpies, but only occasionally get chickadees, woodpeckers, waxwings or hummingbirds.

I have found a recipe though that does seem to be a favorite for all birds that visit my yard, whether they are regulars or special visitors. It is a homemade suet recipe that I have shared on my website in the past. I will repeat it here.

First a little description of what suet is. Suet is rendered animal fat, specifically from around the kidneys. This is actually kind of hard to find in my experience, so I use the word, suet, more generically. Here, a suet block is indeed made from animal fat but rather than beef or mutton, it is lard from a pig.

Unlike true suet, lard is readily available from the grocery store in the baking isle next to the shortening and cooking oil. The value of either suet or lard is to give birds an excellent source of energy during the cold winter months.

I decided to try making my own suet blocks after watching birds pick unenthusiastically at my commercially prepared suet blocks. From what I had read, birds were supposed to really target suet in the winter but my commercial blocks would last for weeks.

When I decided to try making a suet block, I checked a lot of recipes on the internet. Most had as basic ingredients peanut butter and lard. Beyond that, creativity, not biology ruled. Flour, cornmeal, sunflower seeds, oatmeal, bread crumbs and crackers were all suggested. Most suggested adding sugar, and one required honey (clearly they haven’t priced honey lately). Finally, I settled on this one from Birds and Blooms reader Ethel Fleming of Hemphill, Texas as it seemed to have the most thoughtful ingredients.

You will find that this recipe truly is easy to make. I encourage you to do your own test of this homemade suet block against commercially available products. Next week I will chronicle my results and suggested improvements.