Should We Feed Elk Part 2 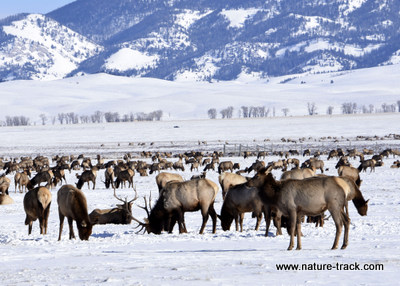 If we feed elk or other big game, it is only a matter of time before diseases like Chronic Wasting Disease threaten them.

Over 10 years ago, Idaho experienced one problem with elk feeding. Brucellosis, a European bovine disease originally transmitted from exotic livestock to native elk and bison, has been eradicated in cattle. However, on elk feeding operations, where elk are concentrated on small areas, there is often a degree of brucellosis infection. It was only a matter of time before the elk returned the favor to livestock and transmitted the disease back.

In 2006, Idaho lost its brucellosis-free status, something that threatened Idaho’s livestock industry. Suddenly, it became important to control brucellosis in wild elk and further limit contact between elk and livestock and elk feedgrounds began to disappear.

Today, Idaho has only one official permanent elk feedground, the Bullwhacker site outside of Ketchum, where 200-400 elk are fed each winter.  Idaho’s official policy though, is to feed big game only when an emergency warrants it. The 2016 Henry Creek Fire created such an emergency at Tex Creek and an elk feeding operation is underway there for this winter.

Disease transmission is not an idle threat or scare tactic. It jeopardizes entire herds and as Idaho found out, can put ranching industries at risk. Brucellosis though, is as much a social issue as a biological one. Not so for Chronic Wasting Disease, aka, CWD. This incurable and highly contagious big game killer has been steadily marching westward, possibly spread with the help of game ranching. Several deer and a moose have tested positive for CWD in the Star Valley area and that is at the front door of many of Wyoming’s feeding operations.

It is no exaggeration to say that the introduction of CWD into feedgrounds could be the beginning of the end of many big game herds, not just elk. From there, it could spread like wind-driven fire into herds not even associated with the winter feeding.

Feeding programs put biologists between a rock and a hard place. Feeding runs the great risk of disease and the other unsavory elements of unnatural concentrations. They can’t put the habitat genie back in the bottle though, so not feeding often means a reduction, sometimes severe, of herds to meet the diminished winter range size—unpopular with hunters and the public at large.

As is so often the case, winter feeding hacks only at the leaves of this tree of evil. The root is the unfettered development of winter range. Anywhere winter range is in prime livestock country, on private property or within oil, gas or mineral hotspots, it is at risk of eventual development or conversion to uses or activities that aren’t compatible with big game winter range. We simply can’t continue to manage elk like it was the 1950’s with 2017 resource availability.

Feeding isn’t the painless solution to lost winter range it was once thought to be. As disease becomes more common and widespread, feeding programs are like playing Russian roulette. It is a game we will eventually lose if we play it long enough.

For wildlife of all kinds to have a future, we must take the long view and that is often a hard political pill to swallow. To have the political discipline to think and plan generations down the road doesn’t generate votes and success is difficult to measure.

As difficult as it may be, the solution to having both wildlife and development isn’t winter feeding, hatcheries or even wildlife refuges. It is significant and thoughtful planning before the first shovel of dirt is ever turned.