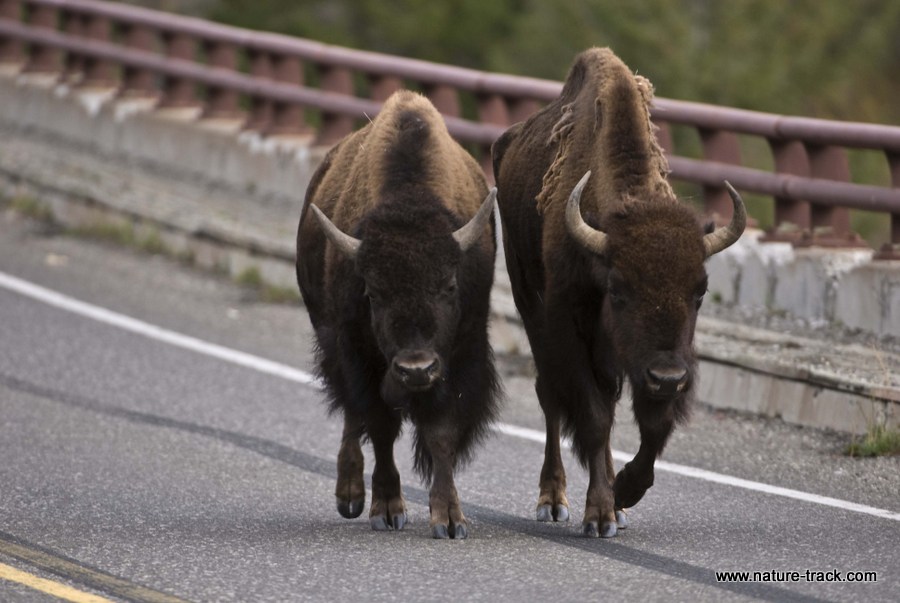 These bison taught a lesson not soon to be forgotten: There comes a time when everyone needs someone to “get their back.” How we stand by friends and family in times of need determines who we really are.

It has been over five years now, but the touching scene is still indelibly stenciled in my memory. We were in Yellowstone National Park, just about to cross the Yellowstone River on our way to Lamar Valley. We stopped because two bison walked side by side squarely in the middle of the bridge and occupying our lane as they walked west.

As we watched, we realized that the larger of the two was extremely emaciated, not much more than a tough hide stretched tautly over angular jutting bones and with a hump that rose like a hatchet blade. Clearly, this animal was not long for this world. In such a weakened condition, he would be an easy mark for even just a few wolves or a grizzly bear.

As they continued to plod toward us, we noticed that the younger animal kept step with its older companion. It was apparent that this wasn’t accidental. It was keeping pace, staying exactly at his side, neither turning left or right nor pulling ahead.

Shortly past the west end of the bridge the old threadbare bison turned south and left the road. His companion immediately followed, quickening his step for a moment to take up his guardian position again.

The two bison slowly trudged down the slope on a well worn trail, crossed the creek and began a lumbering ascent of the far hillside.  At times, the younger bison walked immediately behind his older companion, as if nudging him up the hill. As they crested the ridge, they were once again side by side and, like two cowboys on a last ride, slowly disappeared from view.

We sat there for a time, trying to comprehend what we had just witnessed. Could it be possible that the healthy bison was selflessly protecting its weakened companion? We could discern absolutely no benefit derived by the stronger bison so we could see no other motive. The biologist in me railed against this flagrant anthropomorphism, but I was at a loss as to what else could be going on.

Whether or not I correctly interpreted the story that unfolded on the Yellowstone River Bridge that day, I believed that there was a lesson there not to be ignored.

The young bison couldn’t relieve his companion of his burden; it was his alone to carry. Without opposable thumbs he could not offer sustenance or water. But he could walk along side, proffering support and companionship and serving as his eyes and ears, alert for danger while his companion either passed peacefully or recovered. If the wolves had circled, I had no doubt the healthy young animal was ready to fend them off to protect his weakened brother.

There are times when each of us is like the old emaciated bison. Life beats us down in some way and wolves stand ready to tear and devour us. Faithful friends and companions may be all that stand between us and the full battering of life. And that is worth remembering as we begin a brand new year.