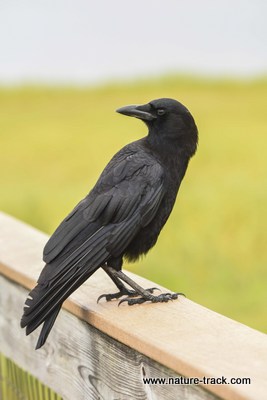 Physical description is only one of the four components of telling whether this is a raven or a crow. Can you tell what it is by the description in the article?

On our flight east last week, we left the range of the common raven about the Colorado/Kansas state line. The raven is an iconic species throughout much of the west, northern Canada, Alaska and the northern Great Lakes. There is also an isolated population centered around the Appalachian Mountains, but most folks dwelling in the eastern half of the country have probably never seen one.

That isn’t the case with its cousin, the American crow. This bird truly is American, distributed across the USA in every state. East coast and Gulf coast birders have the difficult task of learning to distinguish between the fish crow and the American crow, but they never have to wonder whether or not a large black bird is a raven.

Where ravens and crows co-exist, telling them apart can be a challenge. Side by side, the raven dwarfs the crow, but if they are not together, it gets trickier. As with many species, the trick is to look for four things: physical description, voice, habitat and behavior. Armed with this kind of information, distinguishing the two species isn’t much harder than a couple of laps in the kiddie pool.

Physical Differences—The raven is far larger, about the size of a redtail hawk; a crow is just larger than a magpie. A raven’s wings span about 46 inches while the crow’s wingspan is 36 inches. In flight, crows have rounded tails but ravens have tail feathers that are longer in the center, giving the tail a more pointed or diamond shape. When wings are outstretched, ravens have five “feather fingers” and crows have four.

The real distinguishing characteristic though, is the bill. If a crow’s bill can be described as a large pointed chisel, a raven’s bill is a jackhammer.

Voice—Ravens and crows are both vocal birds and that really helps in identifying the two. Crows caw. It is a little high-pitched and nasal but distinct enough that you might think they are actually saying the word, “caw”. Ravens, on the other hand, give a lower, coarser croaking sound. I suppose other ravens find it attractive but it is a bit grating to many human ears. In addition, the crow has a rattle call that sounds like a stick against bicycle spokes. The raven’s alternate call is called a knock and sounds like someone tapping on a wooden door—tok, tok, tok.

Habitat—Crows have adapted to humans and find city life much to their liking. They like trash, city parks and the party life. Ravens prefer less developed areas and open spaces.

Behavior—Crows like company and are often seen in groups. During winter, the groups can be huge. Ravens are a bit more antisocial, usually traveling alone or in pairs. Where crows have adapted well to civilization, ravens are far less trusting and will move off when humans approach.

Ravens also soar much like hawks and on windy days often perform acrobatics such as barrel rolls. Crows rarely soar for more than a few seconds and are not interested in showing off their flying skills.

With these tips, it should be pretty easy to determine whether or not the next large black bird you see is a raven or a crow. Then you can start working on distinguishing the common raven from the Chihuahuan raven and the American crow from the northwestern and fish crows.