Walls on the Border 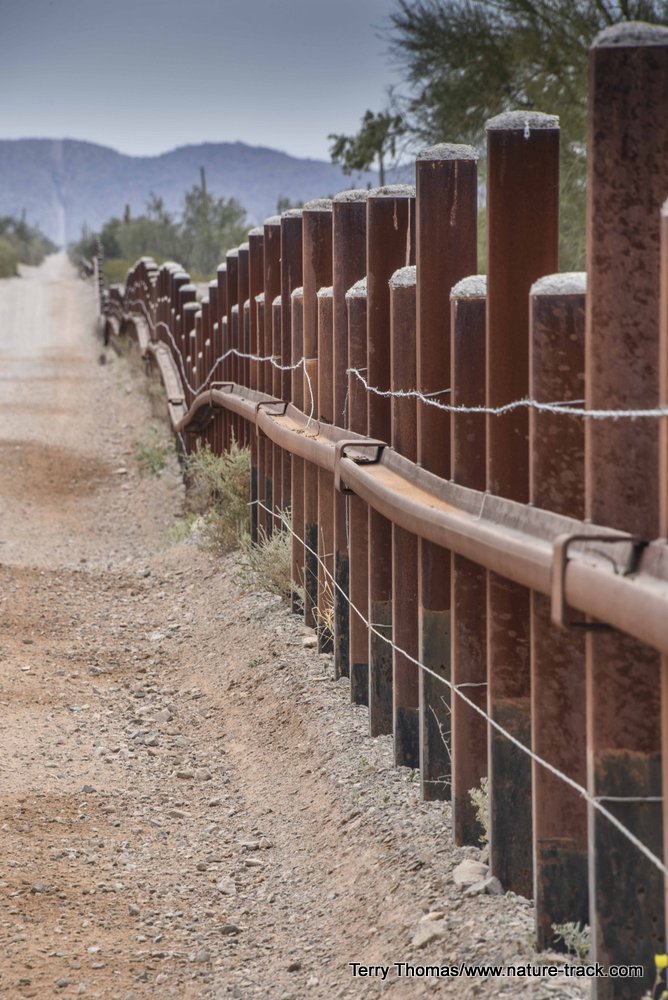 This section of the US/Mexico border parallels Mexico Highway 2 and currently has metal fencing that impedes vehicular incursion but does not slow down someone on foot. It is not much of a barrier to wildlife either.

A few years ago, we climbed a restored segment of the Great Wall of China near Beijing. This incredible fortification, which began as early as 700 B.C., was re-built, added to and repaired up to about 1600 A.D. The main section, built by the Ming Dynasty, the last ones to add to the wall, was over 3,000 miles long. The intent of this architectural marvel was largely defensive, but it also controlled immigration and commerce. Today, with the exception of some renovated segments, the wall is largely in various states of ruin, much of it unrecognizable as stone has been carted away and incorporated into local projects.

Camped at Organ Pipe Cactus National Monument in Arizona last week, we were just a scant five miles from another proposed border wall, this one on the international boundary between Mexico and the United States. One day we drove 15 miles west from Lukeville along the border on the USA side, to get to a wetland in the Monument. For much of the drive, the border was just feet away and we could watch traffic on Mexico Highway 2 which also parallels the border. Twice we were stopped by Customs and Border Patrol agents and park rangers warning us of the potential dangers from drug and human smugglers in the area, warnings that were unnecessary because of the ample signs saying the same thing.

There is much debate about the efficacy of this proposed wall. Will it stop the illegal immigration it is intended to thwart? Illegal immigration has changed in the past decade. Once, immigrants were mostly young males with criminal records. According to a report in the Yuma Sun newspaper, today many of the immigrants are families from Central American countries, not just Mexico, who just want to get across the border where they turn themselves in hoping for political asylum. In the middle of January, a group of more than 300 Guatemalans slipped under an existing border wall and did this very thing. I am proud to live in a country considered by the world as a refuge from evil and corruption, but I am also leery of open borders. It is a true moral dilemma.

There is argument that the up to six-billion-dollar or more cost would be better spent on high-tech surveillance equipment, much more sophisticated than most of us can imagine. Are we relying on 15th century technology to correct a 21st century problem or would this new wall be a superior mix of the two?

Much has also been written about the impacts such a wall, called an impermeable barrier in bio-speak, will have on wildlife and the ecological integrity of this incredibly diverse and fragile area. The proposals for the wall change by the day and it is difficult to pin down exactly what this wall will look like. There are 1,989 miles of border and a solid wall could be incorporated into some or all of it. Regardless, in 2005, the U.S. Congress passed the Real ID Act which allows the Department of Homeland Security to waive any laws, including the Endangered Species Act and the National Environmental Policy Act, if they impede wall construction. This carte blanc approach could spell ecologic disaster, as wildlife and environmental concerns don’t have to be a consideration in the design and construction. Habitat loss, population fragmentation, home ranges divided, migrations curtailed, localized extinctions—wildlife and nature once again required to suffer for the “greater good”.

If this wall comes to fruition, I wonder what it will look like to our posterity 400 years from now. Will it be a strong, standing symbol of our nationality or will it be a ruin like China’s Great Wall? Will our successors consider it to have been worth the cost, not in dollars, but ecologically?