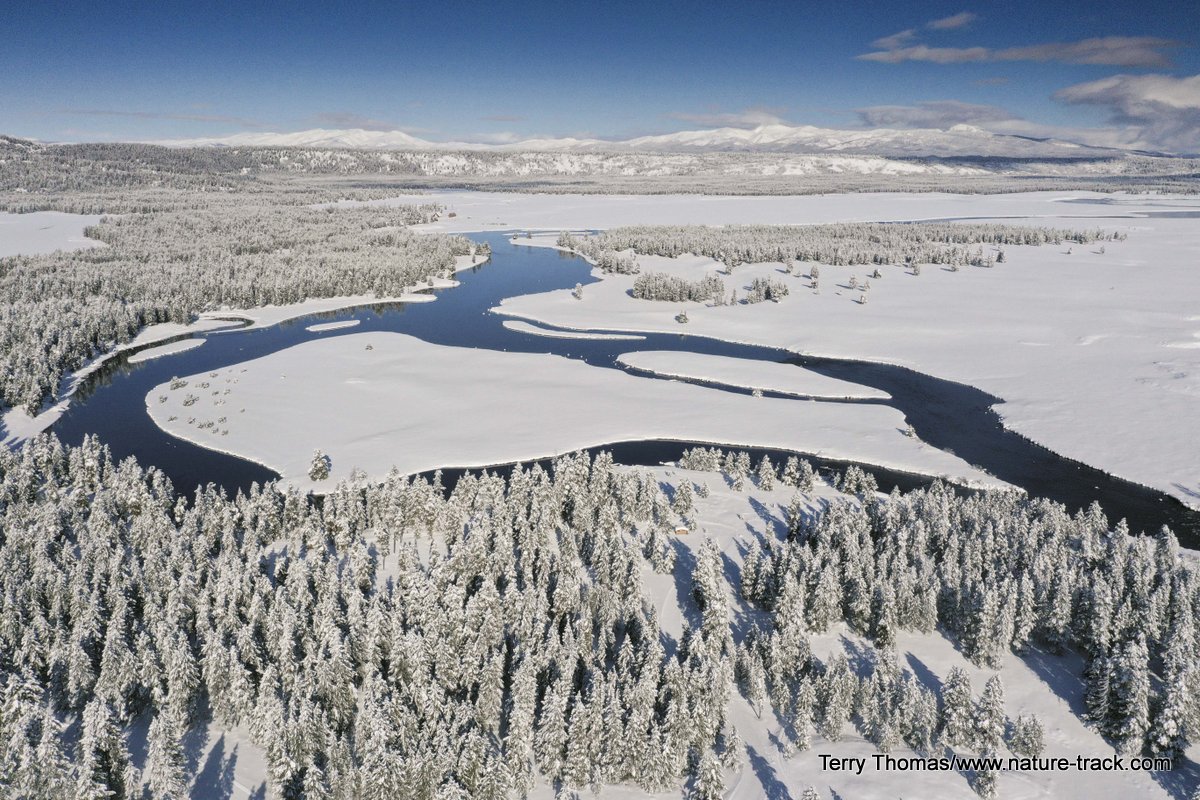 There can be many micro-climates across a broad area like this.

Driving from Island Park to Ennis, Montana early one morning several weeks ago, I began recording the outside temperature as reported by the thermometer on my truck. This may not be the most accurate scientific instrument, but I figured that any errors would be consistent and for my purposes that was acceptable. The temperatures were as follows:  Home (Yale Creek area) +8°F, Yale-Kilgore road (about half a mile and 100 feet lower) -3°F, Elk Creek Station  -9°F, Mack’s Inn +4°F, Henrys Lake Flat varied from -10 to -3°F, turn off to Henrys Lake state park +5°F, Valley View RV Park +1°F, Junction of Highways 20 and 87 +8°F, one mile up Highway 87 +12°F, two miles up Highway 87 +4°F, fish hatchery +6°F and from the turn-off to Frome Park to the state line at Raynold’s Pass the temperature was consistently +1°F. On the Montana side the temperature steadily increased from +1 to +11°F from the pass to the junction with Highway 287 and continued to slowly warm until we hit a balmy +24°F at Ennis.

This morning it was similar as we drove to Mack’s Inn around 0830. Home was 18°F warmer than Elk Creek Station and Mack’s Inn was somewhere in between. We have noticed this same phenomenon, although sometimes even more extreme, going south. That is some incredible variation in just a few miles (it is 18 miles from our door to Valley View RV).

At first, I thought that elevation must be making all the difference. In checking a topographical map, I found that our house is about 100 feet higher than the Yale-Kilgore Road and about 150 feet higher than Elk Creek Station. We are about even with Mack’s Inn and 50 feet lower than Valley View RV. Although we are higher and common sense says that higher places are colder, this isn’t always the case because the coldest air is heavier and falls to the lowest pockets. That is why when last week it was +10 °F at home, but by the time we got to Chester north of St. Anthony, it was -6°F.

Those are some pretty wild temperature swings, but the most interesting part was how much fluctuation there was in between the points that I recorded. Often, within half a mile, the temperature could drop, rise or both as much as ten degrees and change again in the next half mile even along the flats. So, elevation wasn’t the only factor.

These variations may be reflective of microclimates, distinct climates of small-scale areas. Small-scale is a relative term. If you are an insect or a plant, a micro-climate could be measured in inches or feet, for instance the difference between the north side and the south side of a rock. Geographically, a micro-climate could be the side of a mountain or even an area consisting of hundreds or even thousands of square acres.

The unifying concept of a micro-climate is that it is consistently different than the surrounding, or overall, climate of an area and the vegetation may reflect that. We have all been taught that moss grows on the north side of a tree. While that isn’t true, it does point out that one side of the tree may dependably be a much better place for moss to grow than any other side of the tree—a consistent micro-climate.

If you wander around in the woods, you have likely noticed places that are appreciably warmer or colder than surrounding areas. Along a stream bottom or underneath a dense canopy of trees, for instance, the humidity is higher and the solar radiation lower, bringing accompanying cooler temperatures. Extensive removal of this overstory can change the micro-climate and allow different species of plants to thrive.

Thousands of different micro-climates may combine to define the climate of an area. This larger climate may be different than many of the micro-climates that make it up, just as our bodies little resemble the cells that comprise us. More on microclimates next time.