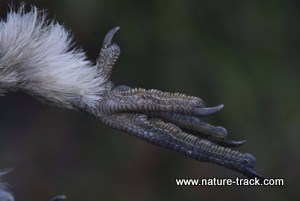 This ruffed grouse foot is well built to withstand cold and to improve floatation over snow.

A friend left a gift for me at work recently: the feet of four different members of the gallinaceous family of birds. There was a ruffed grouse, gray partridge, chukar and ring-necked pheasant.  They were all similar with the classic anisodactyl form—three toes in front and one toe behind (the hallux)—but there was divergence too.

Differences in size were immediately noticeable with the pheasant being the largest and the chukar and gray partridge the smallest.  The chukar foot was also very red, earning the bird the nickname of Mr. Redlegs.

There were other distinctions as well.  The pheasant foot had a sharp conical protrusion, called a spur, about half an inch up from the back toe. This spur, also present on turkeys, can grow to impressive size and is used in fighting for dominance.

Of these four birds, only the ruffed grouse is native. Just from its foot, it was easy to discern that this bird thrives in a habitat far different from that of the non-native species. The foot was feathered all the way down to the toes and the edge of each toe was lined with small papillae that doubled their width and acted like snowshoes. These features are also true of our other native grouse: the blue grouse, sharp-tailed grouse, sage-grouse and spruce grouse. Clearly, these birds are at home in cold snowy country.

Bird feet vary with the different lifestyles of their owners. For water loving birds like ducks, pelicans, gulls and cormorants, the hallux is sometimes reduced or missing and there is a distinct thin membrane forming a webbing between the toes. The webbing may be only between the three main toes or may include the hallux. Webbing may make walking more challenging but dramatically improves the efficiency of their feet when swimming and diving.

Living between open water and land often presents its own set of problems so shorebird feet are adapted differently. Swimming is less important for them as they forage in shallow water or on mudflats. Having a foot that doesn’t sink in the mud is important though and many have just enough webbing to keep them on top of the mud.

The American coot has found a different compromise: its long toes are lobed, but not connected. Other members of the rail family often have extra long slender toes to support them as they walk on top of lily pads and other vegetation.

Raptors, including owls, hawks, ospreys and eagles all use their feet to grasp prey and have the classic anisodactyl formula. However, their strong toes are modified with long talons that pierce and kill their prey.

The second most common foot form is called zygodactyl. This is the form many species that cling to bark use and sports two toes forward and two toes back. This is the foot pattern of woodpeckers and roadrunners.

As I added these specimens to my growing nature collection, I looked at my own size twelves and realized just how boring we humans can be.