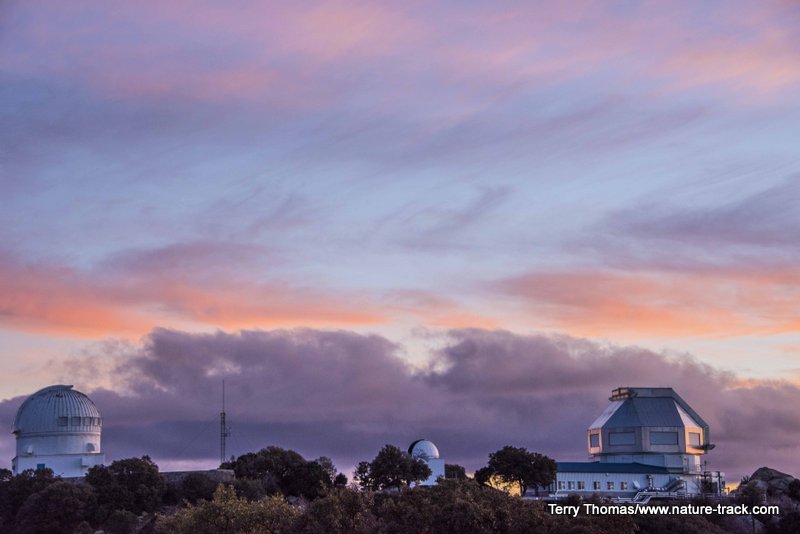 Kitt Peak National Observatory is about 40 miles west of Tucson, AZ in an area once known for its dark skies.

Fifteen people sat in a semi-circle in what appeared to be the top end of a silo. A moving rectangle of night sky could be seen through the roof as it rotated noisily above us.  Despite being less than 100 miles from Mexico, the night air was surprisingly cold and the breeze that rushed through the slot didn’t help.

Fixed to the floor in the center of the space was a 20-inch telescope, and our guide, Brian, manipulated its position to track the roof slot. With a few computer clicks, he lined up the telescope with a distant star and in turn we each took a look.

We were part of a night sky tour on Kitt Peak west of Tucson, Arizona on the Tohono O’odham Reservation. Constructed in the late 1950’s, Kitt Peak National Observatory was at one time the top observatory in the world. Today, it no longer supports the world’s largest telescopes but still has the largest collection (25) of optical scopes on the planet as well as two radio telescopes. This includes a 500-foot-long telescope designed to observe the sun. New technology that cuts through atmospheric distortion helps these older telescopes keep up with the competition by improving resolution. It is still a busy place for astronomy research.

Kitt Peak Observatory is part of the National Optical Astronomy Observatory whose other member observatory is, oddly, in South America. Their mission, “is to enable discovery in ground-based optical and infrared (OIR) astronomy and astrophysics.”

There are a lot of astronomy observatories in the world. However, they can’t just be built anywhere. When trying to see objects that are many light-years away, clarity is paramount. Observatories need the darkest skies possible, a high proportion of cloudless nights, and clean and dry air to minimize distortion. For that reason, observatories tend to be on mountain tops and far from civilization. That is why South America’s Chile, and specifically the Atacamba Desert, have half of the world’s largest optical telescopes.

So, if Kitt Peak Observatory’s 26-foot diameter telescope isn’t the biggest, what is? That title probably rests with the Gran Telescopio Canarias based in Spain’s Canary Islands. It has a 34-foot mirror. It is closely followed though by the Keck 1 and Keck 2 telescopes located Mauna Kea Observatory in Hawaii. These 25-year-old telescopes have 32.8-foot mirrors. A 96-foot diameter scope is under construction that will dwarf all others.

Not all observatories allow the public to visit. However, Southern Idaho is fortunate to have a 24-inch telescope available in the Centennial Observatory at the College of Southern Idaho in Twin Falls. One of the main purposes for this telescope is public education and there are a number of programs for stargazing. And unlike our Kitt Peak tour which had a real financial bite, these programs are free or next to it. Find out more by visiting their website at: https://herrett.csi.edu/astronomy/observatory/index.asp.

In 1543, Copernicus proved that the Earth rotates around the sun and not vice versa. He was confident of his calculations but was afraid to publish his work because it defied the best thinking at the time. Since then, the science of astronomy has continued to advance and to challenge our beliefs and expand our minds. For instance, over 3,000 exoplanets, planets in other star systems, have been discovered. It is now thought that the Milky Way alone could hold up to 11 billion Earth-like planets that orbit within the habitable distance from their star. Astronomical observatories play a key role in gathering in the knowledge that rocks and blesses our world.