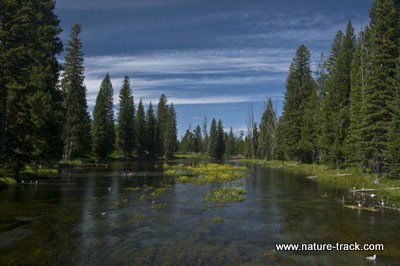 Big Springs is a seven acre National Natural Landmark in Fremont County that, "is the only first-magnitude spring in the country that issues forth from rhyolitic lava flows."

I love calendars. Not the kind with cars or even beautiful women, but rather calendars that display the wonders of nature. Animals or scenics, it doesn’t matter, and I have been known to save calendars for years just because I loved the photos.

According to the National Park Service, this program is intended to, “recognize and encourage the conservation of sites that contain outstanding biological and geological features composing the nation’s natural landscape, regardless of landownership type.”

This program isn’t a haphazard hodgepodge of randomly selected landscapes nor is it just a collection of pretty places. Each Landmark is selected because it is a quality representative of a major or unique biotic community or geologic feature.

Although the program is administered by the National Park Service, National Natural Landmarks may be owned by any number of entities, including private landowners. The designation doesn’t necessarily change land use and participation is voluntary.

It should be noted that designation as a National Natural Landmark offers no official protection to the area. It doesn’t change ownership or necessarily management. It is solely recognition of an area’s, “outstanding condition, illustrative value, rarity, diversity, and value to science and education.”

I have been to seven of the eleven National Natural Landmarks in Idaho and I can attest that each one is well deserving of its status as a special place.

I have two National Natural Landmark calendars on my wall. One displays the current month and the other the upcoming month. I applaud my cleverness, but really it is just a chance to admire the images longer. And it helps me realize that I now have almost 600 new sites to include in my travel plans.