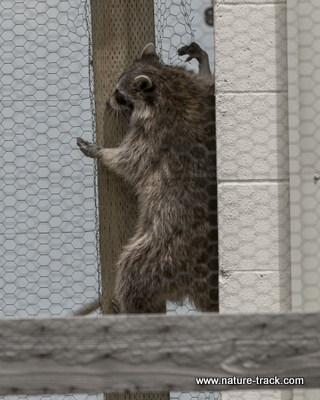 Raccoons are skilled climbers, curious and yes, meddlesome. They are fortunate to also be charismatic and cute and that sometimes buys them a little tolerance.

I was saddened to see that the unmoving lump in the middle of the road was a raccoon, all its charm snuffed out under a car tire. Later inspection proved it to be a male, possibly drawn to its unfortunate demise while searching out a female to mate with.

February is mating season for a number of mammals—coyotes, wolves and raccoons among them. That may increase our opportunities to see the largely nocturnal raccoon, but it also means they may get whacked on the road more often.

Raccoons are one of the most abundant and widely distributed mammals in North America. It wasn’t likely always that way. Raccoons are one wildlife species that has adapted well to human settlement. Scientists believe that in pre-Columbian times, raccoons were limited to the woodlands and waterways of the southeastern United States. As settlement moved inexorably westward, so did the raccoon, finally reaching the west coast and about halfway up the Canadian provinces and south to Mexico and Central America.

Raccoons are omnivores, eating anything from fruit to nuts and everything in between. As members of the Order Carnivora, meat is always on the menu as well. With such broad food habits, it is no wonder they thrive around humans. Research has shown that raccoon populations in urban and suburban areas actually do better than their rural counterparts. Raccoons and humans are in closer contact than we might imagine and gardens, attics, garages, pet food and trashcans are all tantalizing one-stop shopping for raccoons, usually to the irritation of their human benefactors.

Raccoons are charismatic and that sometimes buys them a bit of tolerance. Their iconic and beguiling Zorro-like black mask, so useful in reducing glare, creates a mischievous, “who, me?” look. Their waddling walk, a fact of life when back legs are longer than front legs, is charming and their ability to stand up on two legs is almost childlike. Then there are their front paws. These dexterous little feet are extremely sensitive—about one third of a raccoon’s brain is dedicated to tactile sensation—but the way they can handle objects reminds us of hands. There is a lot to love there.

A raccoon’s cleverness helps create a love-hate relationship. Testing indicates that they are nearly as intelligent as Rhesus monkeys. They are able to solve complex problems, remember solutions for up to three years and at least one study determined that they can tell the difference between two, three and four objects—i.e., they can count. Animals this smart can not only solve problems but can create them, sometimes outsmarting humans.

The persistent myth that raccoons wash or dampen their food will probably live as long as the species does. While raccoons do manipulate food in the water, this is usually items that they catch in the water. A gritty field worm will get eaten just as fast as a washed one. The “washing” does soften the surface of the paws and increases tactile sensitivity. As for needing to dampen food because of lack of saliva glands, that too has been proven false.

I was first introduced to the charismatic raccoon as a boy when I read the heartwarming novel by Sterling North entitled, Rascal. Although the theme of the book is of transcending loss in life, I remember the connection between boy and raccoon, North called a “ring-tailed wonder".  The clever, mischievous, endearing raccoon have held a special place with me since then.