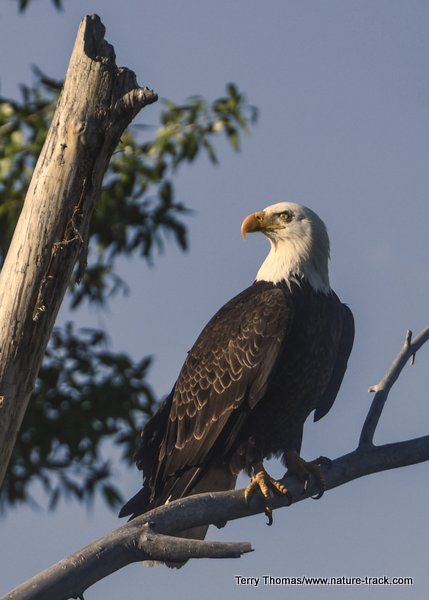 Bald eagles are permanent residents in eastern Idaho but during winter months, they are joined by migrants from the north.

The bald eagle is possibly the most easily recognized wildlife species in the United States. Not only is it our national emblem, a mature bald eagle is unique among the other birds in this country. With their snow-white heads and tails, huge size (up to 14 pounds with a seven-foot wingspan) and propensity to perch on conspicuous branches they are easy to spot and recognize.

Bald eagle numbers actually increase during the winter months in eastern Idaho. In addition to the resident eagles that live year-round along the Henrys Fork and South Fork of the Snake River, huge migrations of eagles leave Alaska and Canada as northern lakes begin to freeze over.

Fall migration is a leisurely affair. They will work their way south, entering Idaho first near Coeur d’ Alene to take advantage of spawned out kokanee salmon in Lake Pend Oreille and Coeur d’ Alene Lake. From there, some head to Oregon and California and others set wing for southern Idaho and Utah.

Bald eagles, once plentiful, dwindled to alarmingly low numbers by 1940 when Congress passed the Bald Eagle Protective Act, largely because they were killed for being a perceived threat to livestock and the salmon industry. The introduction of the insecticide, DDT, though, nearly drove them to extinction. By 1963, only 417 nesting pairs were found in the lower 48 states. They were listed as “endangered” by the Endangered Species Act in 1967.

Recovery efforts, including the ban of DDT in 1972, produced amazing results and the bald eagle became the poster child for the success of the Endangered Species Act. By 1995, its status changed to “threatened” and just 12 years later, with over 10,000 breeding pairs, they were removed from ESA protection altogether.

We may take our bald eagles for granted as most of Idaho has permanent resident eagles as well as the migrants. That isn’t the case across much of the Lower 48. In most of the country, bald eagles are a winter treat, disappearing back into the north country by breeding time.

Solitary bald eagles can be found by driving along the South Fork or the Henrys Fork and scanning the bare cottonwoods along the rivers. However, if you want to have the chance to see lots of eagles, Camas National Wildlife Refuge north of Hamer is the place to be. Each winter evening, from 20 to over 100 bald eagles gather in the cottonwood trees north of the headquarters building where they roost for the night. By early morning, they are off for the day, possibly traveling to the Henrys Fork to fish and hunt waterfowl, their favorite foods.

If you want to make an outing of your eagle adventure, join the Friends of Camas this Saturday, February 24, for their annual Come to Roost activity. You can join other eagle enthusiasts in watching the eagles fly in for the evening. This is an open year and the birds are more scattered across the landscape, but there may still be from 20-40 birds coming in. As a bonus, the Friends group will be supplying free hot chocolate. The affair begins at 4 p.m. and lasts until dark.

Regardless of where we see bald eagles, they should always remind us of what we nearly lost and more importantly, that we chose to save them.