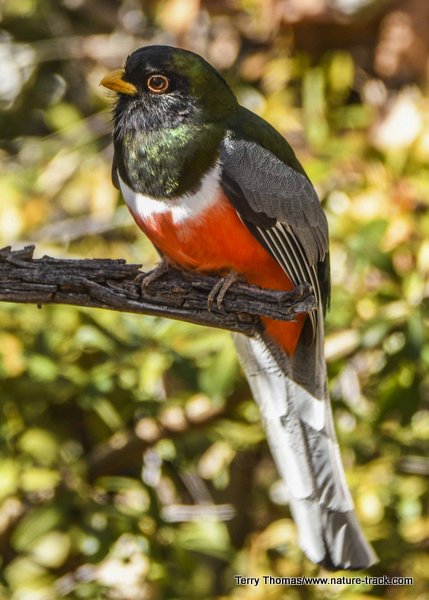 While chasing a profession of photography, I have photographed 250 species of birds including the beautiful elegant trogon. That alone has made the pursuit worthwhile.

A long winter’s project has been to reorganize my digital image files on the computer, adding descriptions and key words and finally consolidating files that have been heretofore stored by year then subject into massive subject only files. As I have sat at my desk night after night sorting image files, I was struck with a certain melancholy called discouragement. When I retired, I had the ambition to make a new career out of photography, a passion for almost 40 years. Despite five years of effort, this hasn’t happened.

As I am still just starting this massive task (about 90,000 images so far), I have been asking myself about the point of it all. It is a huge investment in time for something that isn’t yielding much of a financial benefit.

My wife has often questioned my desire to make money with photography. Why couldn’t I just enjoy it as a hobby? Camera equipment (and back in the day, film and developing) is expensive and I guess I needed a reason greater than a pastime to spend scarce family resources. It only made sense to me that the equipment had to pay for itself and for excursions and more.

Whether this lack of success is reflective of my skills as a photographer, businessman, naturalist, not having a mentor or all of the above, I don’t know. I suspect patience, or the lack thereof, plays a role somewhere. I also recognized long ago that a passion for photography and hard work doesn’t replace native talent—my possession of which is meager at best.

But as I look at each file, even though there may be north of half a million of them, I can almost always remember the day, the situation and often the emotion involved in the creation of that image. The images are like a visual journal in my mind. I could tell a story about almost each one of them. I have been surprised that a memory that can’t remember which day of the week it is half the time, can remember EXACTLY where I was standing and what the light was like for that image.

As I sorted images last night, I wondered how many times the camera and the hope of a winning photograph had taken me to places I would have never gone. For instance, we have been to Florida four times, never once visiting places like Disney World or the world-famous swim beaches. We have opted instead for places like the Everglades, Big Cypress Swamp and Ding Darling National Wildlife Refuge. Without the camera and the intent to sell photographs, would I have justified these trips some other way or would I have stayed home and worked in the garden? Would I bother to get up for a sunrise or stay out late on a chance for a colorful sunset if not for photography?

Seeing nature through the lens of my camera has made me a much better naturalist. I am far from a perfectionist, usually leaving details to others. But with the camera to my eye, I was forced to look at details to ensure a competent composition. I had to learn new skills constantly just to stay reasonably behind the competition. Thus, I have gotten to see what the world looks like from above (drone), in time-lapse and long exposure—all ways we don’t normally see the world.

Sometimes the pursuit of the goal and not necessarily reaching it, is the real purpose. I would love to make more money with my very expensive equipment, but if I don’t, there are still excellent reasons for the pursuit.