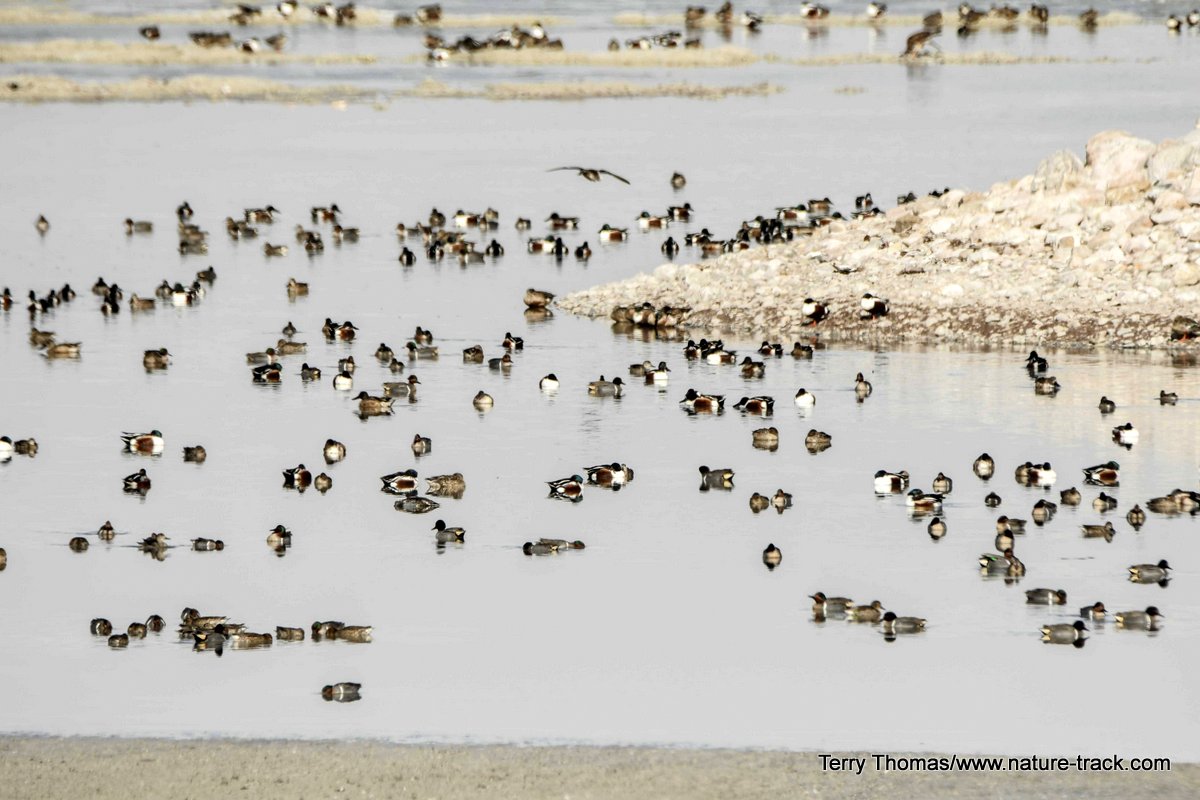 These Northern shovelers and green-winged teal are wintering at the Great Salt Lake. They will soon be joined by millions of other birds.

There are numerous features on our landscapes that we take for granted will always be there, at least within ours and our great-grandchildren’s life times. Imagine a world without the Grand Teton or the South Fork of the Snake River. How about the iconic Southern Butte or the Menan Buttes or the Lost River Range? These places define our world.

Of late, Utah politicians are coming to the conclusion that the Great Salt Lake, another icon impossible to imagine not there, may be dying. It is now at a 170-year low and continuing to decline in the face of a mega-drought affecting much of the West. Utah legislators have approved spending $46 million dollars on projects intent on restoring lake levels (precisely the opposite of the millions spent to get rid of water in 1983 after an overabundance of spring melt sent lake waters crashing over dikes and freeways). Experts consider these actions too little, too late.

Certainly the lake, the last meaningful puddle left behind from Lake Bonneville, has seen drought before. This time though, humans have had a hand, taking most of the water intended to maintain lake levels and using it for agriculture (65% of the water in the GSL drainage is allocated to farming) and for a burgeoning human population and their insatiable need for water for drinking, cleaning, watering lawns and golf courses.

To those new to the area, there might be a big, “so what?” lingering in the back of their minds. A big salty lake goes dry, who cares? Well, those who make their livelihoods extracting minerals, salt and brine shrimp, with a combined annual impact on local economies of $1.3 billion dollars, likely care.

Even more far reaching though, with tentacles extending into much of the continent, is the impact to wildlife, especially migrating birds. Great Salt Lake and its surrounding habitats support 330 bird species. That is impressive enough. However, the incredible variety of species is exceeded by the sheer volume of birds that are dependent on the lake during migration. Here are some figures from the Utah Division of Wildlife Resources: half the world population of eared grebes, five million of them, count on the Great Salt Lake as a major stopover during migration. Six hundred thousand Wilson’s phalaropes, more than a third of the world population, depend on the lake as the largest single staging area on Earth. Snowy plovers, 21 percent of the continent’s population, funnel through Great Salt Lake and take advantage of the abundant food there. Millions of ducks of many species also utilize the Great Salt Lake. And that is just a smattering of the 330 species.

Some will argue that birds have wings and can just shift locations. Shift to where? We haven’t left them much room in a system where resources are stringently (over) allocated and flexibility is a dirty word. There isn’t much habitat that isn’t already being used, certainly not enough to absorb millions of extra mouths to feed.

The Great Salt Lake may not go dry, but the changes that are occurring may not be reversible. There are two invertebrates that live in vast numbers in the lake. Brine shrimp biomass equals that of all the people living along the Wasatch Front and brine flies are equally numerous in season. As the water levels drop, total habitat area declines as well. A drop of a single foot in the lake level can dry out thousands of acres. In addition, what is left becomes even saltier, further reducing habitat for these two species that all others depend upon, and changing the lake chemistry and productivity forever.

Last week we drove by Sevier Lake in west-central Utah. It’s plantless vast dry lake bed, symbolized by a white body with dashed blue lines through it on the Utah road map, was stark and depressing. It is unimaginable that future maps may depict the Great Salt Lake in this same way—dry, desolate and lifeless—after serving wildlife for millennia, but we are at its doorstep and we may not be willing or able to do anything to stop it.