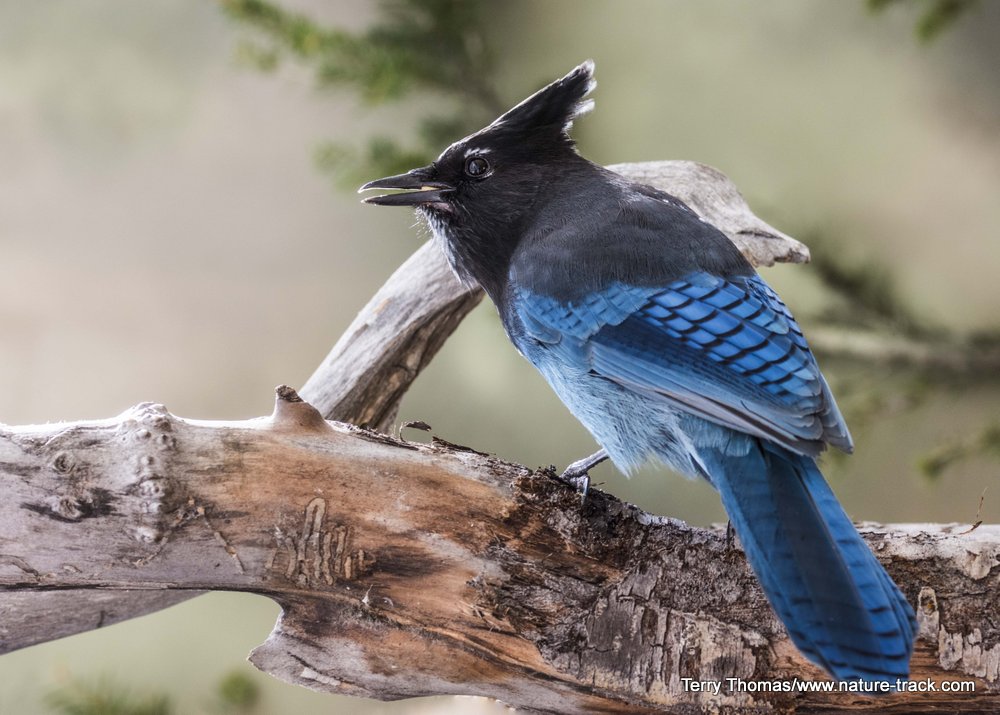 A Steller’s jay is a beautiful bird all year-round, but adds special color to the monochromes of winter.

Sitting in my blind at 20 degrees F is seldom easy. However, the bird action around my feeder was intense and I was kept busy enough photographing them that I didn’t notice the cold much. All of these were species I had rarely if ever seen at my feeders when we lived in the valley so it was exciting.

I heard what sounded like a red-tailed hawk call and wondered if the bird activity had finally attracted an opportunistic predator. After I had heard the call several times more and the birds around the feeder didn’t seem to react, I chanced a look out the side window of the blind. Instead of a hawk, to my surprise, I saw a Steller’s jay, a beautiful blue and black member of the corvid family and close relative of the blue jay. This was perplexing so I turned to my Audubon app and checked out the Steller’s jay. Sure enough, one of their calls was listed as a hawk imitation.

As it turns out, Steller’s jays have a lot of calls for communicating with other Steller’s Jays. However, they also mimic many forest sounds including squirrels, flickers, goshawks, nuthatches and even human-created sounds such as water sprinklers.

According to Cornell’s All About Birds website, Steller’s jay is probably one of the most frequently mis-spelled bird names. I even looked up the spelling and got it wrong at first. It does not have an “a” in the name. Steller’s jays were officially named in 1788 after Georg Steller, who was a naturalist aboard a Russian ship in 1741 where he was the first to describe a Steller’s jay he found on an Alaskan island. Steller’s sea-lion and Steller’s sea-eagle were also named after him.

Almost everyone who has visited us this winter has declared the Steller’s jay to be one of the most handsome of birds. Sexes are similar and in our neck of the woods; both have black heads, necks and backs. The body is a medium blue and the wings are blue with black barring, similar to a blue jay. There may be a white eyebrow and rakish somewhat indistinct white striping on the forehead and chin. Their most distinctive feature is a crest on the head, a feature shared with only one other jay, the blue jay. These two closely related species actually even interbreed where ranges intersect.

What is most interesting about their looks is how variable they can be. Some populations don’t have the black head and neck, but rather are blue throughout. Not all have white on the head either. Disparate looking populations may be side by side.

Despite their beauty, Steller’s jays, like most members of the Corvidae family, have a very dark side. They are common nest robbers, stealing and eating eggs and hatchlings. It that were not enough, they also occasionally attack and kill smaller birds. I haven’t seen any aggressive behavior at my bird feeders so maybe I am keeping them in a good mood with peanut butter. I know it always works with me.

You will find Steller’s jays in coniferous forests from southeastern Alaska to Central America. They are food generalists, eating insects, seeds, berries, nuts, and the aforementioned eggs and chicks. They are very social and vocal, keeping up a constant dialog with each other about forest events.

It has been worth braving some cold mornings to be able to watch Steller’s jays up close. I hope they stay around for the summer as well.