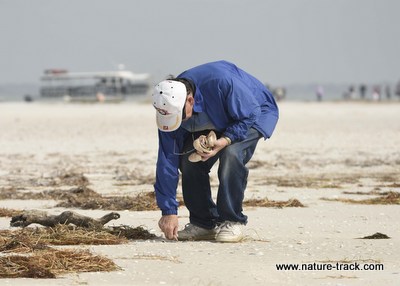 A tourist collects some of the abundant sea shells on a south Florida beach.

Last week, my wife and I walked the beach of Honeymoon Island near Tarpon Springs, Florida. The tide had withdrawn, exposing 50 feet of wet sand and exposing a world of sea shells. Most were bivalves, clam-like shells that hinge at the back. There were other invertebrates too, though, some with unusual names including  conches, worm shells, olive shells, pen fans, cockles, augers and cones. Other forms of beached invertebrate life included sponges, corals and starfish.

Equal to the variety was the stunning abundance of the shells and other sea detritus. Smaller shells were piled in thick windrows where wave action had thrown them. Shells crunched underfoot making shoeless walking a serious hazard. Larger specimens speckled the beach despite the fact that beachcombers had already picked up many of the best samples. The shells were so abundant that the town of Tarpon Springs uses sea shells instead of gravel on their walking trails.

Invertebrate is a catchall term that separates animals with backbones, vertebrates, from animals without backbones, invertebrates. Conceptually, this division is useful as it is easily understood. I recently taught a group of 11-year-olds about invertebrates and they could readily identify a wide variety of species.

As a tool for the taxonomist though, classification as an invertebrate is next to useless. This is a huge group of animals that have little more in common other than what they lack—a backbone, and by consequence, any bones at all. Imagine trying to compare a grasshopper to a clam or a nematode to a giant squid. They may have no more shared attributes than a seahorse and a real horse. Classifying an animal as invertebrate does little to advance our knowledge about the species involved or where it fits in the world.

Part of the reason the term “invertebrate” has little value for classification is the incredible diversity of invertebrate life. What we saw on the Florida beaches is just a small part of this widely divergent “group”. Numbers fluctuate a little on the total of animal species on this planet, but one source suggested that of the 1,305,000 known animal species, there are about 66,000 living vertebrate species. That means that invertebrates, in all their classifications, make up over 95 percent of the animal species on the planet. With so many species, it is understandable that invertebrates assume multiple critical roles in the function of maintaining life on this planet.

Within this group known as invertebrates are species that require a powerful microscope to see and another, the colossal squid, that may weigh nearly a ton and stretch to 40 feet long. Its’ eyeball alone is a foot in diameter.  Invertebrates hold claim to the longest lifespan—a quahog clam was found to be 507 years old and the life of a sponge may be millennia, even approaching biological immortality.

More inland, at Myakka River, we watched a limpkin, a great blue heron-sized bird that preys specifically on clams and snails, deftly open and eat several clams. Like this limpkin, we realized that all vertebrate species, the rulers of this planet, depend upon invertebrates to keep the biological gears turning. They can certainly live without us, but we cannot live without them.