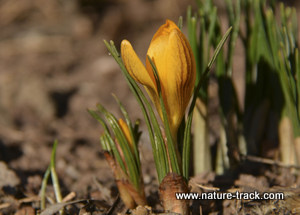 Crocuses blooming in February? Temperatures in the 50s for several weeks straight? What does it all mean?

On Washington’s birthday, we had crocuses blooming in the yard and tulips six inches tall while the bird bath, despite a heating unit, was nearly frozen solid. Back east, Boston is playing with seven feet of snow and our grandkids in Tennessee have had five snow days off in a row from school.

February is predicted to be the warmest ever recorded in eastern Idaho with a string of 50+ degree days that felt more like April than February. I thrust a shovel into my garden and it sank up to my foot. The frost from a Thanksgiving cold snap seems to have completely given way to the unseasonably warm February.

The weather is a little nutty right now and that leads to a question of what the impacts might be. Will we pay later for the holiday from the cold we experienced in February? The answer is a definite maybe.

The warm temperatures and slight snow cover have certainly been a boon to wintering big game. For at least the third year in a row, winter conditions have been favorable and this winter may have been the best yet. Fawns and calves that might have been culled by more normal winter weather will survive to pass on their genes.

However, there is a flip side to this. If the remainder of the year is just as dry as what we are currently experiencing in the valley, forage production on summer range could suffer. Mothers giving birth to calves and fawns this spring may find it difficult to obtain enough quality groceries to produce the milk their offspring will need to thrive. Mothers may enter next winter without the security blanket of extra fat and their babies may be undernourished. Even a normal winter following a dry summer can see higher than normal mortality.

Reservoirs are much more dependent on snowpack high in the drainages than on rainfall or snow in lower elevations.  With all the warm weather and blue sky days, it might be surprising to realize that the Snake River drainage above Palisades is actually above the norm for this time of year. Henrys Fork is about normal, but the Big Lost, Willow Creek and Camas Creek are all substantially less than normal. Wetland habitats in these drainages may suffer this year.

The biggest impact of the unseasonable warm spell may be on vegetation. As with the crocuses in my yard, other plants may be duped into thinking it is okay to exit dormancy and begin springtime activity. A return of cold weather may kill them. A few years ago, unseasonably warm days in early March were followed by a week of nights in the low 20s. The west half of my two 10 year old apricots were fooled into waking up and then were killed by the low temperatures. Other vegetation could be similarly damaged from awakening too soon.

All said and done though, we may never know the real impacts, if any, of the warmest February on record. What do you think?