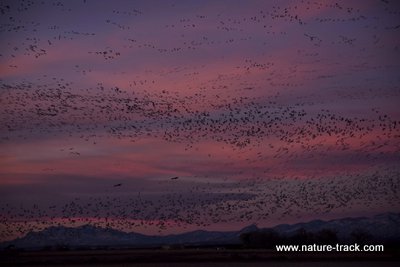 Snow geese and cranes circle in wild profusion above Bernardo Wildlife Management Area, New Mexico. You can see a three minute video of this awesome experience on my youtube channel at:  https://www.youtube.com/watch?v=1xMJkkzpwe0

Morning light was still mostly a dream but the air was already alive with sound when we pulled up to Bernardo Wildlife Management Area about 30 miles north of Socorro, New Mexico. Snow goose chatter mixed with the strident cries of greater sandhill cranes and as the sky transformed from gray to pink to orange, the clamor rose to a fever. Huge flocks of brilliant white geese tinged orange by the rising sun and long-legged gray cranes began to rise off the marshes in a roar of wings as they chased their calls into the sky.

They circled in a living dervish above. A group of about 10,000 geese landed in a field not 100 yards away. They mingled and called and there was a steady influx of newcomers as well as those that didn’t find the field to their liking and took to the sky again. A few thousand cranes stood nearby, but as if by decree, there was little mixing of the two species.

About sunset, the same scenario played out in reverse. This time, from a blind on shore, we watched cranes return to a roosting pond. The air boomed with their incessant calls and cranes flew overhead from every direction. Thousands of blackbirds performed an acrobatic sideshow, pulsing, twisting and morphing like a single organism as they decided on their evening’s roost and waves of snow geese winged in from every compass point.

I was reminded of another occasion while counting elk from a helicopter on Tex Creek WMA east of Idaho Falls. We flew over a ridge to find 1700 elk in the small valley below. When they moved en masse beneath us, it was like a live magic carpet flowing over the terrain. It is still one of the most awe-inspiring wildlife moments I have experienced.

As a photographer, I love getting up close to individual animals and capturing intimate portraits and personalities. As a naturalist though, nothing moves me more than being among massed wildlife. I don’t really care if it is fish, elk, birds or even insects, there is a power and an assurance there that life truly does find a way.

Many animals naturally congregate, especially during migration and the winter season. Sometimes shrinking habitat encourages them to funnel into areas set aside specifically for wildlife and artificially increases group size. The National Elk Refuge in Jackson is an example.

Huge concentrated groups bring their own set of problems like increased risk of disease transmission and stress. But as habitat continues to decline, “hyper habitats” will, of necessity, become more common and congregated wildlife will increasingly be the norm.

But there are advantages to vast groups too. The risk of being the victim selected by a predator decreases as numbers increase. Predators actually seem confused by the superabundance of prey as well.

You can find huge wildlife displays near Idaho Falls. In winter, go to Deer Parks WMU west of the Menan Buttes to see up to 2,000 swans or the National Elk Refuge at Jackson, Wyoming for thousands of elk. Check out Market Lake/Camas NWR/Mud Lake for snow geese as soon as the ice thaws in March.

My personal bucket list includes the lesser sandhill cranes at the Platte River, Nebraska, the wildebeest migration in Africa and the amazing plenty of summer in the Arctic.

Having spent a career as a wildlife biologist and witnessing firsthand the many threats to wildlife and wildlife habitat, I suppose that seeing teeming wildlife is like an antidote. We will never return to the days when millions of bison covered our prairies, but a huge pulse of life breathes hope that all is not lost.