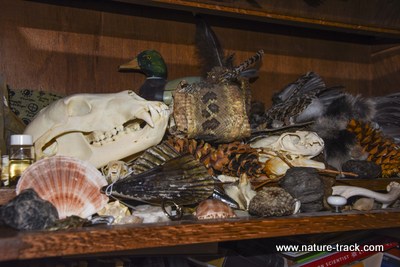 My cabinet of curiosity is unorganized, but as a reminder of nature’s diversity and beauty, it is just fine.

I returned from a recent trip to Florida with a bucket full of curiosities, mostly collected from the ocean, things mostly strange to Idaho. My eclectic assemblage included a variety of seashells, a few bits of coral, a piece of sponge and several apple snail shells. To my chagrin, three horseshoe crab exoskeletons, abandoned when their owners shed them for larger suits, didn’t survive two weeks of getting shoved around by luggage.

All of my new treasures are destined for already bulging shelves stacked haphazardly and somewhat hazardously, with a dusty collection that includes bark, seeds, bones, skulls, rocks, shells, feathers, eagtags, leg bands, a tiny elk fetus preserved in alcohol, and owl pellets, to name just some of the items. All meaningless bio-junk to anyone else, it is a priceless natural collection to me.

My collection follows a long line of much more impressive collections that began in the seventeenth century as entertainment for gentlemen explorers. From overseas trading and exploration voyages, they brought home strange and interesting objects of natural history, geology, archaeology, history and culture to share with those at home.

As the hobby grew, practitioners began to display their booty in cabinets especially designed for them. They became known as Kunstkammer, Wunderkammer, cabinets of wonder or cabinets of curiosity.

The importance of these collections may be lost today when technological advances allow few corners of this planet the courtesy of untrammeled anonymity. Modern discoveries of necessity must dive ever deeper into the inner workings of molecular, atomic and subatomic scale.

In sixteenth, seventeenth and even eighteenth centuries though, much of the world was yet to be explored by Europeans. Everywhere explorers and traders traveled they encountered the new and the strange.  Virtually every expedition returned with dozens to hundreds of new specimens, each carefully recorded.

For instance, Sir Hans Sloane, an English physician and later the founder of the British Museum in London, was ship’s physician for a voyage to Jamaica. He returned to England in 1689 after having gathered a wide variety of specimens including over 800 species of plants which he categorized and added to his own collection.

This was the era of cataloging. Just determining what the world truly contained occupied much of the time of scientists. Private collections proved invaluable to the scientific cause.

As collections expanded to rooms and later occupied entire buildings, they became the precursors to a number of modern museums. Some were large enough to charge admission and people swarmed to see the curiosities from distant lands.

With the introduction of commerce, charlatans also flourished, creating houses of wonder based on the macabre and often perpetrated outright fraud. Two-headed monkeys, human skulls with horns, narwhal tusks presented as unicorn horns and just about every other fantasy known at the time could be seen in the less reputable establishments.

We may scoff at the gullibility of that bygone era, but we need to remember that they were seeing, for the first time, many truly strange and wonderful specimens. The occasional deception wasn’t hard to swallow, especially when they couldn’t just turn to Google for corroboration.

I don’t really try to categorize my own cabinet of curiosities. It is truly a hodgepodge, and I don’t have to concern myself with advancing science. I can focus instead on form and beauty and curiosity and let the items there remind me of the amazing world we live in and our responsibility to care for it.