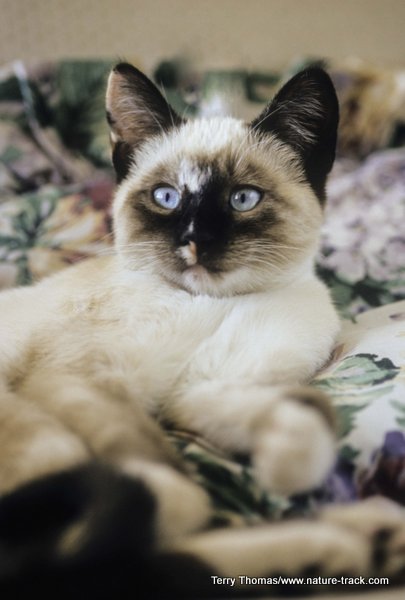 Cats are fine animals and make great pets. However, they belong in the house, not out in the field where they can prey on wildlife.

I received the following note on my website, www.nature-track.com, from Kari of San Antonio, Texas: “Just read your hit piece on skunks. Some nature blogger you are. Prepare to be famous among every skunk fancier (wild and domestic) from South Texas to Canada. I'll bet you'd have a nervous breakdown if anyone proposed treated (sic) free ranging feral cats the same way. What a creep!”

She was referring to a piece I wrote almost two years ago for the website under the Living with Wildlife section. In it, I outlined a humane way to remove a skunk from under a house and one way of disposing of a trapped skunk.

Kari makes a number of unsubstantiated assumptions in her diatribe, the worst being that I am somehow anti-skunk. That certainly isn’t the case. I think skunks are cool animals, worthy of our respect. With that said, I also don’t believe that there is anything that makes them better than any other animal.

If you haven’t figured out my philosophy on wildlife I suppose it is time I made it clear. I don’t believe that any native species is superior to another and deserves different treatment. A wolf or a bison is not somehow magical or more special than say, a mink or a coyote.

I don’t want to appear insensitive and I may lose some readers over this, but I also believe that in most cases, wildlife must be managed to stay within the bounds of human tolerance. Wildlife management is all about populations, and seldom has the luxury of focusing on individual animals or emotions.

When it comes to feral cats, I am not exactly sure what I am being accused of, but I think she is saying that I support feral cats. I can only say that the natural world would be better off without this introduced predator, recognized globally as one of the top 100 worst invasive species ever. According to the International Union for Conservation of Nature’s Red List, feral cats have been responsible for or contributed to 33 (14%) of modern bird, mammal and reptile extinctions. That is huge.

That situation is made even worse by people feeding these animals. In the biological world where I spent my career, we called these subsidized predators. Supplemental feeding sustains populations at substantially higher levels than a natural food supply would allow increasing pressure on their prey. Popular capture-neuter-return programs do little to alleviate the wildlife carnage feral cats inflict.

In a study published in 2012, researchers developed a scientific approach to determine the impact free-ranging (mostly feral) cats have on wild birds and mammals (you can read the paper at: www.nature.com/articles/ncomms2380). They estimated that cats kill 1.3-4.0 billion birds and 6.3–22.3 billion mammals annually(!) in the continental United States alone. Even the low end of these estimates is staggering. That study did not try to determine the number of amphibians and reptiles killed by cats.

With those kinds of numbers, it seems truly hypocritical for a declared wildlife enthusiast to in any way embrace feral cat populations. Now, before you point out that the cats are doing us a favor by keeping rodents at bay, I might remind you that there would be plenty of foxes, coyotes, skunks, owls, hawks, shrikes, weasels, snakes and more that would love to take that job if it were not for cats.

I guess I am who I am and I don’t feel the need to apologize. If my inbox fills up with hate mail, the delete key is only a stroke away.