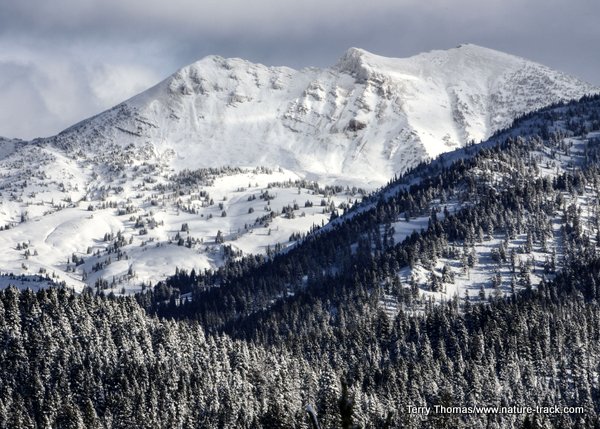 High country is beautiful when covered in snow, but that same snow can form a deadly snare when it avalanches down hill.

Almost 50 years ago, my friends and I donned our wood and rawhide snowshoes and headed up Millcreek Canyon in the Wasatch Mountains east of Salt Lake City. Our destination was Alexander Basin beneath Gobbler’s Knob where an avalanche, reported to be the biggest in Utah’s recorded history, had occurred several days earlier. After an hour or so of slipping and sliding around in our less than perfect snowshoes, we could see the avalanche and the path it took from the top of the ridge at over 9,000 feet on its 2,000-foot vertical run.

The huge pile of snow was studded with broken trees jutting out like a box of discarded toothpicks. We couldn’t tell how deep the snow actually was, but it completely filled the draw at the bottom.

I was reminded of that very spot last week when the tragic news out of Utah hit the wires. Four back country skiers were killed and four others were able to dig themselves out after the snow in Alexander Basin broke free and avalanched to the bottom. I suppose we should be glad only four of the eight were killed, but that is still a terrible death toll, part of the 21 avalanche deaths occurring in seven states this winter, 14 since February 1.

Avalanches occur when gravity exceeds the adhesive quality of the snow layers. Imagine a snowpack as layers of glass. Each layer represents a snowstorm and there can be many layers in a snowpack. If you put glue between some of the layers, they now essentially become one layer. However, if you put oil between two layers, the layers will not bond together. Add a trigger, something that breaks the bond like the weight of a skier or snowmobiler, and the upper plates will slide off.

With snow, where and how this happens is a matter of conditions. Fresh snow, especially when there are piles of it, is often the most dangerous. It has not had time to sinter (adhere through pressure) to the existing snow and can easily slide with just a little motivation.

The type of snowflake also plays a role. Some storms start out with tiny round balls called graupel, and as might be expected, these can act like tiny ball bearings between the existing snow and the new snow making an unstable snowpack.

If snow falls on an existing unstable surface such as hoarfrost, avalanches will follow. These large ice crystals keep the two layers from bonding together and so long as the crystals don’t change, when enough snow builds up, gravity takes over.

Most avalanches occur on slopes between 30 and 45 degrees. Unfortunately, these are the same types of slopes humans like to recreate on. A black diamond run on a ski resort is typically about 35 degrees. Steeper slopes tend to run more frequently and trees don’t get a chance to establish there making these dangerous spots easy to see. Low slope avalanches do occur though, and even trees on a slope are not a guarantee that an avalanche won’t happen.

Sometimes an unstable layer forms within the snowpack. These changes can occur without warning, creating a depth hoar that may be several inches thick. When something causes these crystals to collapse, a slab avalanche occurs.

Avalanches are one of the most dangerous of all naturally occurring phenomena. When a slab avalanche is triggered, it brings snow that may weigh as much as 1,000 pounds per cubic yard barreling downslope at speeds up to 80 mph. Very little can withstand an avalanche.

Winter back-country travel is dangerous. Avalanches do happen naturally, but 90% of fatal avalanches are triggered by the victim or someone in his or her party. Proper gear, training and common sense will go a long way to keeping you safer.