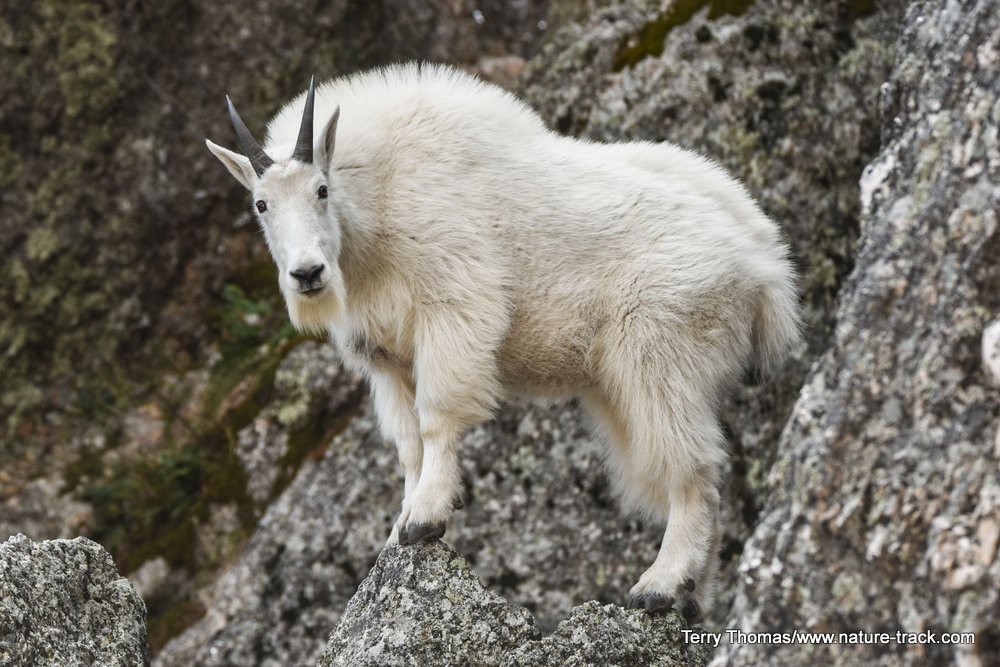 Mountain goats. We all love them but sometimes transplanting them into new habitats comes back to bite us.

When I first heard of Grand Teton’s “final solution” to the mountain goat issue, I have to admit, my knee-jerk reaction was probably similar to many people in the area. Really? They are going to eliminate mountain goats in order to protect bighorn sheep? That seems a little extreme. Like everyone else, I LOVE to see the mountain goats just east of Alpine, Wyoming.

Here’s a quick review of the issues. The bighorn sheep in Grand Teton are one of four herds in Wyoming considered coordinative herds. This herd is a small isolated native herd that has never been supplemented or extirpated and re-established. It is in decline (down to 80 animals from an estimated 125 animals just a few years ago) and may not withstand additional stresses.

The final argument for removing the goats is that the best science and historical records indicate that the mountain goat is not native to the greater Yellowstone ecosystem. In the case of the Teton herd, its progenitors were introduced by Idaho Department of Fish and Game in the Palisades Range south of the park over 50 years ago. They expanded eastward into Wyoming and then north into the Park. Mountain goats are native to North America, but in the Teton Range they are exotics, unnatural competitors with the sheep.

So, it comes down to a choice between the two species. It isn’t going to end well for one of them. Should we protect the native sheep and remove the goats or let the goats eventually replace the sheep? We can’t have it both ways.

Are there other alternatives? Sure. The Park could allow hunters to do the job. After all, there has been a limited elk hunt on a small portion of the Park for years. However, this could, quite literally, require an act of Congress.

How about trapping and transplanting? There is precedent for that. Olympic National Park is in the third year of removing 700 plus non-native mountain goats (transplanted to the Olympic Range in the 1920s for sport harvest) from the park to stop habitat damage to fragile alpine ecosystems that evolved without grazing pressure from bighorn sheep or mountain goats.  The first two years have resulted in the removal of about 330 goats at a cost of about $2,700 per goat, or about $900,000. Those that remain after this coming season will likely be shot. And this wasn’t the first time for Olympic National Park. They removed 400 mountain goats in the 1980’s, but apparently didn’t get them all. Some people in Washington State question whether it is appropriate to spend this many taxpayer dollars on a species sometimes referred to as invasive. Seems that the parks can’t win this game. No matter what they do, there will be vehemently vocal critics.

Despite my original misgivings, the Park Service plan seems to be fiscally and biologically responsible. To do nothing is the same as to say that the exotic mountain goat will eventually destroy this herd of bighorn sheep and that just isn’t acceptable to me. So, with a tear in my eye for the goats, I give the thumbs up to the sheep.

First, bighorn sheep and mountain goats in GTNP are competing for the same, relatively small, piece of winter range. Mountain goats are more aggressive and will win that battle eventually. In areas where they are both native, this issue was sorted out eons ago and competition is likely relatively minor.

Second, is disease. The mountain goats in GTNP may have all five of the known viruses known to be highly lethal (like nearly 100%) to bighorn sheep. Domestic sheep ranching on public land in the Palisades Range to the south is big business with thousands of sheep grazing there each summer, often right next to mountain goats. Because of this, the Palisades Range will never be suitable bighorn habitat. In addition, the mountain goats are likely picking up the disease vectors, which don’t really affect them, and transporting them to the bighorn sheep in GTNP. This isn’t happening in Glacier NP.