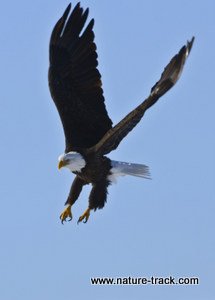 Bald eagles can be seen just about anywhere in south Idaho during the winter months. But if concentrations of eagles are of interest to you, check out Camas National Wildlife Refuge, The National Elk Refuge or Farmington Bay Wildlife Management Area in Utah.

Bald eagle watching and North Idaho go together like brats and kraut. In December, migrating bald eagles flock to Lake Pend Oreille and Lake Coeur d’Alene to feast on spawning Kokanee salmon. Salmon runs are ten times better in Lake Pend Oreille than they were just a handful of years ago and eagles have increased from dozens to several hundred. That rivals the glory days at Homer, Alaska when Jean Keene, the Eagle Lady, fed hundreds of eagles all winter long.

However, North Idaho is an eight hour drive away and few of us are able to take advantage of that opportunity.  The December phenomenon doesn’t last either, with many of the birds winging south to places like southern Idaho, Nevada and Utah for the remainder of the winter.

In  eastern Idaho we do have the South Fork of the Snake River right outside our door with the highest breeding population of bald eagles in Idaho. That means there’s a chance to see them there most of the year, including during the winter so long as access permits.

But there are a number of places where we can see bald eagles this time of year besides the South Fork. Since bald eagles are partial to a fish diet, anywhere there is open water there is an opportunity to see eagles. If ice fishing is occurring, say on Ririe Reservoir, rough fish left on the ice can attract eagles and make them easy to see.

Many bald eagles add carrion to their diet during the winter months. Winter-killed and road-killed  big game can attract a number of eagles. This occasionally puts eagles in jeopardy of becoming roadkill themselves but also means that bald eagles can be found just about anywhere big game frequent. We recently visited the National Elk Refuge in Jackson where thousands of elk congregate each winter. Even in the best of winters, some elk die, providing a wonderful protein source for eagles. We saw over 20 bald eagles that day.

While seeing an eagle as a matter of happenstance is a wonderful event, seeing dozens or hundreds at a time is incredible. Fortunately, we have two areas, one very close by and another less than three hours away where we can see not only one, or even ten, eagles but rather dozens at a time.

One place is Camas National Wildlife Refuge west of Hamer. The magic happens in the evening when bald eagles roost in the cottonwood shelterbelts north of the headquarters building. During the cold snap around Christmas there were nearly 60 birds every evening. As the weather has warmed, some eagles have found different roosts but many can still be seen each evening silhouetted against the setting sun.

The second place requires a drive to Utah’s Farmington Bay Wildlife Management Area. Up to 400 eagles may congregate there taking advantage of the abundant waterbirds. In fact, February is declared Bald Eagle month and this Saturday, February 14, is Bald Eagle Day. Get more information at: http://wildlife.utah.gov/calendar.html.

So it would seem that while North Idaho eagles can give quite a show in December, it is likely these same eagles are much easier for us to see in early February.