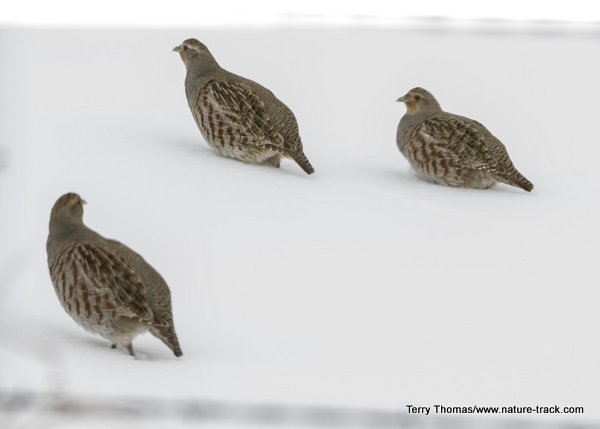 Gray partridges do not migrate when winter assails them. They are well adapted to winter’s harshness.

Winter is usually hard on wildlife. Bitter cold weather drives a need for more calories, often a lot more. Calories can be hard to find though—lakes, ponds and even rivers freeze and snow often covers everything else. Many animals can cope with the cold but cannot find enough food. They either migrate to where food is still abundant or hibernate the winter months away.

One of a trio of upland gamebird imports in our area (pheasant and chukars being the other two), the gray partridge does neither. This tough little bird evolved on the steppes and hills of Eurasia, learning to find food despite the snow and coping with severe winter weather

Once called the Hungarian partridge or Hun, the gray partridge doesn’t need a lot of habitat to survive. I recently saw a wintertime flock west of Osgood. Once an area known for pheasant hunting, advancing farming technology replaced small fields surrounded by ditch banks, fencerows and low spots with huge circle pivots. The formerly abundant pheasants could no longer make a living there but the gray partridge has held on.

Gray partridges are small chicken-like birds with males and females similar in appearance. They seldom weigh in at a pound and sport rounded wings with a wingspan of only about 20-22 inches. They have short necks and tails and are gray-brown on the back and chest with barred sides. Their face and throat are red-brown and bill and legs are gray. There is a rusty red upside down U-shaped belly patch.

These are very social birds and if you see one, you are likely to see up to a dozen or more.

Gray partridges are also ground dwelling birds preferring grasslands and shrubs to trees. They nest and forage for seeds on the ground. They are good runners and seldom fly very far unless disturbed. When they fly though, they are like little missiles, flying strong and fast. They tend to flush as a group too, producing a whirring/buzzing sound that is distinctive.

Gray partridges survive, in part, because they are the champions of the bird world in the number of eggs they lay. The average clutch size is 16-18 eggs, but they may have as many as 22. That is incredible production, but many don’t survive to adulthood.

You will find gray partridge throughout most of Idaho in grassland and shrub habitats. However, they are usually also tied to some type of agriculture, most often small grain production. So long as there is at least some cover around—canal banks, railroad tracks, sagebrush or even weedy field corners, at least a few gray partridges are likely to make it their home.

Changes in farming practices, urban sprawl and other habitat changes have combined to reduce the number of gray partridge across the country. Some people worry that further declines may lead to a proposal to list the bird as threatened. However, that cannot happen because, being an introduced species, it is not protected under the Endangered Species Act which is reserved for native species.

While most of our birds are sitting out winter in the balmy weather of Arizona, New Mexico and even Central America, you can still enjoy watching the winter antics of the resilient gray partridge.