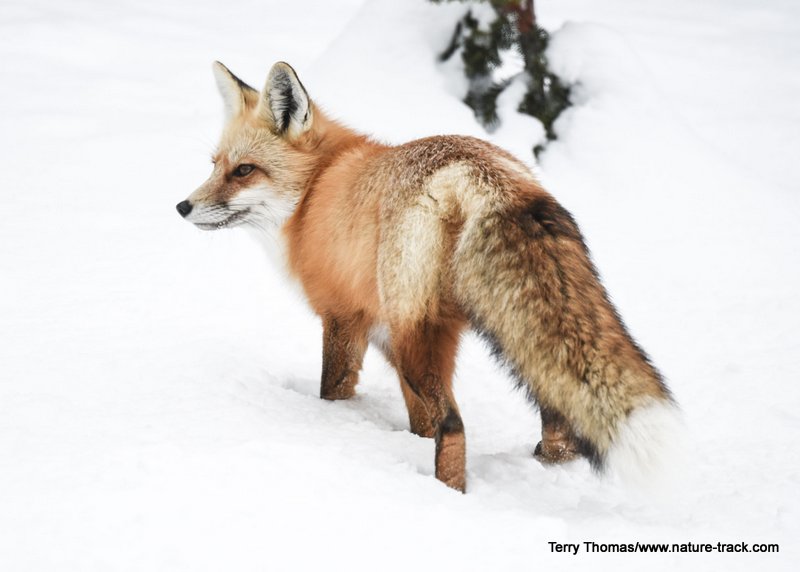 Does a red fox have fur or hair? The answer might be, both!

The hair on the elk hide I was examining was a winter pelage, thick and somewhat coarse even when smoothed with the grain. It was up to four times thicker than an elk’s summer coat. I measured the hairs on the back and found that they were about two inches long but those on the neck and rump stretched to three and a half inches. As I parted the hairs and looked in vain through the forest of shafts for the skin below, I noted that the hairs were far thicker in diameter than human hairs. Although I couldn’t see it, I knew that inside each hair was an air-filled chamber that helped to insulate against the coldest temperature. This was the inspiration for synthetic insulating fibers.

Hair is a defining characteristic of mammals. Hair is assembled largely of the protein keratin; the same hard substance also makes up skin's epidermis, feathers, horns, hooves, claws and fingernails. Each hair has three layers: the outer cuticle of shingle-like overlapping flat cells and covered with a single molecule deep layer of lipid which waterproofs the hair, the cortex containing the keratin in rod-like conformations, and the medulla, an airy open and rather disorganized center.

Hair grows from a follicle buried deep (one sixteenth of an inch) in the dermal layer of skin. There are 20 different cell types associated with a follicle and the production of a hair. Through a complex interaction between hormones, neuropeptides and immune cells, hair follicles determine which kind of hair to grow. That is why you don’t have eyelashes on the top of your head.

I wondered how this elk hair differed from say, hairs on insects. The answer was simple. Hairs on insects, more properly called setae, are not made of keratin, but rather, chitin. Chitin is nitrogen-based, not a protein.

Hair comes in many forms. Human hair has been classified into as many as 14 different types. Whether we have straight, wavy or kinky hair depends on the hair’s cross section. Round hairs produce straight hair, elliptical cross-section hairs produce wavy and curly hair and very flat hair produces the tight curls of kinky hair.

There are three basic types of hair: sensory, ground and guard hairs. Sensory hairs (vibrissae) include whiskers that animals use for perceiving their environment. Ground hairs are soft under hair for insulation and guard hairs are longer coarser hair for protection. However, hair has been modified in a number of ways. For instance, porcupine and hedgehog quills are modified hairs as are the protective scales on a pangolin.

What about fur? Scientifically, fur is hair. There is no difference. We often think of fur as being soft and supple, but why then when it is on the dog or cat is it fur and when it is left on our furniture is it hair? The word, fur, first came into use in the English language as a verb meaning to line or trim a garment with animal hair. Since animals with softer hair were preferable, the word fur became associated with animals such as mink, marten and fox.

With most animals such as the elk I examined, hair grows to a pre-determined length. Here, finally, humans win. We have the ability to grow the longest hair with the 2015 record being 18.43 feet long—nearly as long as a giraffe is tall.