It seemed strange, scary almost, to be walking on top of a frozen lake. Beneath the soles of my boots, a layer of beautiful ice was all that separated me from a watery grave in the now frigid waters of Henrys Lake. The ice auger whirred loudly, drowning my misgivings as it carved a 10 inch hole through the crystalline surface.

When the blade cut through and was withdrawn, icy water gushed from the hole and flooded over my boots, renewing my apprehension. The eight inches of ice was clear and solid enough to likely support a light truck though, so I relaxed and plunked a lure down the hole and began to fish.

If water behaved like most substances, there would be no such thing as ice fishing. Most matter becomes increasingly dense as it gets colder and freezes from the bottom up. The surface is the last spot to freeze.

Water is almost the opposite. To a point, water also becomes denser as it cools. This cooling water sinks to the bottom of the lake, forcing warmer water to the surface where it also cools and sinks back down in a process called convection. This continues until the entire lake column has been chilled.

Ice forms when air temperatures are below freezing and the already chilled lake surface radiates still more heat to the atmosphere. It starts at the shoreline, where the shallow water loses heat the fastest. Ice crystals adhere to rocks and debris building into a formation called an ice foot. The ice foot spreads from the edge into the deeper portions of the lake. How fast ice forms is largely a function of average temperature.

A few years ago, we witnessed how wind can upset this process. Ice formed during the night on Henrys Lake, but by the next afternoon, most of it lay in windrows on the north shore, driven to ground by a south wind. Even super-cooled water, water colder than 32 degrees Fahrenheit, may remain in a liquid state, if wind is stirring it up.

Once the surface ice forms, the ice grows thicker by adding crystals to the bottom of the ice pack as the layer of water beneath it continues to cool. The process only stops when the ice itself, or in combination with an insulating layer of snow, retards the heat lost from the water.

The fact that ice forms on top of the lake makes all the difference for fish. If freezing started from the bottom as with other substances, most aquatic invertebrates could not survive. Their loss would have dramatic impacts on the entire system, especially fish.

There is one other fact about ice: scary or not, it is the only way a regular guy like me is ever going to walk on water. 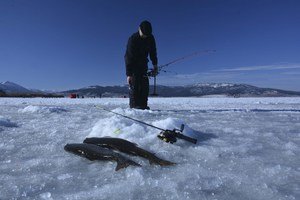 Because water freezes from the top down and not the bottom up, even regular guys can “walk on water” and enjoy ice fishing.