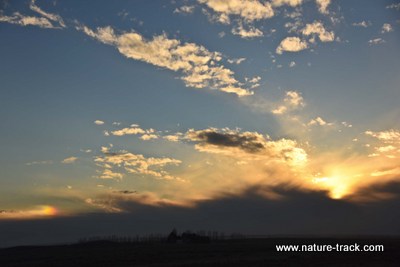 Sun dogs form when sunlight reflects off of ice crystals in the air. The larger the crystals, the taller the sun dog will be. Here a small sun dog can be seen far left of the setting sun.

As the sun rose over Yellowstone’s Pitchstone Plateau, it sent long rays skipping across Island Park and through the cold air that enveloped me. I could see bright crystals floating in the clear air; diamond dust that made me cough with each super chilled breath. I searched the sky for a phenomenon I was sure would appear and found it south of the rising sun.

It was a sun dog, a bright spot to one or both sides of the sun. Aristotle called them mock suns, and their appearance often concerned our ancestors who seemed to always attempt to attach supernatural significance to marvels they did not understand. Natural phenomena were often construed as omens, and frequently used to predict the future as well as the weather.

In our area, sun dogs are most frequently seen during the winter time. This isn’t so strange considering that it takes atmospheric ice crystals to make sun dogs appear. Sun dogs form when light from a low angle sun (sunrise, sunset) refracts and reflects off the surface of hexagonal ice crystal plates in the air. This occurs up to six miles high in cold cirrus or cirrostratus clouds but can also happen much closer to the earth during frigid weather that creates ice particles in the air.

As the ice plates float downward, the sunlight is bent and deflected at a minimum of 22°. This usually causes a sun dog on each side of the sun although only one may be visible from a given location. The larger the ice plate, the taller the sun dog.

The crystals act like prisms, splitting the light into colors. The side of the sun dog toward the sun is always red. The far side may be green, blue, yellow or bright white.

It would be inaccurate to call every heavenly optical spectacle a sun dog. Sun dogs are members of the ice crystal halo family of optical phenomena. The two bright spots on either side of the sun are the sun dogs and are called parhelia (singular: parhelion) which is a Greek term meaning, “beside the sun”. There are also halos of which the 22° halo is the most common. It is a full circle ring around the sun that makes it look like a hole in the sky. Pillars are columns of light directly above the sun. Circumzenithal arcs of many types may also appear, often looking like upside down rainbows. Other optical phenomena such as rainbows, coronas and glories are formed by light refraction through water droplets.

It isn’t uncommon for multiple ice crystal phenomena to happen in complex associations. Pillars, 22° halos, sun dogs and several different kinds of arcs can all appear at the same time when conditions are right.

All of these phenomena can also occur in association with the moon or even with street lights. The common factor is ice crystals and any strong light source will do if the angles are right.

These recent cold clear days have been ripe for the formation of sun dogs and their relatives. Discovering ice crystal halos, whether sun dogs, pillars, halos or arcs, is just one of the many things that make winter great.