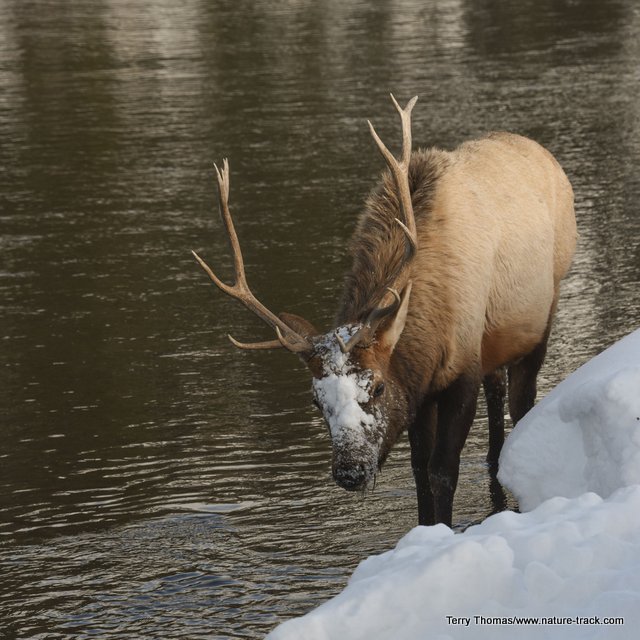 Finding wintering wildlife isn’t as hard as it might seem if you just know where to look.

During the winter months, it is easy to assume that all our natural world is running at a low idle, keeping the fires stoked just enough to allow a reawakening come spring. That supposition leads to the reasoning that wildlife encounters will be scarce as dinosaur sightings. That is not the case, but you do need to know where to look and sometimes be willing to travel a bit. And if you are relatively new to the area, finding places on your own can be difficult.

So, with that in mind, I am going to divulge some of the best places to see wildlife in our area during the winter.

Most big game animals migrate from their summer haunts to lower country to spend the winter and that can be a good thing for wildlife watchers as the animals are concentrated in specific areas. Some winter ranges, such as Sand Creek desert north of St. Anthony, are off limits to human visitation, but there are many other places you can go. For instance, you can often see mule deer, moose and white-tailed deer on the South Fork up or down stream from Heise. Early morning and late afternoon are best. Scan the foothills with binoculars for mule deer and look in the riparian areas for moose and whitetails.

Bighorn sheep can be found by traveling to Jackson, Wyoming’s National Elk Refuge and taking the refuge road that goes behind Miller Butte. If you take Main Street past the hospital, you should drive right to it. You can also find bighorns near the junction of Highway 87 and 287 west of Quake Lake, Montana. Both of these are a bit of a drive from Idaho Falls and early mornings are best.

Elk can be consistently seen at the National Elk Refuge mentioned above and you can even take a sleigh ride to see them. Check with the visitor center north of the Forest Service office in Jackson. The Madison River, along Highway 287 toward Ennis, Montana, is another great place to see lots of elk. If you have access to snowmobiles, try Fall Creek out of Swan Valley. Just remember that you are restricted to the trails. The hills and canyons are for the wintering elk and mule deer.

The best place to see mountain goats is Alpine, Wyoming. Just start up the canyon toward Hoback and watch for goats on the south face to the left. Make sure to use one of the pullouts to stay out of the way of traffic.

You can find lots of waterfowl, including swans, by finding open water. Common places include downtown Idaho Falls by Freeman Park, Harriman State Park, Last Chance and Mack’s Inn in Island Park, South Fork of the Snake River and Deer Parks Wildlife Mitigation Unit west of the North Menan Butte. This last one can be home to over 2,000 swans some winters. That is quite a sight.

For mammals like foxes, coyotes and rabbits, try Market Lake WMA at Roberts, Cartier Slough WMA next to Beaver Dick Park on the Henry’s Fork of the Snake River or Mud Lake WMA near Terreton. These are all accessible to vehicles, but four-wheel-drive is recommended. Craters of the Moon National Monument west of Arco is also a good place, but the loop road is closed until spring and you will have to snowshoe in.

Don’t forget that even though the inner road through Grand Teton Park is closed, the highway is still open as is the Gros Ventre road up to Slide Lake. There can be a lot of wildlife there. Also, the inner road is open from the north as far south as Signal Mountain Lodge. One of my favorite fox images came from there one winter.

Finally, even though most of Yellowstone is open only to over-the-snow guided tours right now, Lamar Valley is still open to all wheeled vehicles. It is a bit of a jaunt so we usually book a room in Gardiner. Depending on when you go, there can be a lot of wildlife opportunities there.

So, get out and find some wildlife to watch. There are plenty of opportunities if you look for them.