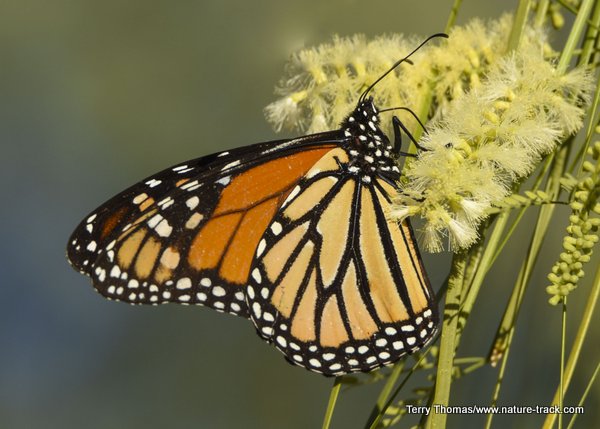 Monarchs are one of the most amazing creatures on the planet. Learn more about what it will take to sustain healthy populations at:  https://monarchjointventure.org/

It seems a little strange to be thinking about monarch butterflies, or any insects for that matter, as winter officially starts today. We spent the last week in Yuma, Arizona, though, just 20 miles from Mexico and a stone’s throw from California. We saw a monarch butterfly and I guess that set everything into motion.

This particular butterfly was alone and it immediately had me wondering about its story. Was it a locally grown monarch? Had it strayed from a large migrating group of monarchs? Was it somehow injured and unable to keep up?

Monarchs are migration marvels. It seems a strange behavior for an insect, most of which tough out the winter in a near frozen state or die after laying eggs that carry on their legacy the following spring. It is especially puzzling when you consider that the monarchs that migrate home to summer range are not the same ones that migrate back to winter range up to 2,000 miles away. Since summer monarchs live only two months, several generations separate them, meaning that no monarch that heads south has ever seen the land it is heading to or the pathway that leads to it.

Although the lifespan of a summer monarch is two months, those that make the southern journey live longer. They are called the super generation and they bear a significant burden. In their seven months of life, they journey to and from the winter area and lay the next generation of eggs.

Through citizen science research, the migration routes of many monarch populations have been documented. Almost all monarchs from the east and central states funnel into a tiny overwintering ground in southern Mexico. Populations west of the Rocky Mountains winter along the coast of California.

The small location in Mexico is really just that. Managers have calculated the actual occupied forest of the entire wintering eastern population at 7.19 acres for the winter of 2016-17, down from 9.91 acres the previous year. The tiny footprint is because monarchs gather in huge clusters clinging to a single tree and each other. These individual trees may support a million butterflies, making each tree tremendously important.

These highly concentrated winter populations are wildly vulnerable to habitat changes and weather. The trees that the monarchs overwinter on are valued by locals for income, construction and firewood. And even if select trees are protected, like holes in a blanket, removing neighboring trees can expose the butterflies to deadly winter weather. In 1995, a single storm killed an estimated six million monarch butterflies, repeating a similar episode that occurred in 1992.

Although the summer homes of monarchs are widely scattered across thousands of square miles, they are equally susceptible to change. Monarch caterpillars feed only on many varieties of milkweed. Through habitat conversion and the targeting of milkweed as a noxious weed, habitat for monarchs on summer ranges has declined precipitously.

Monarchs have been the state insect of Idaho for 25 years. But they are in danger of failing the Idaho state motto, Esto Perpetua (roughly translated, may this be forever). It seems rare these days to see a monarch in eastern Idaho.

If you want to give nature a Christmas gift this year, plan now to establish a pollinator garden in the spring, one that is heavy on milkweed. As individuals, we can’t do much about what happens in Mexico, but we can do our part to reverse habitat loss in their summer ranges.