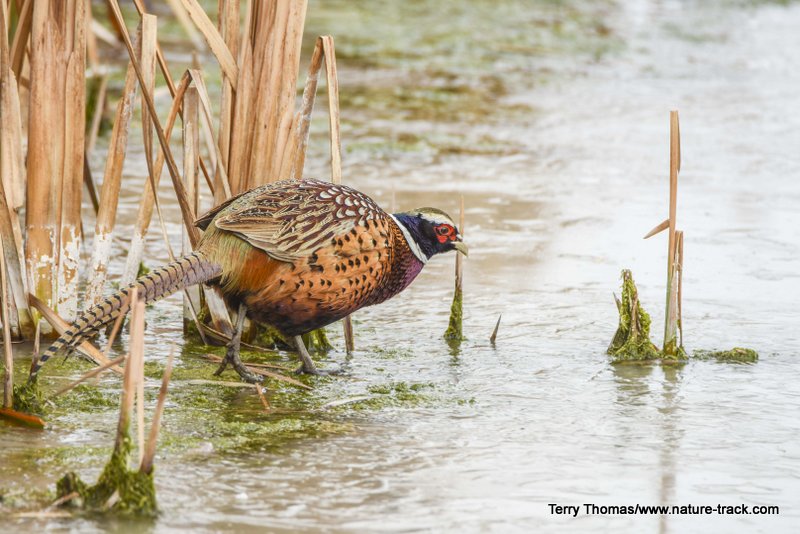 A rooster pheasant forages on the ice at Market Lake WMA, accessing areas not normally available during warmer months.

Market Lake WMA was cold and snow-covered last Christmastime as I poked around looking for something to photograph. A bit of color caught my eye and I grabbed my camera. A rooster pheasant was walking along the edge of the marsh, using the ice to get to food sources normally unavailable to it. It wandered from patch to patch of cattails searching for seeds and other bits of food, seemingly oblivious to the cold weather.

A little later in the afternoon, cottontail rabbits stood out against the snow as they soaked up the afternoon sun on a cold December day. Never far from their holes and always vigilant for predators, they seemed to be actually enjoying the cold.

This was a reminder that winter season isn’t always tough on critters. Those that can’t tolerate the cold and snow have adapted behaviors or physiological responses to avoid it. Bears sleep through the winter, depending on stored fat for energy. Theirs isn’t a true hibernation like ground squirrels and marmots where heart rate, breathing and core temperature all drop to very near death and where the awakening process takes hours. Bears are in deep sleep but do wake from time to time and even give birth to their cubs during this time.

Big game animals usually migrate. They seek lower elevations where snow may not be as deep and forage is exposed. Physiological changes also help them through. Studies have shown that big game animals consume less during the winter, even when provided with all the food they can eat. Like many animals, they also grow a thick insulating winter coat.

For other animals, winter may not be such a big deal. Pikas spend the summer preparing food for winter. They harvest forbs and grasses which they store in strategic locations within their rocky homes. Just like livestock, they live on these “haystacks” all winter long. Winter may actually be a safer time for them as they live beneath the snow out of sight of predators.

Dusky grouse, once called blue grouse, have an unusual strategy for dealing with winter. Instead of heading downhill to lower and warmer elevations, they move upslope and spend the winter feeding on the buds of evergreen trees.

Another evergreen forest dweller, the red squirrel, is like the pika, storing food all summer to get through the winter. Because they hang around and are less mobile, their primary mammalian predator, the pine marten, thrives in winter on a diet of fat squirrels.

Sharp-tailed grouse, a native grouse like the dusky grouse, uses snow to its advantage. Each evening the grouse will plunge deep into the snow and use its insulating properties as a winter blanket and to stay hidden from predators.

Speaking of predators, for them, winter isn’t necessarily a season of scarcity and extreme. In fact, it is often a season of bounty. For instance, mountain lions have their best hunting during the winter when prey animals like mule deer are concentrated on winter ranges.

As I left Market Lake, a coyote crossed the marsh, hunting for rodents in the bulrushes and grass. Its glossy coat was thick and full repelling winter better than the best synthetics humans can create. It seemed to pay no mind to the cold as it followed vole trails made plain in the snow. Winter, it seemed, didn't bother it at all.