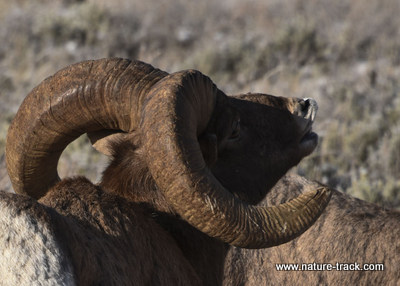 A mature ram tests the air by curling back his upper lip. He is checking for pheromones that signal a ewe is ready for breeding.

As I browsed through hundreds of images taken the previous day, the experience came back in a rush, even things that electrons didn’t or couldn’t capture. I had gone to the National Elk Refuge north of Jackson, Wyoming, to photograph bighorn sheep. The mating season was still on and about 100 sheep were observable from the refuge road behind Miller Butte.

I arrived just after sunrise to find most of the sheep still high up against the rocks and bluffs at the top of the small ridge. They were too far away for a decent photograph so I propped the binoculars on the edge of the window. I saw bighorn sheep everywhere—on top of the ridge, below the cliffs and on the cliffs. A red fox even trotted along the ridgeline, oblivious to the sheep and them to it.

With daylight, sheep began to ease up from their beds and head toward the bottom of the hill. One ewe bounced down the very face of the cliff, showing off her skills and a ram trotted down a trail that angled toward the bottom. Others came in groups.

As they edged into the sagebrush covered flat at the bottom, the ewes and lambs began to feed. The rams, though, had other things on their minds. With noses held high and necks outstretched, they sampled the air, trying to detect a female that might be ready to breed. As the day advanced, rams of all sizes crisscrossed the bottom, wandering from one female to the next. Sometimes their approach was nonchalant, other times, apparently detecting a hotter scent, they strode purposefully, upper lip extended to better sample the air, to check out a ewe’s readiness.

It was clear that the males had already sorted out who was boss. For the group I watched, the winner of the headbutting contests of November was a full curl ram. His horns were scratched and chipped and the tips were broomed and split, all part of the price of victory. The younger rams respected him but still checked out every female they could, sometimes even tagging along behind the patriarch as he drifted from ewe to ewe.

I had been here before so it was no surprise when the bighorns converged on parked vehicles. Soon I could hear squeals of delight from children and adults in the nearby cars as the sheep began to lick salt from tires, fenders and bumpers. In short order, my own truck was completely surrounded and I could feel a gentle rocking as almost 20 sheep jockeyed for position around me. When I leaned out the window, huge brown eyes stared back at me from inches away.

A heavy scent, reminiscent of elk but perhaps less musky, drifted in through the truck window. It was a wild scent though, not the odor of domestic sheep. I drank it in for almost four hours as the sheep went about their daily routine and allowed us humans a unique glimpse at their otherwise secretive lives. It was an unforgettable experience, one that will stir a new reverence for nature in all who fall under its spell.