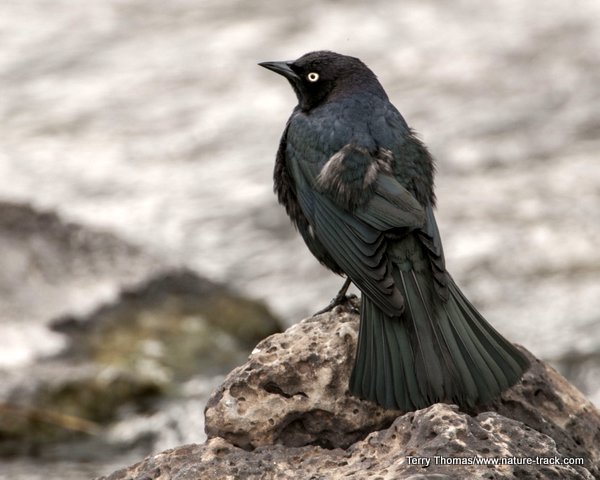 A Brewer’s blackbird may be our closest equivalent of Europe’s common blackbird, the likely candidate for the Fourth Day of Christmas, Four Colly or Calling Birds.

A favorite holiday song, The Twelve Days of Christmas, was first penned in English in 1780 (it may be of French origin) in a little book intended for children called, Mirth without Mischief. It was known as a memory game called, Twelfth Night.

Over the years, The Twelve Days of Christmas has been a real shape changer. It wasn’t set to music for over 100 years and by that time had gone back and forth through numerous substitutions. For instance, what is currently, nine ladies dancing, used to be the eleven ladies dancing and while in that position morphed, according to Wikipedia, into: Ladies spinning, Badgers baiting, Lords-a-leading, Dancers-a-dancing, Lads a-louping, Bulls a-beating, and Lords-a-leaping.

I knew none of this when I absently plucked one of our Twelve Days of Christmas ornaments off the Christmas tree during a family get together and read the inscription: 4 Colly Birds. I laughed out loud. They had made a mistake! Everyone knows that it is, Four Calling Birds, right? A quick check on the internet set me on my arrogant heels. Indeed, the 1780 version listed Four Colly Birds not calling birds.

What in the world is a colly bird? It turns out that “colly” means black or “black as coal”. So, the song really wasn’t talking about just four birds that could sing, but was referring to four BLACK birds or, blackbirds. That actually made some sense as the previous three verses: three turtle doves, two French hens and a partridge in a pear tree, were all references to species or types of birds, not what they were doing.

In the New World, there are at least 26 species of birds named “blackbird”. Those with which we are most familiar include the red-winged, yellow-headed and Brewer’s blackbirds. They are all members of the Icteridae family.

However, in Europe of 1780, a “colly” or black bird was likely the common, or as often called, Eurasian, blackbird, a member of the Turdidae, or thrush, family and the national bird of Sweden. This family is unrelated to the New World blackbirds and includes the American robin and at least 80 other species.

The familiar shrill and raspy calls of our spring crooners, the red-winged, Brewer’s and yellow-headed blackbirds are not much to sing about. However, thrushes are known for their melodic breeding songs and the common blackbird, while not in the same class as the American robin, has a musical tune as well. So, Four Calling Birds, could be equally correct, even if referring to common blackbirds.

Blackbirds also play a role in the Nursery Rhyme, Sing a Song of Sixpence:

Sing a Song of Sixpence, A pocket full of rye; Four and twenty blackbirds baked in a pie! When the pie was opened the birds began to sing, Oh, wasn’t that a dainty dish to set before the king?

This nursery rhyme is not as far-fetched as it might seem. Medieval chefs were very competitive and placing live birds or other creatures into pre-baked pie crusts was apparently a common practice to impress lords and ladies.

I tried in vain to find an actual recipe for a true blackbird pie, but I did find a reference that blackbirds were likely a part of the Medieval diet as a readily accessible source of protein.

Whether it is four calling birds or four colly birds, The Twelve Days of Christmas is a good reminder that the peace and service to others that abounds during the holiday season should last longer than a day or even 12 days. May it continue throughout the coming year.