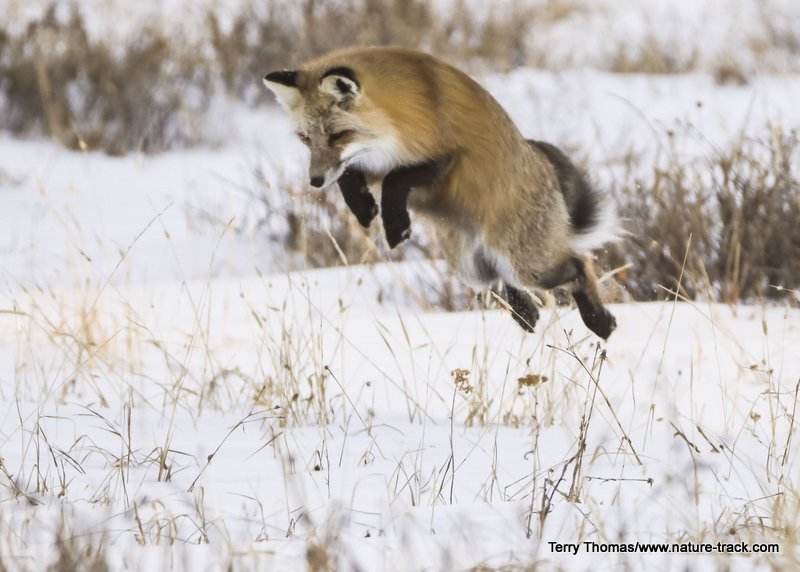 A red fox caught in mid-leap as it pounces on prey that humans seldom see or even acknowledge, yet is the mainstay of a fox’s winter diet.

Last week in Yellowstone’s Lamar Valley, we watched a male red fox hunt for prey in a snow-covered field near Pebble Creek. He would trot along as if on a casual errand, then stop like he had run into a wall. His head would swivel slightly and his gaze would become fixed on a particular spot. After a minute or two as he pinpointed the sound, we could see his body tighten up, then spring forward in a long arc, paws and nose leading the way, to attack some seemingly barren patch of snow. His head would disappear under the snow and seconds later would reappear with the dark form of a vole, short tail still wiggling, in his jaws. A couple of dozen chomps later and the vole would disappear down his throat. Then he was off to hunt again.

Not every hunt ended in success. Probably in 50 percent of several dozen attempts the vole eluded the fox, at least for now. But this fox hunted the meadow every evening so escape may have been just a temporary reprieve. In addition, we saw an ermine hunting voles in this same meadow the year before and at times last week we could see a coyote across Soda Butte Creek in the same area doing the exact same thing as the fox. This was a tough place to be a vole.

While the fox hunted, seven moose browsed on the willows along the stream bank. Bison grazed on the grasses and elk wandered the ridges behind us. Further down the valley, a wolf pack wandered and high above us, we knew of a den where a grizzly bear sleeps away the winter months. Ospreys and eagles pluck fish from the river in the summer.

I sat there in amazement, thrilled and humbled by the complexity of the natural system around us. Foxes, coyotes and ermine all depend upon a resource that we humans seldom see and even less often appreciate. If not for these small mammals, we would observe far fewer of the animals we love to watch. These small mammals, in turn, depend upon other resources, largely plants, in order for them to thrive. Plants depend upon a complex interaction between fungi and bacteria that help roots absorb nutrients. A fertile soil is required for plants to thrive and fertilization depends upon the dung of large animals, the reprocessing effects of fire and the recycling of dead matter and the insects, mites, worms, grubs, centipedes and bacteria that make that happen. It is a never-ending cycle far more complex than we may ever understand.

This insanely complex system is often described as a web, as in a spider’s web. That is a good analogy as far as it goes. Conservationist John Muir is often misquoted as saying, “When one tugs at a single thing in nature, he finds it attached to the rest of the world.” He actually said, “When we try to pick out anything by itself, we find it hitched to everything else in the Universe.” That goes far beyond the simple linear relationship of a flat web. I see it more as a sphere of interconnected threads where plucking a thread at any point may send shockwaves in multiple and unexpected directions. And a sphere gets back to the idea of not just connectedness, but also interdependence and feedback loops.

We can’t begin to assume that we understand all of the complex interactions that can be set in motion by a single action. We can appreciate though, that the system is complicated and we should approach each potential change with caution.