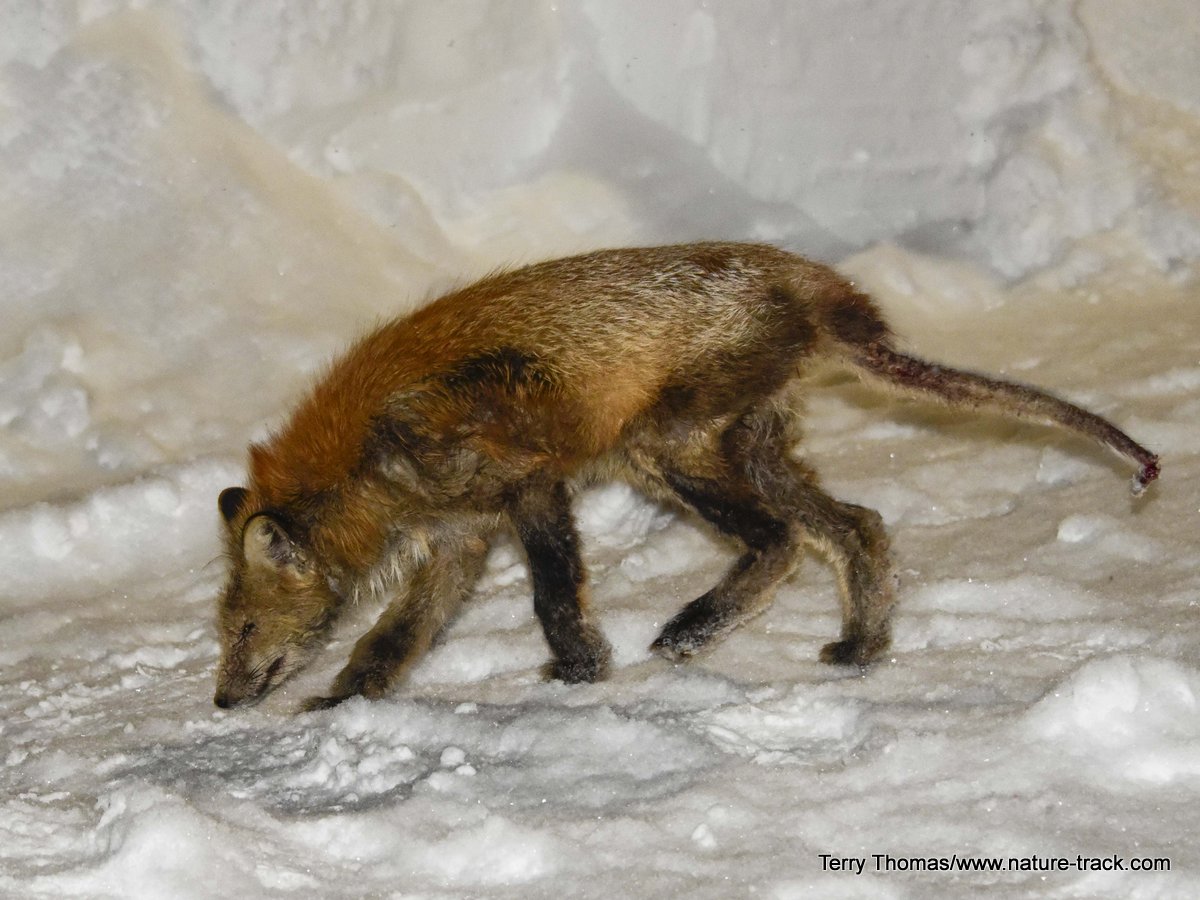 “Our” fox looks miserable as it suffers through an infection of sarcoptic mange.

For the past three winters, after the snow begins to fall, tracks appear around our house. A fox, or sometimes a pair, check out most corners of our yard each night, leaving sign of their passing in the snow. We occasionally get a look at these beautiful animals and that is always a thrill.

This year is different though. The fox that we have seen on several occasions has a naked ropey tail, not the fluffy fur-covered one normally seen, and large patches of hair are missing. Its face looks crusted around the eyes and it walks gingerly, as if its feet are sore, or perhaps its whole body hurts. It has all the classic symptoms of sarcoptic mange.

Mange is a skin disease common in mammals of many species and is caused by parasitic mites, near-microscopic creatures that live in the skin of the affected animal. There are two basic types, although there are many species-specific varieties.

Demodex spp. live in the hair follicles and are present in low numbers in almost all mammals. They are species specific. For instance, the species that is associated with dogs is Demodex canis, while the species associated with cats is Demodex felis. These parasites are not transferable across species. Demodex becomes a problem when the immune system of the host is suppressed for some reason. In humans we call the condition, demodicosis.

The other form, this one highly zoonotic, or transferable to other animals including humans, is caused by mites of the genus Sarcoptes. These vicious little parasites burrow into the skin where females lay their eggs. Newly hatched mites then feed on the living skin of the host.

Once a sarcoptic mite infestation gets started, the animal may succumb without intervention. Hair loss can lead to hypothermia and the incredible itching as a result of an allergic reaction to the mite’s feces (ever hear the phrase, the seven-year itch? It refers to sarcoptic mite infestation, which in humans we call scabies, and which infects around 200 million people). The scratching causes secondary infections when the animal tries to satisfy the itch and damages the skin further.

Besides foxes, coyotes, wolves, mountain lions, bears, deer, squirrels and most other mammalian wildlife can and do develop mange. As a wildlife disease, it seems to be increasing and considerable research is being directed at better understanding it. For instance, a Princeton University team recently published a paper indicating that, “wolves (in Yellowstone NP) with severe mange tended to have less genetic variation than wolves with mild symptoms.”

Mange is treatable. There are effective washes, but that requires the animal to be in captivity. Ivermectin, a medication specific for parasitic infestations, can be administered orally, but requires repeat doses over several weeks, again, not very applicable in the field. A new prescription medication, fluralaner, sold under the trade-name of Bravecto, holds more promise. A single dose can eliminate all stages of mite life from eggs to adults for up to three months. The difficulty is that since mange cannot be definitively diagnosed without a skin scraping to observe under a microscope, veterinarians aren’t likely to prescribe it for wildlife based on observation alone.

So, I am in a dilemma. I don’t want this infection to spread to other animals. Should I let nature take its course—which will likely mean that this fox will perish within the next few weeks? As a professional, that is what I would feel obligated to advise someone with this question. However, it’s personal and that makes it harder. This is “our” fox and I have two more options. Knowing that the result of letting nature take its course is a slow and awful death of the animal, my wife believes that the humane thing is to end its suffering sooner. Lastly, I can intervene and try to get a veterinarian to prescribe one dose of Bravecto. We would have to guess at the animal’s weight and I would have to take care to see that only THIS fox takes the medication, but with luck, I could save the fox’s life.

Would I be changing something in the Cosmos if I intervene? Since records show that mange was actually introduced into the Yellowstone ecosystem in 1905 in an effort to control wolf and coyote populations, perhaps saving “my” fox is just a small way to help set things right.

NOTE: Shortly after I wrote this, we left town for awhile. Upon returning, we discovered that the fox tracks no longer came up our driveway. I must assume that the fox died from his infection. I had checked with a veterinarian and was told that without seeing the animal, he could not dispense a dose of Bravecto, so, by default, we let nature run its course.