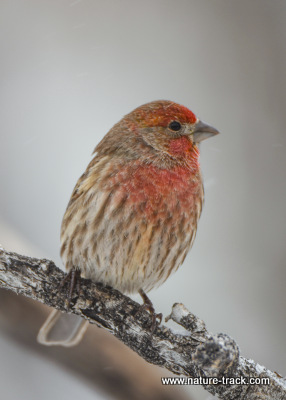 House finches are one of the most common birds, especially around bird feeders. Let’s hope they always stay that way.

Amid a snowstorm on Sunday that plastered the south facing sides of my bird feeders with a thick blanket of wet snow, the birds arrived. With the approach of colder weather, flock size has been growing and this time there must have been 30 or more birds.

As far as I could tell, they were all house finches although a pine siskin or a Cassin’s finch could have conceivably slipped in without notice. They resemble the female house finch and it would take a better look than I gave them to distinguish a difference.

By far, house finches are the dominant birds at my feeders all year long. That doesn’t mean they are bossy, it is just that they outnumber every other species, including house sparrows most of the time. I find this disappointing because I have spent far more than I would admit to on my yard in an attempt to attract a wide variety of birds.

Most birds treat my domain like a leprous island despite shrubs heavy with berries and a wide variety of flowering plants full of nutritious seeds—in addition to feeder foods and a heated bath. But not the finches.

House finches have fully accepted my offerings and in the spirit of Thanksgiving I have decided to be grateful for their unabashed enthusiasm. If other birds reject my offering that is their problem.

Coast to coast, house finches are one of the most common species that take advantage of human generosity with bird feeders. This wasn’t always the case. Until about 1940, the house finch was a western bird, its eastward expansion pretty much stopped by the Great Plains.

New York City pet stores sold house finches illegally though. In 1940, as word of a crackdown on pet stores spread, owners released their illegal charges into the skies of New York City, knowing the rule of corpus delicti would apply—no birds, no crime.

The released birds found the city to their liking. In fact, they found the entire eastern half of the United States supreme habitat and within 50 years had nearly expanded to the western populations.

Normally, this would be a yet another ecological disaster along the lines of the starling and the house sparrow—Old World birds that both got their start in New York City as well. But the house finch seems to have been able to establish without causing much of a stir with the possible exception of competing with purple finches in some locations. On the plus side, they have likely caused a surge in sales for birdseed suppliers.

If you are wondering if you have ever seen a house finch, just look out your window and watch for a gray-brown sparrow-sized bird with a reddish chest, throat and forehead. That is the male house finch. Short wings make the slightly notched tail appear long, the top of the head seems a little flat and the bill is rather stout. Females are much more plain, streaked with white, gray and brown.

Having a common bird eat the lion’s share of the 120 pounds of sunflower seeds I put out each winter isn’t at all bad. It is important that common species stay that way and I am happy to do my part.