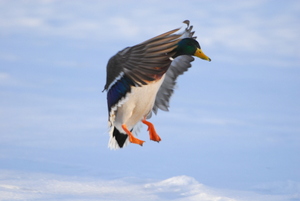 Nature moves fast. If you want to capture that action with your camera, you can increase your odds by following these tips:

·         Forget the tripod. Tripods are just too slow for fast action. If you are shooting a big heavy lens, then a tripod may be a necessity and in that case, invest in a gimbal head. A monopod or a shoulder mount such as a Bushhawk™ is a good compromise.

·         Use higher ISO speeds. If you increase your ISO from 100 to 400, you will gain two stops. As a relic of the film days, I have hesitated to go above ISO 400. Recently though, I have decided that any small loss in sharpness due to grain is worth the cost. I don't hesitate to go to ISO 1000 and recently I watched a webinar where a pro photographer said that he routinely goes to ISO 1600.

The point is to get your shutterspeed up high enough to stop action. That is a variable target. If the animal is heading directly to you, 1/400 may be enough. An animal crossing quickly from the side will require 1/1000 or faster.

·         Pan with the subject. Panning means following the subject with the camera at the same speed. Done properly (which is only accomplished with practice), panning will keep the subject reasonably sharp and will blur the background.

·         Anticipate. Learn the habits of your subject so you can anticipate when the action will occur. For instance, birds often defecate just before they fly. If you see the poop, get ready.

·         Shoot at an oblique angle.  Animals moving directly across the viewfinder are the most difficult to render sharply because they are moving fastest relative to the frame. Animals moving straight into the camera cover the least distance.

·         Use predictive focus. This wonderful invention helps the camera to predict where the animal will be at the moment of shutter release. It isn’t perfect but it ups the odds.

·         Practice. This is by far the most important tip here. Practicing will improve your skills faster than anything.