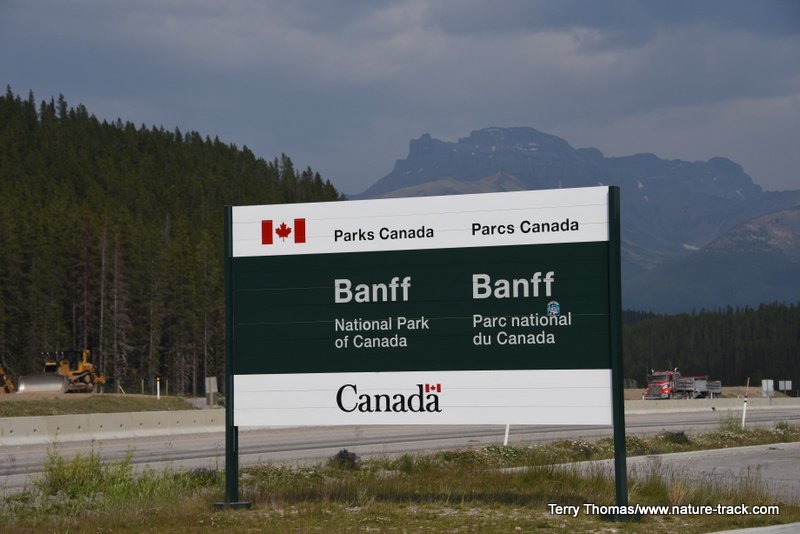 I can describe Banff National Park in Alberta and British Columbia in one word—INSANE. To be sure, the scenery is crazy beautiful, but really, it is the crowds that drove me NUTS and probably colored all my experiences there so be aware of that.

First, a little backstory. We went up through Kalispell. We dry-camped near a full campground about 20 miles south of the Canadian border. BTW, it was not easy to find a campsite so plan ahead.

In the morning, we got up early and headed out. After reading all the rules about entering into Canada, we were pretty apprehensive. However, our stop through the Port of Roosville border crossing turned out to be stress free. I had a firearm with me and had filled out the appropriate paperwork in advance (you don’t need three copies like it says on the website. They will photocopy it after you sign it in front of them and pay your $25 for a 60-day permit to transport). That was the only thing they were interested in seeing. I told them I had bear spray and they were fine with that. Will you have the same experience? I don’t know. We were pleasantly surprised though. 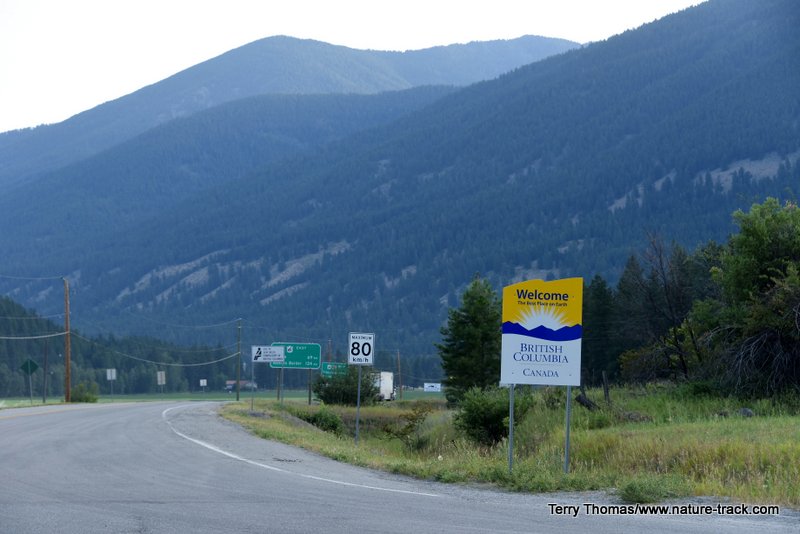 We drove north, finally arriving at Radium Hot Springs, a very nice resort town on the south side of Kootenay National Park. We entered the park, paying for an annual permit for $125 Canadian because we knew we would be in and out of parks both heading to and returning from Alaska. We drove almost all the way through the park and finally decided to look for a campground about noon. We found that Marble Canyon Campground was about half vacant and had no trouble getting a spot (it did almost fill by evening).

A word about camping in the Canadian Rockies parks. Camping sites are at a premium despite the fact that some of the campgrounds hold 1,000 or more units. Jasper, Louise Lake and the campgrounds at Banff are reservable and were all reserved when we checked two weeks in advance. Louise Lake in Banff has an overflow and it supposedly never really fills so there is an option. We didn’t know this when we chose to stay in Marble Canyon, about 10 miles from Highway 1 and Bow Valley Highway and about 20 miles from Lake Louise. This worked out just fine and we loved the campground.

Another thing to realized about camping there is that many of the campgrounds are designated for tents and/or RVs 25 feet or less in total length. With our 24-foot trailer, we are almost exactly 50 feet long and that nearly got us into trouble at Marble Canyon. If you go there, realize that Loop C is the only one designated for “large” RVs. Trailering can be quite a challenge in any of the parks so be aware of that.

When we drove down to the town of Banff on Highway 1, the Trans-Canada Highway, we enjoyed a drive along the river and then headed to town. We were in for a shock. Traffic in this small town was nearly at gridlock. Parking was non-existent in most places and people were thicker than flies on roadkill. I was literally shocked and could not leave town fast enough. We did find the Bow River Falls right in the middle of town and that was pretty cool. We also went to the historic hot springs that sort of started the entire National Park movement in Canada. It was actually less crowded than downtown and worth an hour of time. 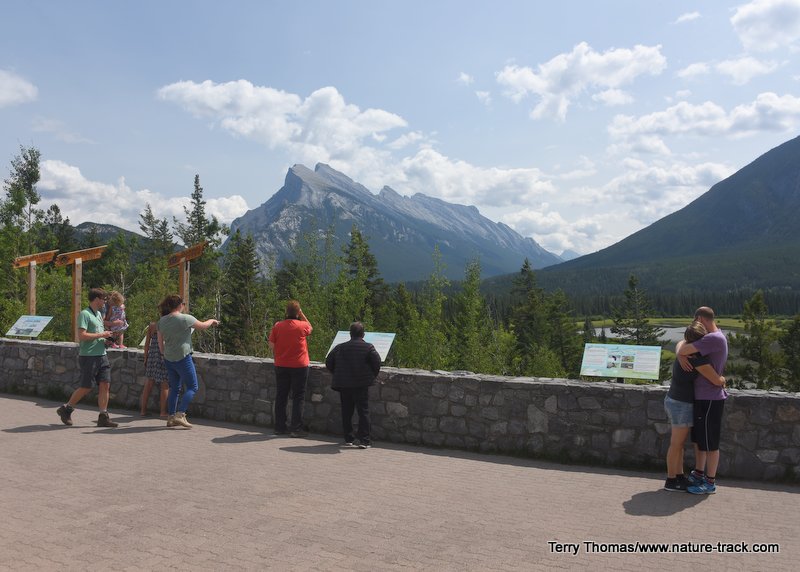 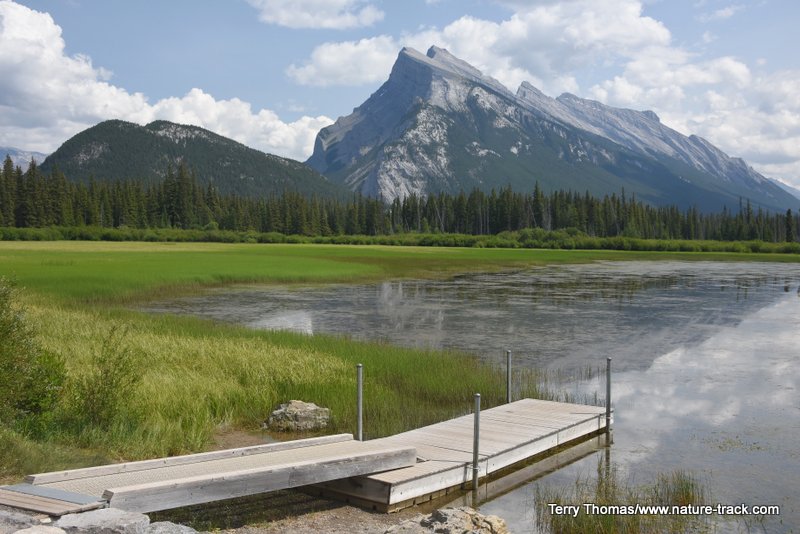 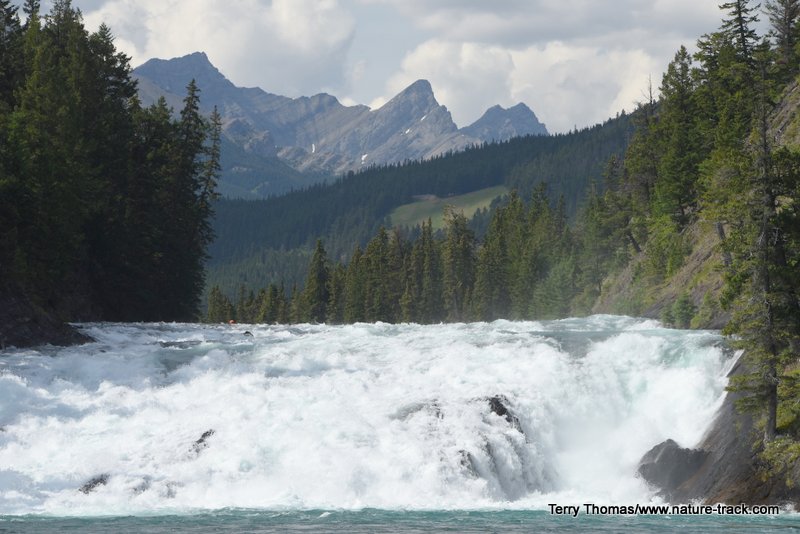 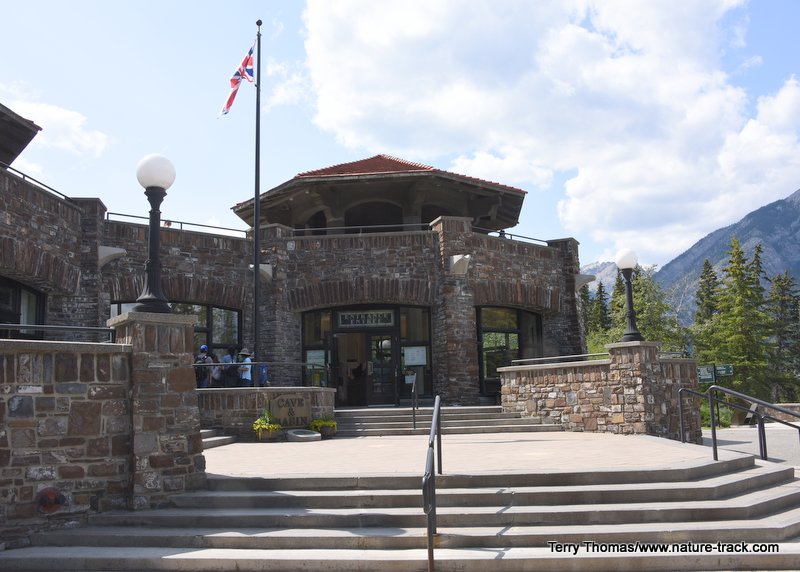 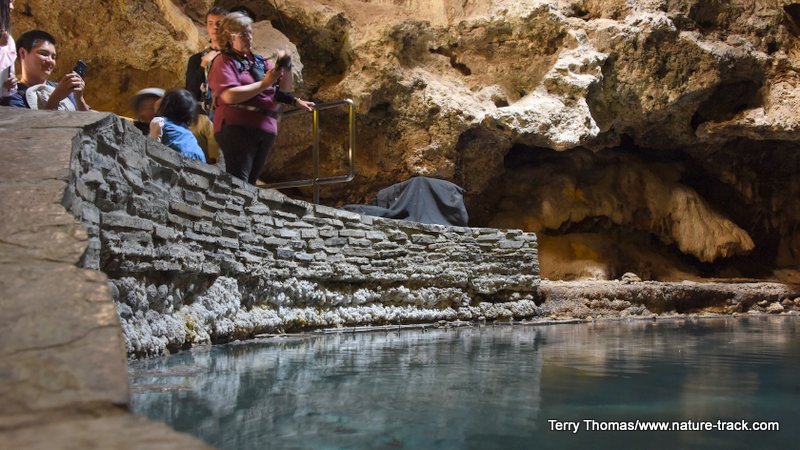 Bottom 2: Hot springs that started the parks system in Canada.

We got out of town as fast as we could and headed to a viewpoint up the ski resort road across from town. This has one of the Red Chair viewpoints where the Park Service literally puts out red Adirondack chairs in extra scenic locations. We had a wonderful view of Banff and the surrounding mountains and it was about as close to the town of Banff either of us wanted to get. 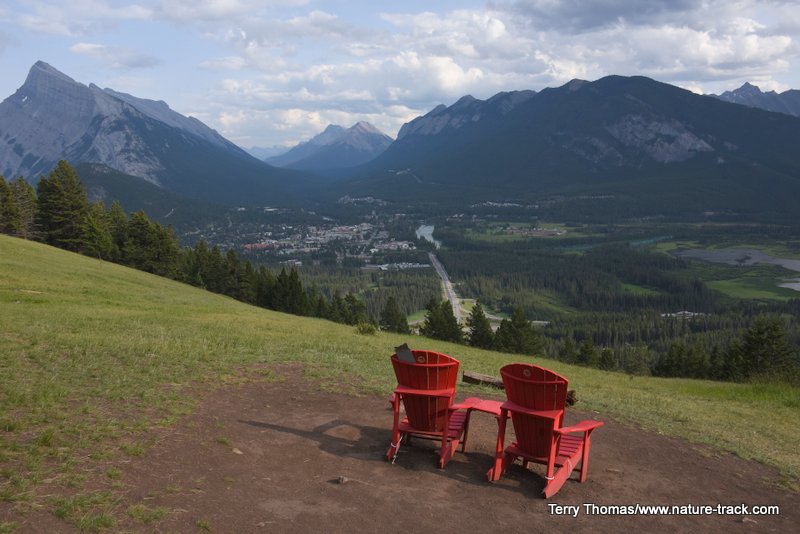 The red chairs are kind of a cool concept. The are apparently located throughout the park system in iconic locations.

One thing about Banff and also Lake Louise is that the gas at either place is the least expensive of any we found in Canada at $1.20-1.24 Canadian/litre. That works out to be about $3.58/gallon U.S. Up the road at a place called the River Crossing, gas was $2.04/litre Canadian or about $5.90 U.S.

We next headed to the vaunted Lake Louise to see the turquoise blue waters caused by glacial meltwater. Even though we arrived after 9 p.m., it was still crowded. We were able to find a parking space though and thought that a positive sign.

Lake Louise is pretty but not worthy of all the hype. Many of the lakes in the Canadian Rockies are the same turquoise blue because most come from glacial runoff full of finely ground rock called glacial flour. We also went to Lake Moraine just a few miles from Louise and it too was turquoise, beautiful and crowded, even at 9:30 p.m. 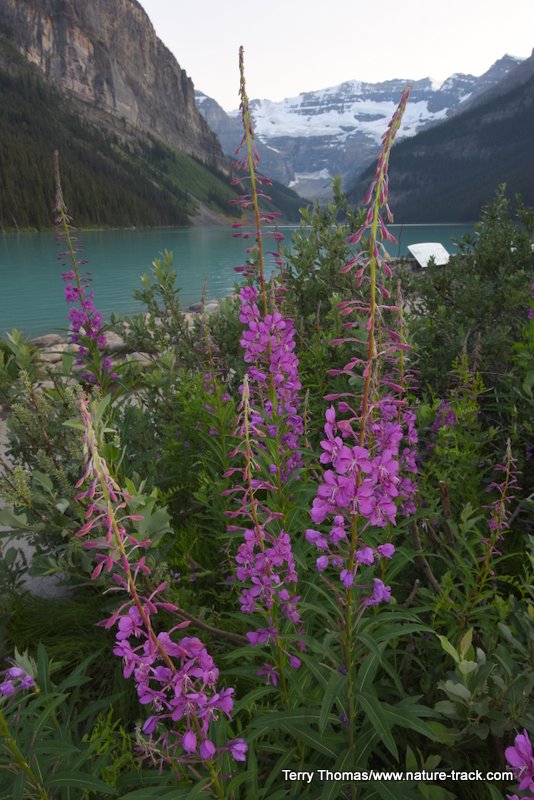 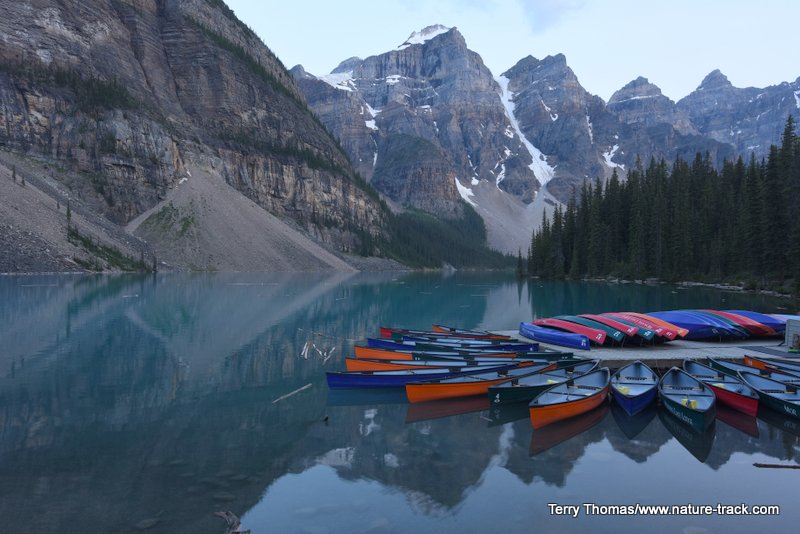 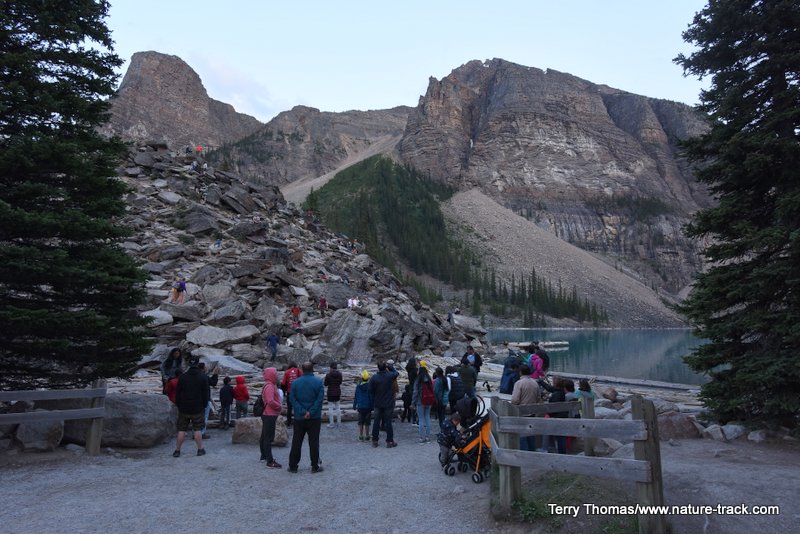 The top photo is Lake Louise. The middle photo is of Moraine Lake as we want to think of it. The bottom photo is Moraine Lake in reality, at 9:30 p.m. 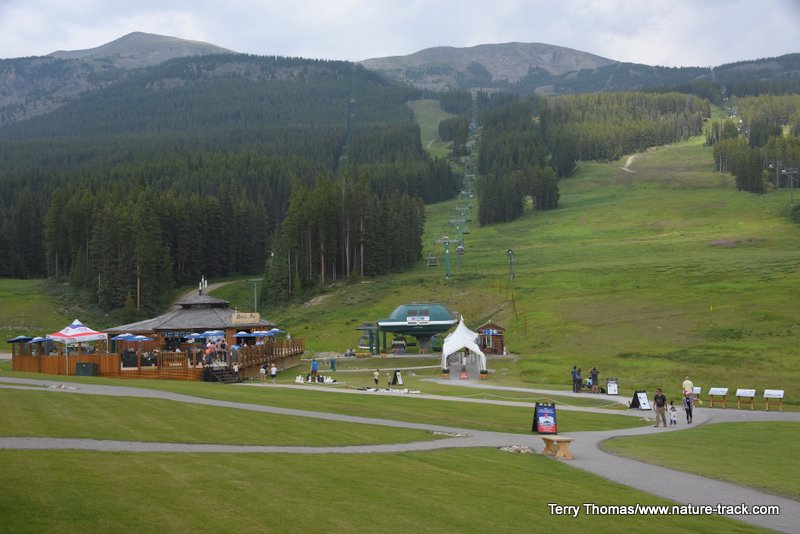 There are two trams in the area that will take you to the top of the mountains for spectacular views. One is at Banff, the other at Lake Louise. We decided to ride the Lake Louise tram and bought our tickets for $27 each, Canadian (after 4 p.m.). As with many well-made plans, this one fell apart when an electrical storm rolled in. The resort refunded our money though and this gave us the time to explore Yoho National Park a little more.

We were also disappointed with the lack of wildlife we saw along the Bow River Parkway that parallels Highway 1 between Banff and Lake Louise, especially because Highway 1 has several dozen wildlife overpasses. As we pulled up to the light at Highway 1 we saw a grizzly sow and two cubs and after we entered the Lake Louise area we saw a black bear but we were unable to stop for either of them. We hoped things would improve when we entered the Icefield Parkway and drove toward Jasper, Alberta, but that was not the case. Other than the bears, a few Columbian ground squirrels and one bald eagle, we are zero on wildlife in Banff. Did we just have too high of expectations?

Our favorite places in Banff were Peyto Lake, Bow Lake, Herbert Lake, Howse Pass overlook and a hidden slot canyon at the Bridal Veil Falls overlook. Even then, all of these are less crowded if you can see them before 0900. Before 0800 would be even better 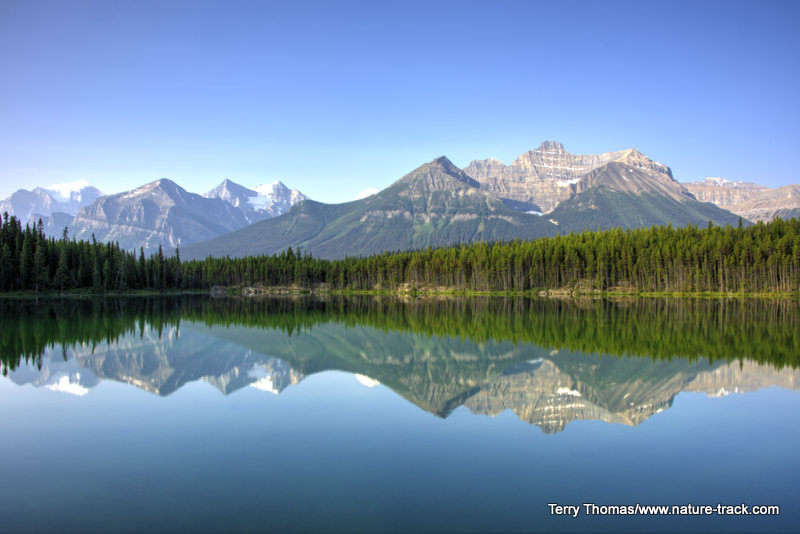 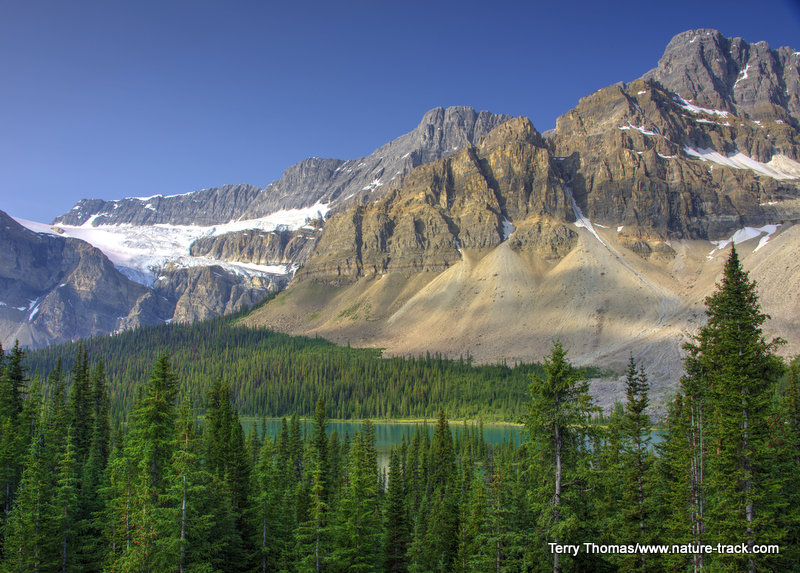 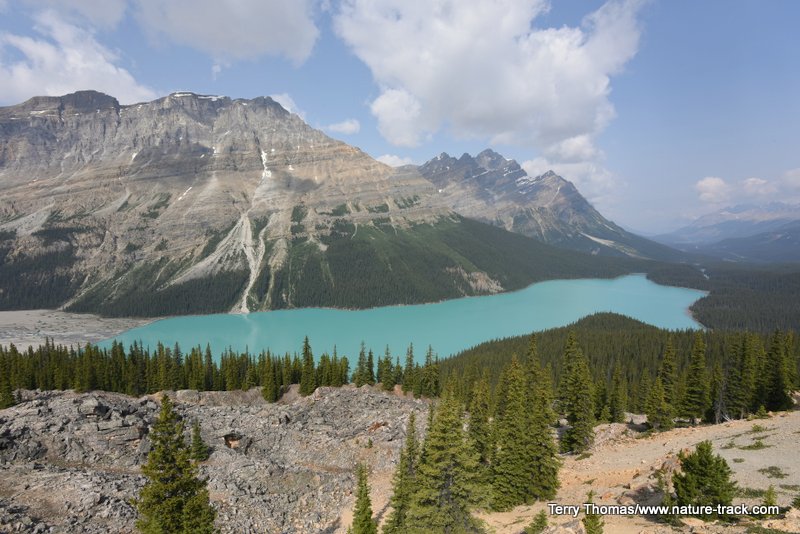 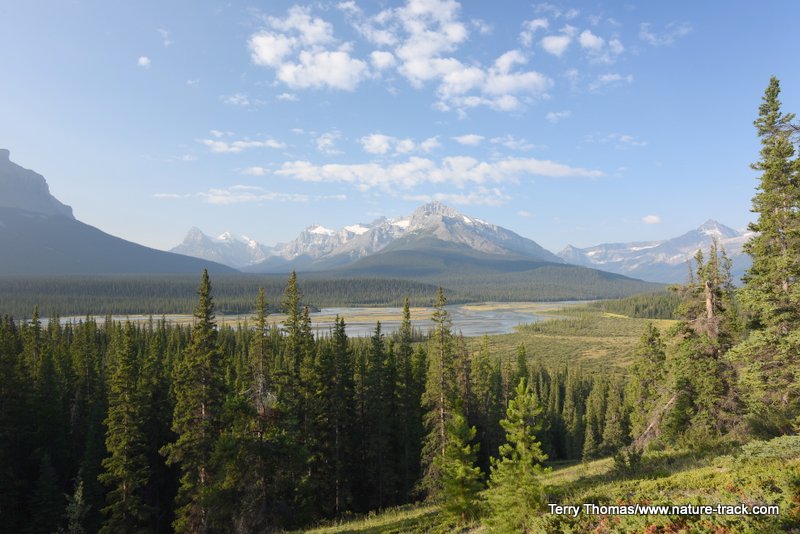 All of Banff is gorgeous, don’t get me wrong, but it is highly commercialized and the crowds were literally overwhelming. Part of the problem is that there is only one road and a very short visitor season to crowd in 1.5 million visitors. On a positive note, the roads were mostly in great shape with wide lanes and very wide shoulders ideal for safer cycling.

Temperatures were mild during our visit with mornings starting in the low 40’s and highs cresting at 78-80 Fahrenheit.

If I ever head north toward Banff again, I will start north of Lake Louise on the Icefield Parkway. I will probably pull a smaller trailer or just use a tent. I will also look for a campsite starting about 0900.