In Search of Western White Pines

We were off to find a giant. Somewhere on the Palouse River of North Idaho, there was a record Western white pine, a remnant of days gone by. At 200 feet tall and greater than six feet in diameter, it was a behemoth. It was ancient as well. It was a seedling when Columbus first bumped into the Americas.

We found that giant, but we were too late to be able to appreciate it alive. It succumbed in 1998 and now lay quietly on the forest floor. It was gone, like the rest of the giant white pines that once dotted Northern Idaho, Eastern Washington, Western Montana and Southern British Columbia.

The story of the Western white pine is a sad one. Once it was the most plentiful tree in North Idaho. Huge stands of giant trees dominated the landscape. But white pine is a desirable wood; straight grained, not prone to shrinkage or warping--it was perfect for door and window frames, and, of all things, matchsticks; billions and billions of them.

When lumbermen ran out of Eastern white pines in the Great Lakes states in the late 1800s, they turned their gaze west and spied the near virgin forests of Western white pine, or as they called it, king pine. Logging camps sprouted like mushrooms throughout the Western white pine range and a fury of harvest began. Hundreds of millions of boardfeet were felled each season and floated down rivers to waiting railcars.

As the white pine stands were succumbing to the saw, a new and even more devastating threat emerged. A timberland owner in British Columbia believed he could have seedlings needed for reforestation grown more cheaply in France. So, he sent off the seed and in due time received the seedlings he had ordered, along with a hidden pathogen, blister rust. From this single source, the fungus spread like a bucket of spilled milk, infecting white pines throughout their range. Blister rust almost always killed the tree, and remaining giants began to dwindle faster than the saws could find them.

Native currant and gooseberry shrubs turned out to be a great alternate host for the blister rust, spreading it into forests, just waiting for a white pine to dare and grow. Even though these shrubs are native, they have become the target of eradication programs in the name of saving the Western white pine.

Reeling from the blister rust attack, white pines were also ravaged by pine beetle outbreaks. Fire suppression was the final blow that brought white pine down. Without fires, competing conifers, more shade tolerant than white pine, overtook the forests once dominated by the Western white pine and created conditions where white pines could not grow.

Today, Western white pines, Idaho’s State Tree, hold on to less than five percent of their original range. Giants that escaped the saw, the blister rust and the beetle, are few indeed. Hopefully we’ve learned from its story a lesson about being so cavalier with a treasured natural resource. If Western white pines ever return to even a semblance of their former glory, maybe this time we won’t be willing to trade them for matchsticks. 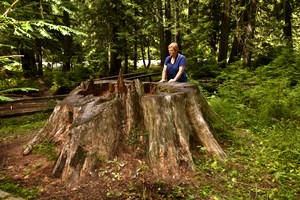 Cathy Thomas stands next to the sawn trunk of the former Idaho State Champion Western White Pine. It died in 1998 and is a record that will likely never be replicated.